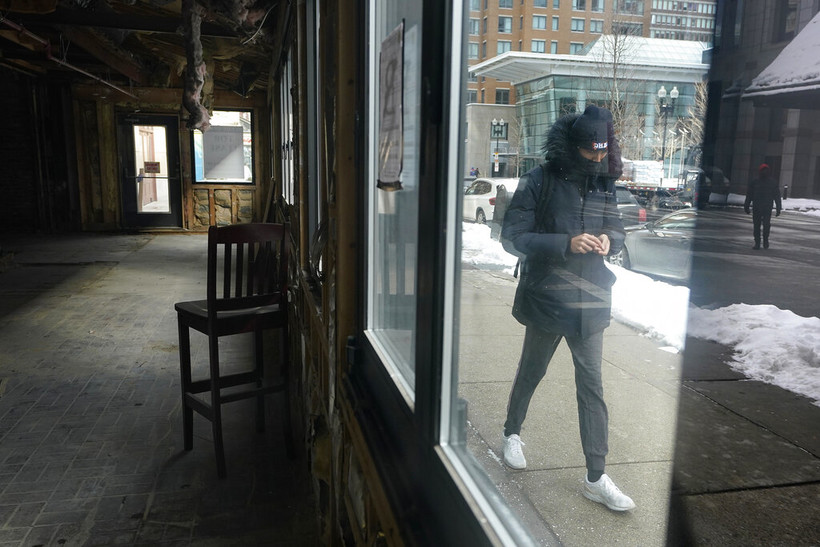 A passerby walks past an empty building that was formerly a restaurant in Boston, February 10, 2021. Steven Senne/AP Photo

Republican lawmakers are asking for information on how much of Wisconsin's unemployment insurance funding may have been lost to fraud.

In a June 17 letter signed by every Republican member of Wisconsin's congressional delegation, legislators asked Gov. Tony Evers, a Democrat, to respond to reports of unemployment benefits claimed by fraudsters. They cited a May memo from the Secret Service warning against a "massive" scheme by a "well-organized Nigerian fraud ring exploiting the COVID-19 crisis to commit large-scale fraud against state unemployment insurance programs." That memo didn't name Wisconsin as one of the states targeted by that specific scheme, but did note "it is extremely likely every state is vulnerable."

A spokesperson with the state Department of Workforce Development, which oversees the unemployment system, said in a statement that "Wisconsin has been a national leader at detecting fraud."

"The department has a variety of means to detect fraud and abuse, including but not limited to auditing employer records, comparing benefit claims to payroll records in Wisconsin and other states, exchange of information between agencies, complaints from employers and tips from the public," wrote DWD communications specialist Tyler Tichenor.

The spike in unemployment claims in 2020 as a result of the pandemic — followed by the massive federal relief efforts — overwhelmed state unemployment systems across the country, including in Wisconsin, and created fertile ground for some opportunistic scammers to claim money that wasn't theirs. A May report by the federal Department of Labor's Office of Inspector General estimated $39.2 billion in improper payments as of January, or about 10 percent of the $392 billion in federal jobless benefits from three separate programs.

Every year, states pursue some fraud cases against individuals who claimed funds they weren't eligible for. What is new is the presence of large-scale scams by organized criminal syndicates, including those operating in other countries, to claim United States unemployment funds. In May, announcing a new federal Department of Justice task force on the issue, President Joe Biden said the issue was among the most serious oversight issues his administration had inherited from the administration of former President Donald Trump.

The unprecedented spike in new jobless claims in 2020 led to long backlogs and a skyrocketing total number of payments. But according to the DWD's 2021 fraud report, both the number of cases of fraud and the total amount of fraudulently paid benefits actually declined in 2020. There were 4,734 fraud cases in 2019, and just 3,561 in 2020. It accounted for about $4.7 million in 2019 and $4.5 million in 2020, according to the department.

One interpretation of that data, said economist Noah Williams of the conservative Center for Research on the Wisconsin Economy at the University of Wisconsin-Madison, is that "fraud detection basically dropped to near zero" in 2020.

"We had a huge explosion in claims in 2020, but the actual cases in the state that were referred for fraud fell," Williams said. "We don't know how big the problem is, but ... I wouldn't have expected the absolute number of cases to fall."

In a report Williams authored in May, he wrote Wisconsin "was one of the worst-performing states" by several metrics of measuring its unemployment insurance system. The issue has been hotly debated by state lawmakers, including calls from Evers to fund upgrading the DWD’s outdated computer software.

In the DWD statement, Tichenor wrote the department estimates it has prevented more than $114 million in fraudulent payments since June 1.

"While we are unable to provide a more inclusive number due to a variety of factors," he wrote, "this number represents a very conservative estimate of the effectiveness of our fraud prevention strategies."

Among the scams DWD has warned against are forms of email phishing that appear to be communications from the state in attempts to trick people into providing personal data. In March, Milwaukee's WITI-TV reported on a Milwaukee woman who was the victim of identity theft, whose name was used to claim fraudulent unemployment benefits in Massachusetts and Nevada.