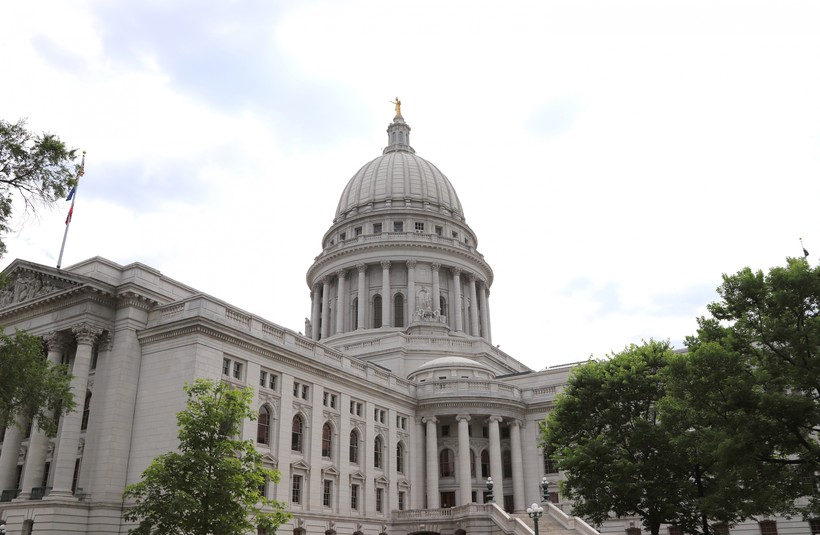 The eastern view of the Wisconsin State Capitol in Madison. Steven Potter/WPR

Republicans who run the Legislature's budget committee used a forum with Wisconsin's superintendent of schools Tuesday to criticize federal school aid payments during the coronavirus pandemic, suggesting it could play a role in the education budget they pass later this year.

Gov. Tony Evers called for increasing state funding for schools by roughly $1.6 billion in his latest budget proposal. That's on top of the $2.2 billion in federal funding set aside for Wisconsin schools through multiple coronavirus relief packages passed over the past year, both under former President Donald Trump and President Joe Biden.

A memo released Tuesday by the Legislature's nonpartisan budget office showed a wide range between districts when it came to how much of that federal funding they received, with Milwaukee Public Schools receiving roughly $797 million or $11,242 per pupil.

State Sen. Howard Marklein, R-Spring Green, one of the co-chairs of the budget committee, said that was more than five times as large as the $2,213 per pupil in federal funds going to Lancaster Community Schools in his Senate district. During a budget briefing Tuesday, Marklein told state Superintendent of Public Instruction Carolyn Stanford Taylor that Lancaster had been instructing kids in-person while Milwaukee instruction had remained largely virtual during the pandemic.

"I guess my question to you is: Is that fair?" Marklein asked.

But for the most part, the decision on how to spend that funding is out of the state's hands. Ninety percent of the school funds in both the Trump and Biden relief plans were distributed using a formula that prioritizes districts with high poverty levels, according to the Legislature's budget office and the Department of Public Instruction.

"These are one-time dollars that were given to states to help address the issue of the pandemic," Taylor said. "Different people have had different approaches."

Taylor stressed that the federal funding should not affect the rest of the governor's education budget, including his nearly $710 million increase in special education funding.

Schools are required by federal law to fund the full cost of special education, meaning whatever they don't get from the state they have to make up elsewhere. Right now, the state is reimbursing about 28 percent of special education costs, according to the governor. Evers' budget would increase that to 50 percent.

"This is money that's going to be spent," said Rep. Evan Goyke, D-Milwaukee, who sits on the budget committee. "It's just a matter of which programs are going to be cut locally if the state doesn't increase its reimbursement."

Republicans approved a roughly $500 million increase in state funding for schools in the last budget, which was about $900 million less than Evers wanted. While they've yet to indicated how much they're willing to spend on schools in the current budget, they have indicated it will be smaller than the governor's plan.

Just how much smaller, they say, could hinge in part on federal school funding, and how Evers spends an additional $3.2 billion in federal funds for state government.

"The federal money is definitely impacting things," said budget committee co-chair Rep. Mark Born, R-Beaver Dam. "Education's a priority, but we need to figure out how this federal money impacts that."

Taylor said the federal funding had helped schools weather the pandemic, sometimes with one-time projects like improvements to their ventilation systems. But she said that challenges that existed before, like an achievement gap for students of color, could be worse once the pandemic is over.

"The impact of COVID on those students will continue beyond the next few years," Taylor said. "My plea to you is that we forecast out and recognize the continuing needs of our districts."

Marklein also pressed Taylor on how her agency had operated during the pandemic. She said that before COVID-19, around 400 employees might be working in DPI's downtown Madison office building. She said that fewer than 10 were probably working in-person Tuesday with the vast majority working remotely. The agency would start to bring staff back on April 16, she said.

"How would you characterize the productivity of your staff working remotely in the last year?" Marklein asked.

"I don't know that we've missed a beat," Taylor said.

The head of the state Department of Workforce Development said Tuesday the department still needs at least $79 million in state funding to upgrade the technology behind Wisconsin's unemployment insurance system, despite millions in federal aid dollars that have come to the department.

The technology underpinning Wisconsin's unemployment system was developed in the 1970s and has been blamed for substantial delays in unemployment benefit payments during the pandemic.

During testimony before the finance committee, DWD Secretary Amy Pechacek said guaranteed funding from the state is necessary to ensure the technology upgrades are completed.

"The project is potentially subject to fail if we don’t have a dedicated funding source to complete it," she said.

Pechacek said attempted system upgrades in 2009 were unsuccessful and abandoned because there wasn’t a long-term, dedicated state funding source.

Evers' state budget proposal calls for roughly $79 million a year for unemployment system upgrades. The governor's plan would also require DWD to use any federal money available for the project before tapping into state funds.

According to DWD, the agency has received about $59 million in federal COVID-19 aid since the beginning of the pandemic. A recent, $2.4 million federal grant allowed the department to reallocate existing state funds and hire a consultant to begin the process of unemployment system upgrades.

During testimony, Born, the committee co-chair, pushed back on the call for more state money, saying additional federal money could come to the department and be used for the project.

He criticized the department for being "inconsistent," arguing it should be more transparent about the possibility of federal money coming in.

The department says it doesn’t have additional information and can’t be certain that money will appear.

In February, the Legislature passed a bill that requires DWD to begin the upgrades by June 30. The bill didn’t allocate any state funding to the project.