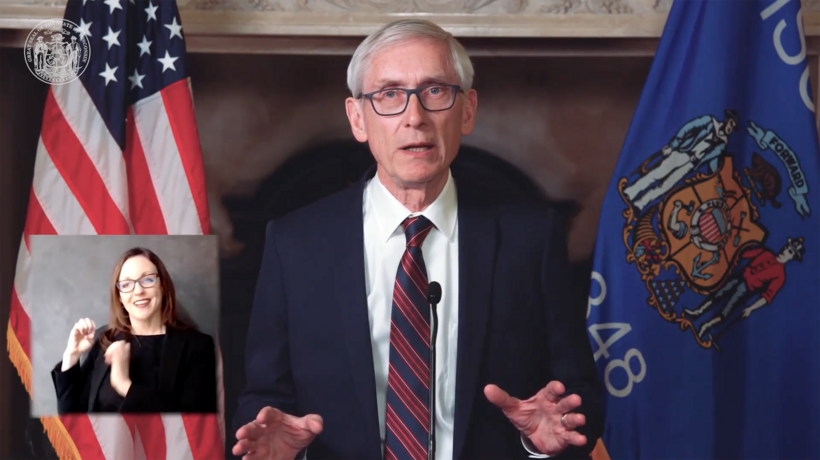 From An Infusion Of School Funding To A Partial Repeal Of Act 10, Plan Faces An Uphill Climb With GOP Lawmakers
By Shawn Johnson and Laurel White
Updated:
Tuesday, February 16, 2021, 8:35pm
Share:

Promising to help Wisconsin "bounce back" from the COVID-19 pandemic, Gov. Tony Evers proposed a $91 billion state budget Tuesday, an ambitious plan that would boost overall spending by almost 10 percent, infuse hundreds of millions of dollars in Wisconsin schools and reinstate some of the union bargaining rights lost by public sector workers a decade ago.

The two-year budget, which would lay the foundation for Evers' reelection should he seek a second term, includes a wide array of policies many Republicans who run the Legislature are likely to resist — from the legalization of recreational marijuana to the expansion of Medicaid.

The governor would pay for the spending increases in a number of ways, including limiting a tax credit for some manufacturers and increasing capital gains taxes on high-income individuals. Overall, the Evers administration said the budget would increase revenue by $1.6 billion. At the same time, taxes would be cut elsewhere by about $590 million for groups that include caregivers, parents and low-income residents.

"Wisconsin, we aren't going to retrace our steps back to the way things were," Evers said during his Tuesday evening address. "We aren't going to follow the map back to where we started when this pandemic began. After all we've been through, we aren't going to apologize for wanting more for each other — for our neighbors, for our kids, our parents and grandparents, and our state's future."

Evers' proposals need the approval of the Republican-controlled state Legislature to become law. During the last budget cycle — Evers' first as governor — GOP lawmakers rejected major pieces of the governor's proposal as too expensive and started from scratch with their own plan.

At the same time, there are provisions in the governor's budget proposal this year that could be more difficult for Republicans to reject, from a $200 million investment in broadband to a $200 million fund aimed at helping businesses recover from the pandemic.

Education would be the largest driver of new spending in Evers' budget. His proposal increases state funding for K-12 schools by more than $1.6 billion over the next two years.

That's even more than Evers’ proposed $1.4 billion spending bump in the last budget, which was sharply scaled back by the Legislature.

Ultimately, the Legislature approved a $500 million increase for K-12 education in the last budget. Evers used his veto pen to increase that to about $570 million.

During his address, Evers argued education is crucial to the state's successful economic and social recovery from the pandemic.

"If we're going to bounce back from this pandemic, then we have to start by making sure our kids are better off than when we started this pandemic," he said.

Evers would also increase state spending on a variety of education programs, including a $47 million boost to mental health aid for schools.

The governor's budget would let school districts increase local revenue limits by $200 per pupil in the first year of the budget and $204 in the second.

Taken as a whole, his budget would return Wisconsin to the days when the state covered two-thirds of the funding for public schools, a benchmark initiated by former Republican Gov. Tommy Thompson in 1997 and repealed by former Democratic Gov. Jim Doyle during a budget shortfall.

For higher education, the governor's office said Evers was proposing the largest overall increase in university spending in the past two decades.

Evers' budget would increase state spending on the University of Wisconsin System by about $192 million over the next two years. The governor would continue the UW System tuition freeze and backfill it with more than $50 million in state funding to offset the lost tuition revenue.

The governor would also boost UW funding in other ways, including a $40 million increase in general operation funding and about $39 million to expand a program started on the UW-Madison campus to provide low-income resident students with free tuition. He'd also dedicate $10 million in state funding on mental health programs at the UW.

In addition to directing $200 million to small businesses struggling during the pandemic, funds that will be funneled through the Wisconsin Economic Development Corp. (WEDC), the governor’s spending plan would create a $100 million venture capital program aimed at spurring the growth of startup businesses across the state.

In his address, Evers noted WEDC would receive more in this proposal than in the last three state budgets combined.

"We know that if we want to come out on the other side of this pandemic stronger than ever, we need to commit to investing in innovation and economic growth," he said.

Amid continuing political disagreement over the state's unemployment system, which struggled to keep pace with unprecedented claims over the past year, the governor also called for $79.5 million to modernize Wisconsin's unemployment insurance system, along with $15 million to pay for increased staffing brought on by the pandemic.

Republicans removed many of the governor's policy proposals from the previous budget and his latest budget proposal includes a number of measures the GOP-controlled state budget committee is likely to quickly eliminate from the spending plan.

That includes a new proposal unveiled Tuesday that would reinstate some of the collective bargaining rights lost by unions during Gov. Scott Walker's Act 10 legislation in 2011.

Under the plan, qualifying "front-line workers'' would be able to collectively bargain. The plan defines those workers as "employees with regular job duties that include interacting with members of the public or large populations, or directly involves the maintenance of public works."

It would also eliminate an Act 10 requirement that recertification be approved by a majority of union members rather than just a majority of those voting.

The governor would also legalize recreational marijuana in Wisconsin, something GOP leaders have long said is a non-starter. Evers proposed legalizing medical marijuana in the last budget, which was unsuccessful.

During the last budget cycle, the Legislature's powerful state budget committee stripped dozens of the governor’s policy proposals from the budget early in the negotiation process.

"The budget's kind of built on a house of sand if you have all of these revenues that you know are never going to happen," said Assembly Speaker Robin Vos, R-Rochester. "So it seems like it wasn't a serious effort."

"I don't think the governor has learned his lesson at all," said Senate Majority Leader Devin LeMahieu, R-Oostburg.

"They've had two years to put together a reelection budget, and they've directed their agencies and their cabinets and their budget shop to incorporate every bit of political talking point garbage that they could come up with, put it in a document and sent it over to us," said Rep. Amy Loudenbeck, R-Clinton. "So, again, we have to be the adults in the room."

In addition to some of the big ticket items, the governor's budget includes a wide range of proposals, some of which Evers introduced for the first time Tuesday. They include:

Evers' budget also includes a long list of proposals Republicans eliminated from his budget two years ago. They include: