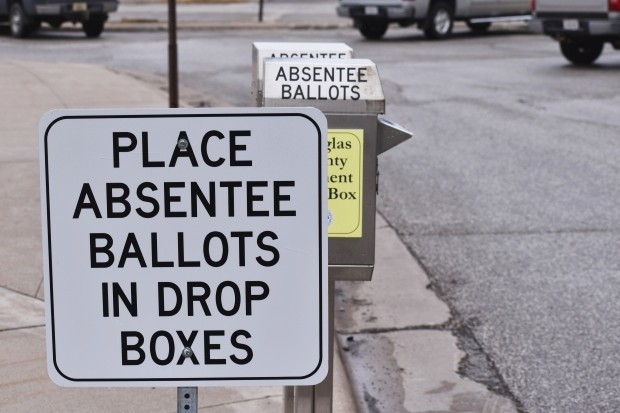 Superior had a drop box for absentee ballots outside the city's government center polling location in 2020. Danielle Kaeding/WPR

The Plan Passed The Bipartisan State Elections Commission On A 6-0 Vote
By Shawn Johnson
Share:

The state will mail out 2.7 million voters absentee ballot applications under a plan given final approval Wednesday by the Wisconsin Elections Commission.

Members of the commission, which is split evenly between Republicans and Democrats, voted 6-0 to go ahead with the mailing despite a last-ditch effort by a Republican state lawmaker to stop it.

Their decision means letters will be sent by Sept. 1 to nearly all registered voters in Wisconsin who have not already asked for absentee ballots. The only exception will be about 158,000 voters whose names were flagged by a multi-state government database as having potentially moved.

The state Department of Administration will begin printing the mailings this month, and then store them so that they're all sent out to voters at roughly the same time. Wolfe said there will be enough applications to fill three semi-truck trailers.

The mailing will be paid for with about $2.3 million in federal funding set aside for election safety measures as part of the massive coronavirus relief package that Congress passed and that President Donald Trump signed in late March.

For Wisconsin election officials, it's a chance to expand on what worked for the April election, and to address issues ahead of a much higher-turnout election in November.

A record 964,433 Wisconsin residents, or 62 percent of all voters, cast ballots by mail in Wisconsin's April election as both the state and federal governments warned people to stay home to avoid large crowds that could spread COVID-19.

While the vast majority of mail-in ballots were cast and counted without problems, a last-minute surge in ballot requests did cause some issues. Clerks reported being overwhelmed with processing the ballots, some ballots got hung up in the postal system and others were returned too late to be counted.

Were it not for a ruling by a federal judge extending the state's deadline for absentee ballots, roughly 79,000 mail-in ballots would not have been counted.

Since that time, the push for absentee ballots has grown more partisan on the national level, with Trump at one point threatening to withhold federal funding from the state of Michigan after it announced plans to send absentee ballot applications to its voters.

"While we believe that the proposal is well-intended as a response to the COVID-19 pandemic, we are concerned about the ramifications of sending a massive mailing to voters who have not requested an absentee ballot," Gundrum wrote in the letter.

Gundrum's letter voiced concerns about overwhelming clerks with absentee ballot requests, although much of the work for handling this mailing will be handled by staff working for the Wisconsin Elections Commission.

The commission also voted 4-2 last month to spend up to $4.1 million in federal funding on grants to local clerks to help offset the cost of a likely surge in absentee voting.