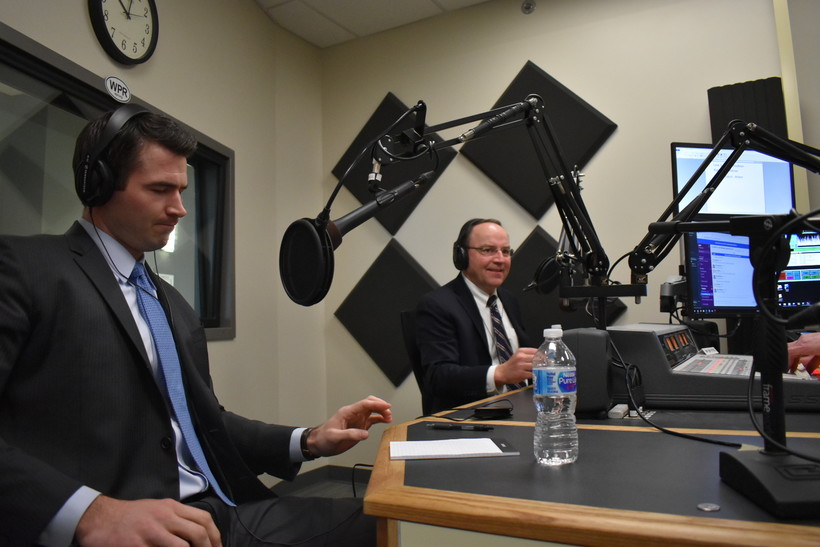 Tom Tiffany, Jason Church Squared Off In A Debate Broadcast By WPR
By Rob Mentzer
Share:

Republican candidates in Wisconsin's 7th Congressional District leaned into their biographical differences in a debate Thursday that saw few disagreements on policy.

State Sen. Tom Tiffany and Afghanistan War veteran Jason Church appeared on WPR for a debate broadcast across the district, which encompasses central and northwestern Wisconsin. A primary in the special election, called following the resignation of former U.S. Rep. Sean Duffy in September, will happen Feb. 18. The general election will be May 12.

In the absence of policy disputes, Tiffany and Church made separate pitches to voters based on their different life experiences. Tiffany spoke about growing up on a dairy farm, owning a small business and serving as a legislator where, he said, "I have a proven record as a reformer."

Church, who lost both his legs in an explosion in Afghanistan, said he wants to represent the 7th out of a desire to remain in public service.

"I never wanted to be in politics," Church said in a closing statement. In a swipe at Tiffany, who served in the state Assembly, then ran for state Senate and now is running for Congress, Church added, "I'm not trying to climb a ladder. I don't want to do this forever. ... I'm someone who wants to serve in a time when we as a country need it most."

Tiffany has accrued the endorsements of a number of influential conservative leaders and organizations, including Duffy, former Gov. Scott Walker, the National Rifle Association and, also on Thursday, the U.S. Chamber of Commerce.

The Republican nominee will face either Wausau School Board president Tricia Zunker or insurance salesman Lawrence Dale in the general election. The Democratic candidates appeared on WPR on Jan. 30 for a debate with the same format.

In October, U.S. Agriculture Secretary Sonny Perdue told the World Dairy Expo in Wisconsin that "In America, the big get bigger and the small go out." Small dairy farmers have protested that message, and the GOP candidates took the rare step of distancing themselves from the Trump administration when asked about Perdue's comments.

"With respect to Sonny Perdue, he's not from here," Church said. "He doesn't know how tough we are here in northern Wisconsin."

"There is a place for small farms here in Wisconsin," Tiffany said. "I think we've seen a ray of hope here in the last month with what President Trump has done with the trade accords," referring to a preliminary agreement with China and the passage of the United States-Mexico-Canada Agreement.

The GOP candidates oppose gun control measures such as universal background checks and red flag laws that can permit courts to order temporary removal of guns from those found to be a danger to themselves or others. They both pledged to defend the Second Amendment, and steered a question about U.S. response to mass shootings to a discussion of mental health programs.

"We've done something about this in Wisconsin," Tiffany said. "I voted for additional funding for mental health concerns ... I think that's very important."

"In the veteran community, we've gotten better at it," Church said. "We've gone away from the issues of 'shell shock' and post-traumatic stress disorder to realize that (mental health) is a problem and a wound that needs to be addressed, and we need to do the same thing in our societies and schools."

When then-candidate Trump ran in 2016, he linked one of his slogans, "Drain the swamp," to a specific five-point plan on ethics reform that included a five-year ban on lobbying for former members of Congress and top staffers. At a Green Bay rally in October 2016, Trump called for "a campaign finance reform that prevents registered foreign lobbyists from raising money in American elections and politics." Neither of those policies have become law, and there's no record of the Trump administration pushing for them.

In response to a question about what anti-corruption reforms they would sponsor in Congress, both candidates said they didn't consider "drain the swamp" to be about ethics reform at all, but rather about limiting the powers of federal bureaucracies.

"Actually, when I hear 'drain the swamp' from President Trump, I hear about reining in the bureaucracy that is out there that runs our daily lives," Tiffany said. He advocated for eliminating "the red tape that strangles businesses and individuals."

Church agreed that "drain the swamp" was not an anti-corruption slogan.

Trump "has fought back against people who've been within the entrenched bureaucracy," Church said.

The debate was moderated by Shereen Siewert, host of WPR’s "Route 51," and Robin Washington, host of the Superior-based WPR talk show "Simply Superior."