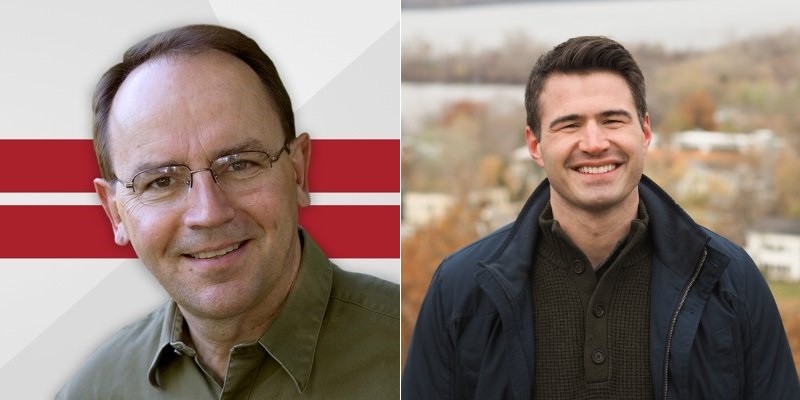 In their first debate Thursday, the Republican candidates in the 7th Congressional District special election sparred over which of them would be a closer ally of President Donald Trump.

The debate in Wausau was hosted by a conservative activist group and brought state Sen. Tom Tiffany, R-Minocqua, together with Afghanistan war veteran Jason Church, of Hudson. They're both running to succeed former U.S. Rep. Sean Duffy, who resigned from Congress in September.

The candidates defended their conservative bona fides on a range of issues, from anti-abortion activism to pro-gun rights positions. Tiffany analogized the ongoing impeachment hearings against Trump to the 2012 recall elections targeting then Republican Gov. Scott Walker.

"I was right with Gov. Walker, fighting off those recalls, and I'll do the same with President Trump," Tiffany said.

The sharpest disagreement of the night between the candidates came on an obscure issue. The federal prevailing wage law requires the government to pay higher wages on construction projects. The law, known as the Davis-Bacon law, is supported by labor unions. Tiffany supports its repeal, saying it leads to higher costs to taxpayers for infrastructure projects. He pointed out that Wisconsin repealed prevailing wage laws for state projects, and said the federal government should do the same.

"So, if you want to say you stand with President Trump, put your money where your mouth is on this one," he said.

In early 2017, Trump said he would be making an announcement about the law, but the announcement never came, and the administration hasn't pushed for its repeal.

Church took a number of sharper, more ideologically conservative positions in the debate. He said spending on Medicare has "grown completely out of control," and called for changes to Social Security for future retirees, while emphasizing that Americans who've already paid into the system shouldn't lose their money. He said the federal government shouldn't subsidize college loans, and he railed against bureaucratic practices within the Veterans Affairs health care system, which he receives as a veteran and which he called socialized medicine.

Tiffany emphasized his legislative record, including votes in the Legislature to defund Planned Parenthood and outlaw late-term abortions and efforts to opt out of the federal Common Core educational standards. He joined the state Legislature as part of the 2010 conservative wave that brought Gov. Scott Walker into office.

"I've made those tough decisions, and I’ll make them out there in Washington, D.C., also," he said.

The district, which includes Wausau, much of the Northwoods and all of northwestern Wisconsin, voted heavily for Trump in 2016.

In a statement, Tricia Zunker said of Tiffany and Church that "their priorities do not reflect solving the important everyday concerns that exist in households, farms and small businesses throughout the 7th District. While my opponents were busy fighting each other, our campaign was out meeting with voters across the district and listening to the issues that matter here in Northern Wisconsin."

The other Democratic candidate in the race is Lawrence Dale, a former Green Party candidate who lived in Michigan shortly before launching his candidacy.

The group that hosted the Republican debate was the No Better Friend Corp. It's run by Kevin Nicholson, a business consultant from Delafield who ran for U.S. Senate in 2018; he lost in the Republican primary to former state Sen. Leah Vukmir. Nicholson has hinted that he is interested in running for statewide office in Wisconsin in 2022.