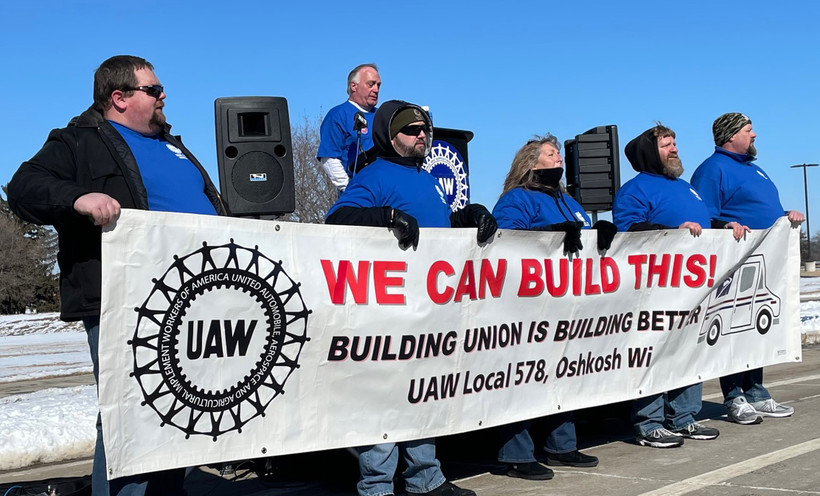 United Auto Workers union members hold a banner at a rally in Oshkosh as local union President Bob Lynk speaks, Saturday, Feb. 26, 2022. The union and supporters held the rally as part of a campaign to pressure Oshkosh Defense into bringing 1,000 jobs to Wisconsin instead of South Carolina.Â Rob Mentzer/WPR

'Good jobs are worth fighting for': Union workers rally support for bringing 1K jobs to Wisconsin

The United Auto Workers union in Oshkosh is in "the fight of our life," a local leader said, to reverse a decision by Oshkosh Defense to locate more than 1,000 jobs in South Carolina rather than Wisconsin.Â

Union members and supporters rallied Saturday outside the company's headquarters, calling on corporate leaders to commit to manufacturing next-generation U.S. Postal Service vehicles locally. The company, which also builds military vehicles, last year won the contract from the USPS. In July, it said it would build the vehicles in South Carolina.Â

That's a blow to the local workforce, including some 1,600 UAW members, which had hoped the new contract would expand its ranks in Wisconsin. As recently as 2012, the union had more than 3,000 members. Many in the union see the decision to build a new facility with a non-unionized workforce in South Carolina as a sign that the company could be planning to relocate more jobs in the future.

"Many times, we're told that good jobs are worth fighting for," said Bob Lynk, president of the UAW Local 578. "Well, that fight is now. We need to fight to secure our future."

The issue has become a part of Wisconsin's 2022 U.S. Senate race since U.S. Sen. Ron Johnson, a Republican from Oshkosh who is seeking a third term in office, said this month that he didn't support efforts to pressure the company to bring the jobs to Wisconsin.Â

"It's not like we don't have enough jobs in Wisconsin," Johnson told reporters this month.Â

At Saturday's rally, Democratic candidates for Senate lined up to bash Johnson for those remarks.Â

"He says Wisconsin workers just aren't up to the task," said Lt. Gov. Mandela Barnes. "It feels like he's working harder for them than he's working for us."

Wisconsinites should tell Johnson, "You can go work in South Carolina, but we need someone who's working for us here in Wisconsin," said Milwaukee Bucks executive Alex Lasry.

"You deserve a senator who has your back," said State Treasurer Sarah Godlewski. "I don't think that's too much to ask."

For his part, Johnson in a blog post on a campaign website wrote that Oshkosh Defense had to locate manufacturing in South Carolina due to the federal contract's facility requirements. He also pointed to a Wall Street Journal editorial that praised him for "refusing to bully" the company.Â 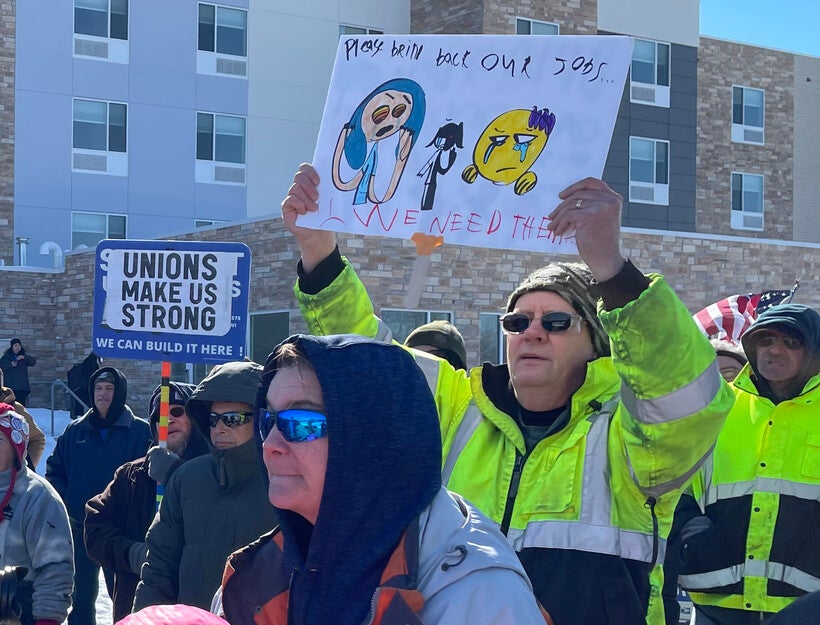 It's not clear whether the pressure campaign will sway Oshkosh Defense, which is part of the larger Oshkosh Corp. that employs some 14,000 people.Â

"Letâ€™s be honest," said Outagamie County Executive Tom Nelson, a U.S. Senate candidate who spoke at the rally. "(Organized labor) is often the underdog, as we are today."

In his comments at the rally, Lynk said the company told the union that its decision is final.

State Rep. Gordon Hintz, a Democrat who represents Oshkosh and is a board member of the Wisconsin Economic Development Corp., said the state tried to ensure that the manufacturing would happen in here.

In a statement, Oshkosh Defense spokesperson Alexandra Hittle said the company "evaluated sites in multiple states, including Wisconsin" for the new contract.Â

"We value the longstanding and skilled workforce we have in Wisconsin and are committed to growing our local presence," she said. A new technical center in Oshkosh will include more than 100 new jobs for engineers and other support positions for the new contract.

Union member John Stanchik, who sported a sign with art by his 9-year-old daughter Reanlyn, said he thinks there is still a chance. He pointed to fight over a 2009 contract for military vehicles.

Editor's note: This story has been updated after state Rep. Gordon Hintz, D-Oshkosh, said he spoke in error at Saturday's rally when he said Oshkosh Defense treated locating in Wisconsin "off the table."

Wisconsin Public Radio, Â© Copyright 2023, Board of Regents of the University of Wisconsin System and Wisconsin Educational Communications Board.