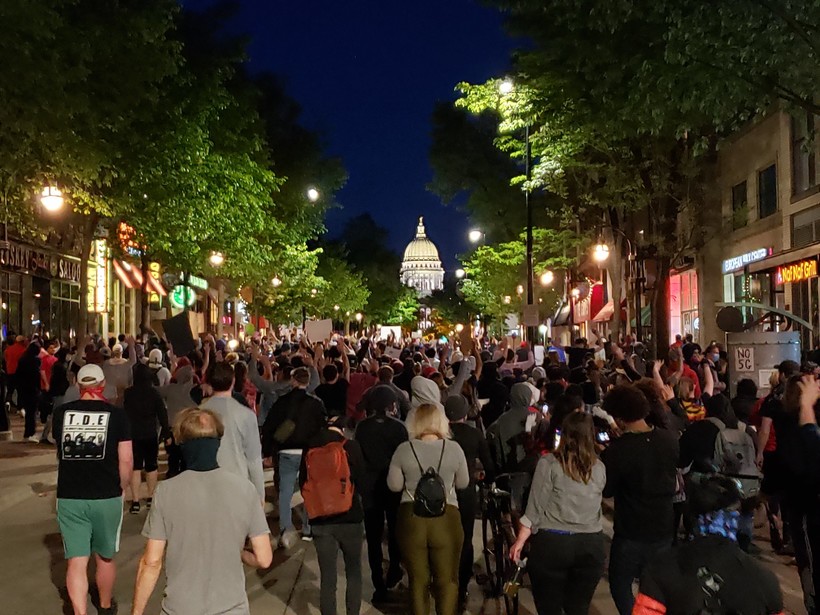 Marches and gatherings over the killing of George Floyd, a Minneapolis man who died in police custody last week, continued Sunday across Wisconsin — including in Madison and Milwaukee, where hundreds defied curfews to protest into the evening.

In Milwaukee, protesters gathered for a number of events to demonstrate against Floyd's death and to mark other African Americans who have died at the hands of police. A prayer protest was held in Washington Park while a march was organized on the city's northwest side.

A downtown rally that began at Red Arrow Park at 5 p.m. stretched well into the evening, past the 9 p.m. curfew imposed by Milwaukee Mayor Tom Barrett. The protesters — both on foot and in cars — gathered in several locations before meeting in front of the police department's headquarters to march and drive through the city until after midnight. 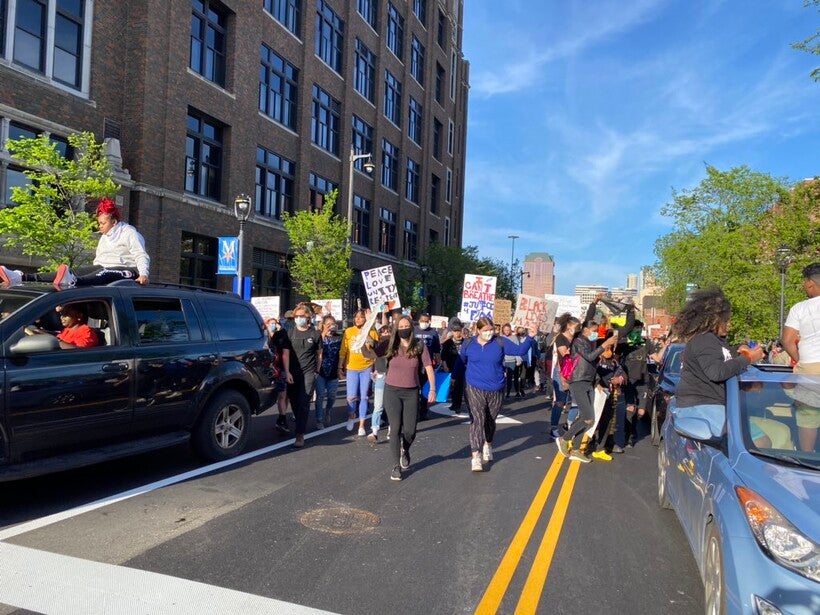 In Madison, hundreds of protesters gathered Sunday evening at the state Capitol, before marching up and down State Street and around the Capitol Square. Many stayed out past a curfew that began at 9:30 p.m., and riot police and Wisconsin National Guard troops were deployed downtown and sought to disperse the crowds with tear gas and pepper spray.

Other protests were held throughout the day around the state. Eau Claire community organizers held a virtual vigil on Zoom at 3 p.m. Sunday to honor the memory of Floyd, an event organized by University of Wisconsin-Eau Claire Professor Selika Ducksworth-Lawton.

Based on news reports and social media posts around the state, there have also been protests in Green Bay, Janesville, West Bend and Beloit.

Two hours after the city's curfew began, Milwaukee police started warning protesters they would make arrests and tow vehicles. Some arrests were observed as authorities sought to enforce the curfew.

The crowd originally marched from Red Arrow Park in Milwaukee. Two groups of protesters met up at the Police District One building downtown before heading east and through the lakeside neighborhoods of Northpoint and Murray Hill.

Cars have been driving on the sidewalk down Lake, and off and on before. Some homeowners aren’t happy about it — I heard a woman say “you have no right to be up here.” Some of the protesters are now helping guide cars off and back into the road, which is packed pic.twitter.com/8apX2MZVDK

Protesters who marched to the Milwaukee police headquarters faced off against police in riot gear. There were more law enforcement officers surrounding the station than were monitoring Saturday afternoon's march in the area.

Hundreds of protesters chanted "Hands up! Don't shoot!" Some in the crowd held up signs saying "#JusticeForJoel" — referring to the death of 25-year-old Joel Acevedo, a Milwaukee resident who died from injuries allegedly sustained in a fight with off-duty Milwaukee police officer Michael Mattioli. 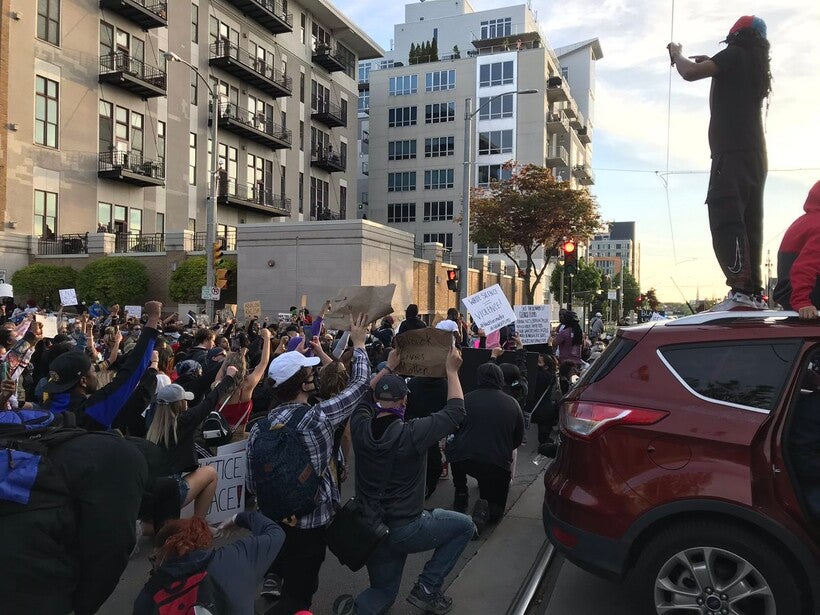 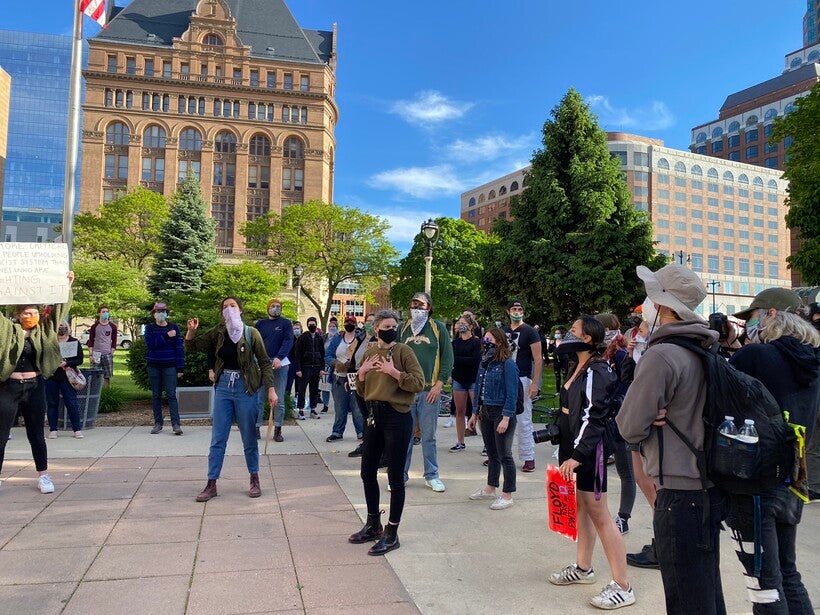 At the intersection of Ogden Avenue and Van Buren Street, some in the crowd took a knee, echoing the silent protests that sparked controversy in recent years when some NFL players knelt during the national anthem to bring attention to racial inequality and police brutality.

The march continued on into the evening, initially toward the city's lakefront, before heading north toward residential areas in the upper east side.

Red Arrow Park, where the march began, has special significance to many in Milwaukee: It is where Dontre Hamilton was shot and killed by a Milwaukee police officer during a confrontation in 2014.

Former officer Christopher Manney found Hamilton lying on the ground in the park and Manney shot Hamilton after Hamilton grabbed Manney's baton during a pat-down search. Charges weren't filed against Manney, and he was later fired from the police. Then-Police Chief Ed Flynn fired him for violating department pat-down policies. The city's police and fire commission upheld the firing. Hamilton's death resulted in a $2.3 million settlement to his family.

Many of the demonstrators were chanting "Black Lives Matter" and for Floyd and Hamilton.

A 22-year-old protester, identified only as Josiah, said he was on his second march of the weekend, but said he had been protesting against police brutality much longer.

"I've been protesting since I started going to (the University of Wisconsin-Milwaukee) five years ago, and I just graduated and I'm still protesting. Like same s---, different day, different year," Josiah said.

The Sunday evening demonstration in Madison followed a larger, peaceful protest in the area Saturday afternoon, which later turned violent with property damage and looting. 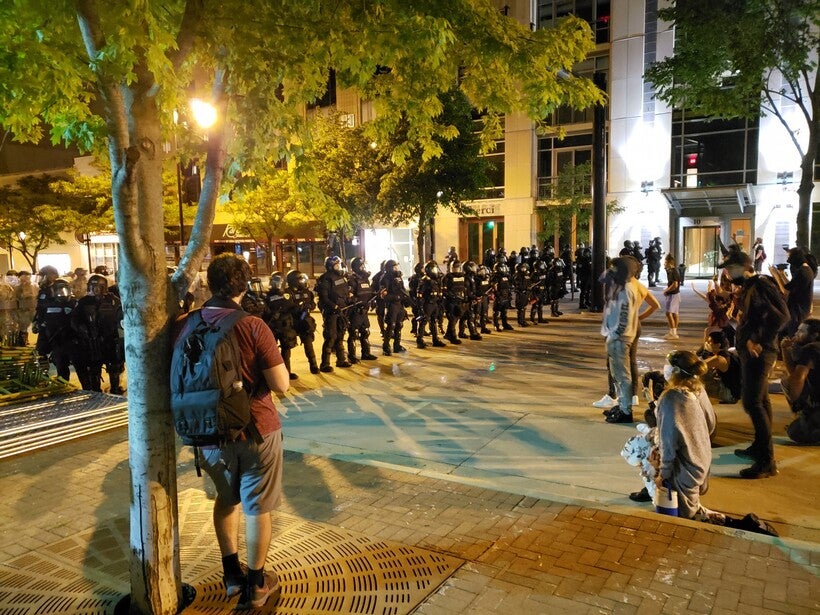 Police face off against protesters in downtown Madison on Sunday night. Shawn Johnson/WPR

On Sunday evening, protesters repeatedly marched up and down State Street and around the Capitol Square, chanting "Silence is violence" and "I can't breathe," occasionally confronting groups of police officers deployed to the area.

Unofficial estimates about the size of the crowd put it at about 300 people.

At around 10 p.m., police deployed tear gas on the Capitol Square, and officers in riot gear, along with Wisconsin National Guard troops, began mobilizing in the area.

Tear gas is out in Madison. pic.twitter.com/hjnyoKelSG

The crowd in Madison is getting bigger and louder as we near the 9:30 curfew. pic.twitter.com/nZyxkJeXs9

The more experienced protesters are giving tips on what to do if people get arrested after the 9:30 curfew in Madison. Telling them to have a 608 number to call from jail & remember all the details of their arrest. pic.twitter.com/2UxEAtfHxr

At various points, law enforcement and demonstrators confronted each other. Police used pepper spray to push the crowds back or shot tear gas canisters near the crowds as protesters threw them back. 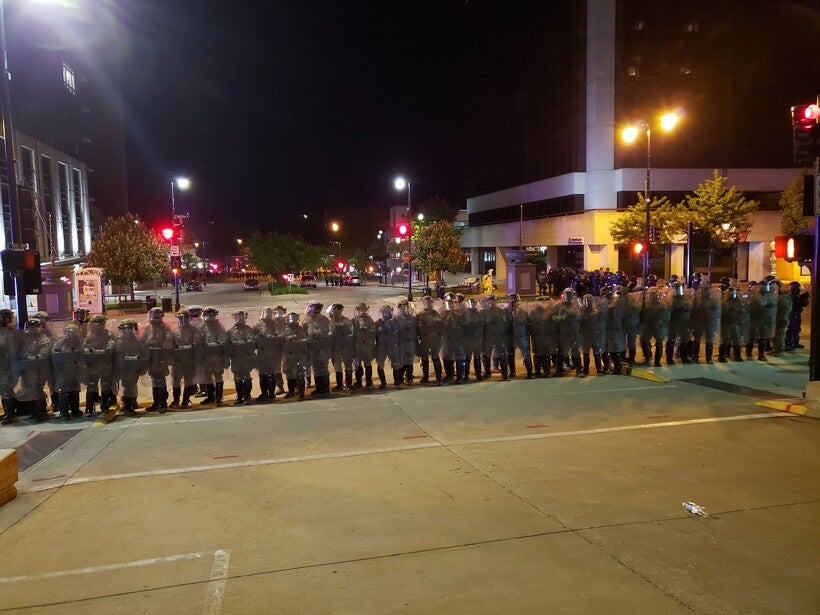 A handful of people were seen breaking glass on a building and cars. 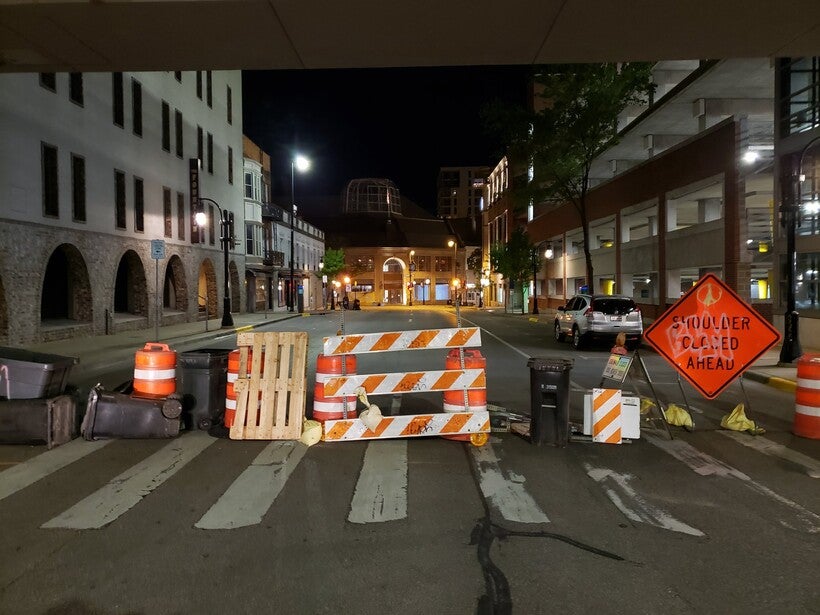 An improvised barrier on the street in Madison's downtown. Shawn Johnson/WPR

The large police line moved slowly to disperse the crowds. Small groups of protesters keep scattering and moving on to the next block.

Gov. Tony Evers' office announced Sunday he had authorized the National Guard "to support the Madison community's response to agitators that have disrupted peaceful protests following the murder of George Floyd by a Minneapolis police officer."

Miles away from the protests in Madison's downtown, Sun Prairie police said they arrested two people in connection with looting of a Target store Sunday night.

According to a police news release, officers responded at around 10:43 p.m. to the store, located at 660 S. Grand Ave., after receiving a report that 10 to 12 vehicles were in the store's parking lot and looting was occurring.

When officers arrived, they said there were approximately two to three vehicles in the lot that were driving away. Police said one of those vehicles struck an officer’s squad car as he was arriving, but the officer wasn't hurt.

Officers pursued the vehicle and during the pursuit, the vehicle was spiked by a DeForest police officer near the northbound onramp at Interstate 94 at Highway 51, according to police.

A 40-year-old man and 35-year-old woman were arrested and Target merchandise was recovered. 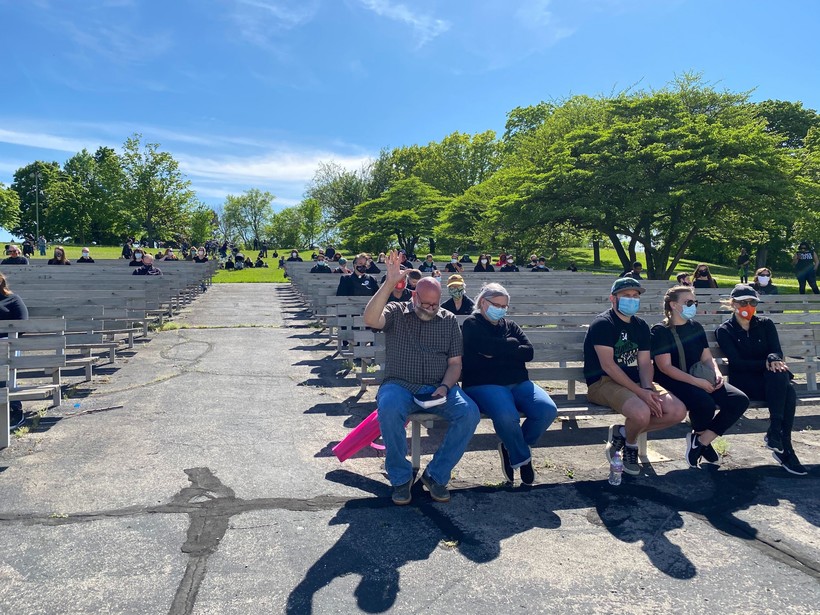 Around 300 people gathered to pray on behalf of George Floyd on Sunday, May 31 in Milwaukee's Washington Park. Corrine Hess/WPR

Earlier in the day, demonstrators gathered for a third day Sunday in Milwaukee — this time in prayer.

About 300 people attended the Salt + Light Peaceful Prayer Protest at Washington Park on the city's west side, where they prayed, sang and talked about Floyd and the other African Americans who have died.

Speakers kept the messages positive and asked attendees not to continue the violence that had previously taken place in Milwaukee, Madison and across the country. 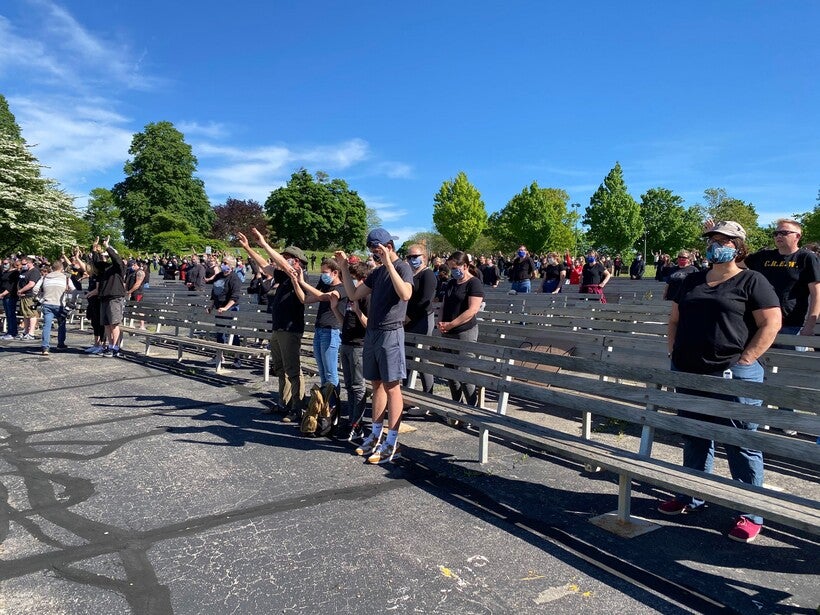 People pray during the peace protest in Washington Park on Milwaukee's west side on Sunday afternoon. Corrinne Hess/WPR

The Rev. Peter Patrick said protesters have used the demonstrations to point out all of the ways they have been disregarded as people of color.

"We are one, we are all human beings, no matter what we look like. And we can't be defined by the color of our skin," Patrick said. "This is a call for each and every one of us that we need to see beyond our color."

Heather Winter attended the prayer protest with her 7-year-old daughter, Chenta. Winter's father is a retired sheriff's deputy. She said she hopes he did the right things during his career. Woman holds a sign with the names of African Americans killed by police. Corrinne Hess/WPR

"I don't know, they are in a difficult position, but I don't think in my job, I would react when someone makes me angry — it's not my instinct to attack them," Winter said. "I think it's sad that it has come to this, but I don't think that we're acknowledging that losing George is one part of the problem, but these economic differences are so massive that this is also looters are probably people who probably had no pay or no support."

Protests Held In Milwaukee, Madison During Past 2 Days

Milwaukee protesters demonstrated peacefully during the day Friday and Saturday. Both nights ended with property damage in numerous parts of the city. There were a total of 60 people arrested and about 35 businesses looted or vandalized, according to Milwaukee Police Chief Alfonso Morales.

In Madison, after an afternoon of peaceful protests, demonstrators clashed with police and destroyed property on Saturday night and early Sunday morning. Madison police said on Sunday that they had arrested three people and reported that 75 businesses were damaged or destroyed.

Milwaukee Mayor Tom Barrett imposed a 9 p.m. curfew for Milwaukee on Saturday and extended it Sunday.

"I know that there is a dire need for improvement of police/community relations," Barrett said during a press conference Sunday. "I know there is a dire need of addressing the economic challenges that result from generations of poverty, of racism and other issues that we as a nation have to face. What we saw Friday and what we saw Saturday was a vast, vast amount of people peacefully, peacefully, showing their frustration. That is America."

Madison Mayor Satya Rhodes-Conway also imposed a 9:30 p.m. curfew in the city's downtown for Sunday night. In an address Sunday morning, she implored people to center their anger on racism and injustice.

"If you are angry because you want those who broke windows and trashed sidewalk cafes ... to face consequences, be more angry that the people who kill black people all too often walk free," Rhodes-Conway said.