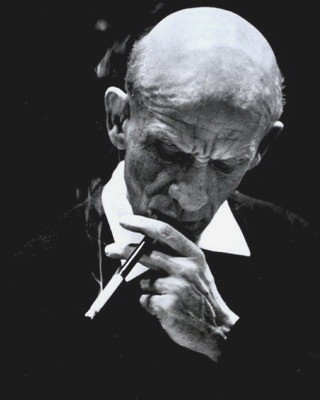 Dimitri Mitropoulos had conducted the Minneapolis Symphony in 1937 in a concert that had turned the usually staid audience into “an excited mob.” Now he was back as its music director and everyone was wondering if the magic would hold.

A Minneapolis reviewer had described Mitropoulos’ conducting as “punching the air barehanded” and “a weird repertoire of frenzied gestures and scowls and grimaces that registered every emotion from terror to ecstasy.”

The reviewer went on to say that the resulting music was full of “great thought and abiding spirit” and the audience agreed. Just days after Mitropoulos’ guest appearance in Minneapolis, the orchestra’s directors announced that they had hired him as music director for the following season.

Upon his return, he got down to business right away, and the musicians could tell at once that he was different from the stern autocrats many of them were used to. He arrived for rehearsals on time, conducted from memory, and eschewed the use of a baton as if to put himself on a level with the players, whose names he had memorized before the first rehearsal. He also seemed to downplay his importance in leading the orchestra, saying, in effect, to one player or another, “You’re more important than I am at this spot, so you set the pace.”

“Look,” he was quoted as saying, “I am not ‘the boss’ here. We are working together.”

The first concert took place after four days of rehearsals, on January 7, 1938, in Northrop Auditorium, and consisted of three classical works–Haydn’s London Symphony, Mozart’s Symphony No. 39, and Beethoven’s First Symphony–three works that were pleasing but not known for bringing down the house. And yet, Mitropoulos and his orchestra put so much clarity, passion and power into them that at the end of the concert the audience of five thousand stood and cheered.

It was an auspicious beginning, and Dimitri Mitropoulos’ year with the Minneapolis Symphony turned into twelve.