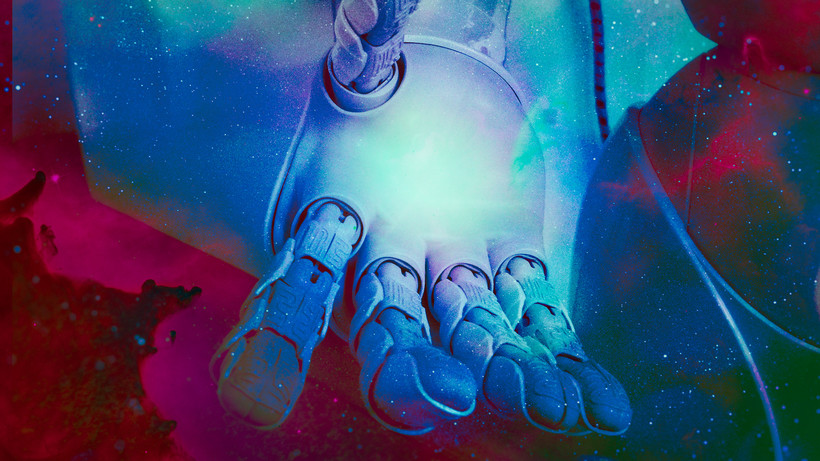 Futurist Amy Webb Tells Us We Can Have A Utopian Future — If We Are Vigilant
By Angelo Bautista
Share:

Amy Webb is hopeful for a better future driven by technology. But we need to be paying closer attention to who's doing the driving, and if we're happy with where we're going and how we get there.

Webb is a futurist and author of "The Big Nine: How Tech Titans & Their Thinking Machines Could Warp Humanity." She warns the harrowing future of artificial intelligence could take many forms, even as a refrigerator.

"To me, it seems entirely plausible that I could get to my Amazon connected refrigerator, decide that I want to drink a beer because I've had a long day of work or have some cheese curds, whatever it might be. And the refrigerator won't open up because it knows that I've hit my caloric intake for the day."

As Webb told Anne Strainchamps of "To The Best Of Our Knowledge," although artificial intelligence has been around for many years, the big players of AI are just getting started in transforming our futures, for better or for worse.

Anne Strainchamps: Every time I go on Amazon or Netflix, they somehow miraculously know what I might like to watch or I might like to buy. And we get it, that that's because we're being watched and tracked all the time. But it's worth it to us because it makes life easier. Can you play out where that slippery slope is headed?

Amy Webb: So Wal-Mart has filed a patent for a new kind of shopping cart. The first time a customer places their hands on it, it creates a baseline. It's looking for your temperature, your heart rate, and other biometric indicators. As you move throughout the store, the shopping cart is constantly surveilling you to see if you are feeling stressed out — your shopping cart is collecting your data. If this entire system decides that you're stressed out because you can't find potato chips or whatever it is that you're looking for, it will tell a store associate who will come over and find you.

I mean, it sounds very creepy, but from a retailer's point of view, all they're really trying to do is to anticipate our future needs and to solve problems for us before they arise.

Now in practical terms, let's say that we're in Wal-Mart pushing that shopping cart around and I'm starting to feel really frustrated. It may have nothing at all to do with my store experience — maybe I've just seen an email from a co-worker and it's upset me, or maybe I've seen something on a shelf that makes me sad because it reminds me of a loved one that I've lost.

The challenge is that AI is still fairly rigid, and there's a small group of people with a limited worldview making these systems and tools and decisions that don't take into account the capricious nature of humans, and how we think and go about our daily activities.

AS: Some people were kind of shocked to read recently that China is using DNA and other digital data to track ethnic minority populations. But reading your book, I discovered that's the tip of the iceberg, right?

AW: So there are nine companies that control the future of artificial intelligence. Six are in the United States, three are in China.

The six that are in the United States, I like to call the "G-MAFIA." That's Google, Microsoft, Amazon, Facebook, IBM, and Apple. In China, they're called the "BAT" — Baidu, Alibaba, and Tencent.

In the United States, the G-MAFIA operate under very little scrutiny and regulation outside of normal business practices. These companies are working on commercializing AI. That is not the case in China. In China, the BAT are technically independent companies, but because it's China, they very much operate under the thumb of Beijing. That has allowed China to build out AI in service of many of its other social programs and big national strategies.

One that I'm sure people are familiar with is called the "social credit score." Citizens in China now get awarded points or demoted points depending on certain behaviors. If you perform meritorious work — like a good deed — and a neighbor or a co-worker reports you, points might be awarded.

AS: I can get points for shoveling my neighbor's sidewalk?

AW: If they report it, yes. However, if you jaywalk in some of the southern provinces right now, that is an infraction.

Smart cameras are on the street. They recognize who you are. Your face is put on a digital billboard and you are publicly shamed. That information is likely sent to your employer. It's also sent to your neighbors and your relatives. And all of that is computed in real time where a score is levied not unlike our credit scoring financial system in the U.S.

And it has real-world ramifications. In the past year or so, 17 million Chinese people were prevented from buying airplane tickets. They didn't qualify because their scores were too low.

AS: You jaywalk too often and you're not allowed to buy airplane tickets!?

AW: Well I think it was probably more than just that. But 17 million people!

There are 5.5 million people who were not able to buy train tickets.

Three-hundred-thousand people qualified for job promotions, but because their social credit scores were lower, they weren't able to move up.

Now you could be saying to yourself "well that sounds terrifying. Luckily for me, I don't live in China, therefore none of this has anything to do with me." I would argue that the opposite is true. I believe that the world is being reshaped at this moment in time.

China sees artificial intelligence as a route to creating a new world order. One in which the United States and our allies become effectively locked out of doing business with these countries that are aligned with China. Our democratic ideals which, I happen to believe very strongly in, we could start seeing restricted or tampered with in new ways.

That's pretty scary as it is, and we haven't even talked about new ways to turn some of this technology against us — to start hacking us in new ways.

We have a lot to be concerned about and I think it's incumbent on each person individually to learn more about what AI really is, and what it's not. To enjoy sci-fi, but to think very pragmatically about the decisions that we're making and how those decisions could have broader implications in the future.

AS: How much hope do you have for the future?

AW: I actually have quite a bit of hope for the future. I do not believe that these "big nine" companies are the villains. I believe that if they change some of the developmental track — they make some decisions and some tweaks — that they are the heroes of this story, heroes of our future that can play a positive role. I believe that all of the promises that we've made about AI, promises that paint a picture of healthier lives and better opportunity, I believe those are possible.

But our best futures never show up fully formed and they don't happen automatically. It's up to us to choose the path that we want to take. And I'm hopeful because the future hasn't happened yet, that we're going to make stronger, better decisions right now so that we can achieve that preferred future.

AW: And I completely disagree with that. I've seen a tremendous amount of research in green tech that ranges from different types of geoengineering to terraforming in new ways. And there's a ton of opportunity.

The individual actions that each one of us can take, I think, have to do with communication. At the moment, there's a lot of individual protests where people have decided they're not going to use straws anymore and somehow that's going to make a dent.

What would make a much bigger dent: if consumers have more meaningful conversations with their elected officials, and those elected officials are willing to look at actual science and evidence to make smarter decisions. We all have a role to play. We can all make a dent in climate change, but we have to be more creative and sophisticated in our thinking.

Similarly, with artificial intelligence, all of us have a stake in what's coming and all of us can play a role in making ourselves a better future.

But I will tell you what gives me hope. What gives me hope is that we are not robots living out somebody else's legacy source code somewhere. Which means that we all have agency, and even when I see dire consequences and catastrophic scenarios ahead, I know that we still have an opportunity to make different decisions. And I am full of hope.

Hope is what gets me through my day. It really does. And I'm always hopeful and I have confidence in that hope that people will choose a better path. They just have to be armed with the right information and they have to feel a sense of urgency.