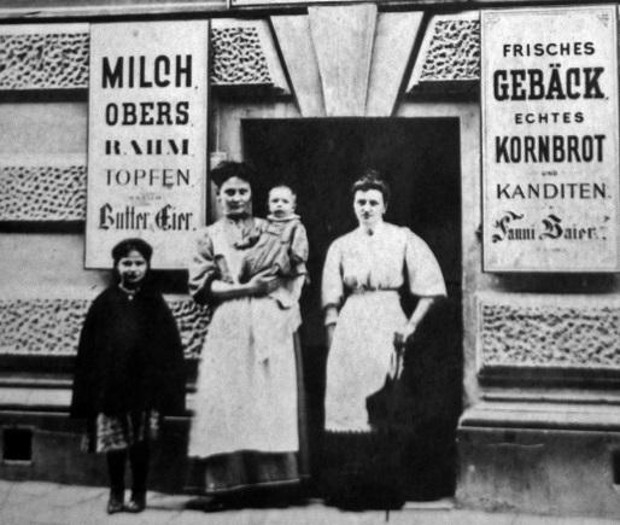 A photo of Fanni in front of her milk store in Vienna. Photo courtesy of author Genevieve Davis.

Treats Both Fancy, Frugal Came Out Of Fanni’s Kitchen
By Judith Siers-Poisson
Share:

In the book, Davis tells a very personal story while sharing a family history that encompasses life during wartime, immigration and keeping a family healthy and happy despite hardships. According to Davis, the book was a work in progress for more than a decade. She said that collecting recipes posed a large challenge because Fanni cooked “by feel,” so every dish that came directly from her had to be constructed through much trial and error.

Also, while some of Davis’s relatives in Austria had some of the recipes she wanted for the book, all of them were written using metric weight — meaning Davis, her mother and sister had to meticulously work out the conversions to volumetric measurements.

Davis said that Fanni owned a milk store in Vienna before coming to the U.S., and that one of the products she's sure was made and sold there was topfen — often called “quark” in English. Davis described topfen as a sweetened, cultured milk cheese.

Davis said that she made it herself by “clabbering” buttermilk. Here's how she described the process in the book:

The cheese is soft, Davis said, and is mixed with sweetened whipped cream. It can then be used to top a variety of Austrian desserts, including the Strawberry Cake recipe in the book, which was written by Davis's cousin Renate in Vienna.

Another recipe that Davis includes in the book is for plum dumplings. She said that depending on what’s in season, they can be made with other fruits, like raspberries and blueberries.

While all of Fanni’s dishes are delicious, some were designed to stretch a tight food budget. Davis said that Fanni’s crepes were one of those recipes, since they took advantage of the food subsidies that their boarder, “Uncle” Hermann, was entitled to. She said he would bring flour and other commodities home in a little red wagon.

“These are crepes that she made for me, but she kept her family fed during the Depression with a lunch that was just a little bit of flour, and milk, and egg. That was the ‘omletten,’” said Davis.

Ultimately, Davis said she considers herself lucky to have had the privilege to spend time with and know Fanni.

“She was a wonderful person. She was just the best person you’d ever want to meet. Her outlook was so cheerful — so simple, and yet so beautiful at the same time,” said Davis.