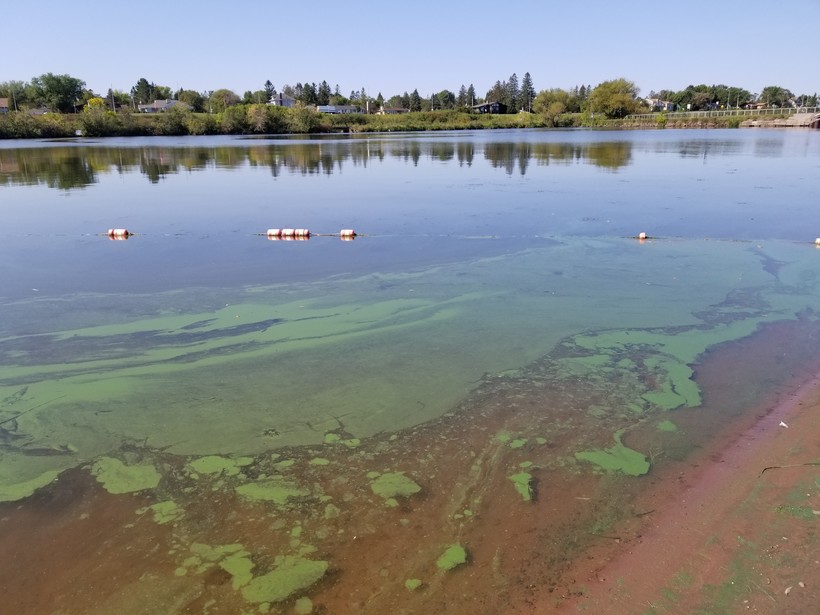 For The First Time, Toxins Found In Blue-Green Algae Bloom In Inlet Of Lake Superior

For the first time, toxic blue-green algae has been found in Lake Superior waters as part of a recent bloom that formed at a beach in the Duluth-Superior harbor. But officials caution the discovery of toxins in a relatively shallow and protected inlet of the lake doesn't mean harmful blooms are likely to form in the lake's open waters.

The Wisconsin State Lab of Hygiene analyzed a sample taken from a bloom at the Barker's Island beach area in Superior on Sept. 10 to identify species of blue-green algae that were present and four types of toxins. The bloom contained three species of algae, one of which produced a toxin at levels considered unsafe for swimming.

The discovery is a concerning progression in blooms that have been observed on Lake Superior, according to Robert Sterner, director of the Large Lakes Observatory at the University of Minnesota in Duluth.

"We can no longer say that we haven't seen any toxins in any of these in the lake or connected waters because now we have," said Sterner.

Blue-green algae often looks like pea soup or spilled paint as it collects near the shore. The scum can produce toxins that can make people or animals sick.

The first documented blue-green algae bloom on Lake Superior formed in 2012 after massive flooding in the region, followed by another large bloom in 2018. Half a dozen minor blooms were reported across the lake this year.

"I don't want folks to think that this happened here and the entire lake is doomed. I absolutely do not think that's the case," said Gina LaLiberte, harmful algal blooms coordinator for the Wisconsin Department of Natural Resources. "I think it's important to recognize that even though it's Lake Superior — even though we think of it as a really clean, pristine lake — there can be blooms that happen."

Lab results for three other toxins showed levels of saxitoxin at the lowest concentrations that can be measured. Tests showed no detection of cylindrospermopsin or anatoxin-a — a potent neurotoxin that can kill dogs within minutes to hours depending on the level of exposure.

The Barker's Island bloom contained the blue-green algae species Microcystis aeruginosa, Aphanizomenon flos-aquae, and Dolichospermum lemmermannii — the last of which is the type observed in other blooms on Lake Superior. The other two species haven't been previously detected in blooms on the lake, but they're commonly found in blooms on inland waters.

While the bloom technically occurred in Lake Superior waters, LaLiberte stressed it formed in a protected area facing the mainland behind Barker's Island and under conditions different from those in the open lake. The beach is in an area with shallower water and nutrient levels may be higher because it's close to development and part of the St. Louis River estuary.

"It would really be a mistake to conflate what happened at this beach in this very protected area with the blooms that we've been seeing in the open waters," said LaLiberte.

Sterner agreed with LaLiberte that it wouldn't be appropriate to use the findings as an indicator of what lies ahead for Lake Superior as whole.

"It is important to make a distinction between where this bloom was observed and the boundaries of Lake Superior along with the Lake Superior shoreline," said Sterner. "The harbor has higher nutrients, warmer, slower water. There's a lot going on in the harbor that isn't necessarily reflective of the main lake."

Researchers are keeping a close eye on blooms as climate change drives temperatures higher, warms lakes and causes more extreme weather events that set the stage for harmful algal blooms. The changes are likely to cause blooms to form more often on the world's largest expanse of freshwater, which is one of the fastest-warming lakes across the globe.

"The conditions are going in the wrong direction. That doesn't mean Lake Superior is going to turn into Lake Erie next year," said Sterner. "But this is not the direction we want to see this place head."

Harmful algal blooms on Lake Erie have threatened fish and drinking water, including in 2014 when toxins affected the drinking water of 400,000 residents in Toledo.

City officials in Superior closed the Barker's Island beach on Sept. 10 after discovery of the bloom, which dispersed quickly. State officials and researchers say the findings serve as a reminder for people to be wary of blooms and underscores the need for further research to determine what’s happening within the system.