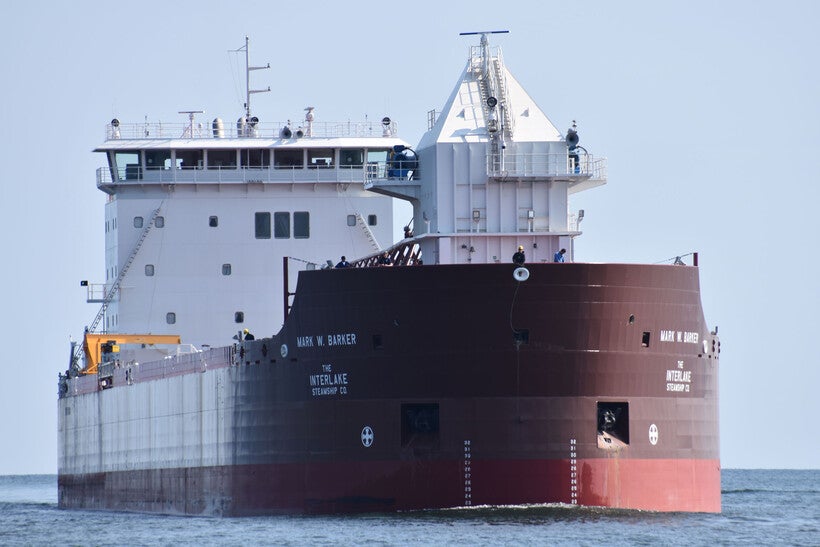 The Mark W. Barker arrives in the Twin Ports on Tuesday, Sept. 6, 2022. The vessel is the first U.S.-flagged freighter built on the Great Lakes in nearly 40 years. Danielle Kaeding/WPR

The newest U.S.-flagged freighter on the Great Lakes glided into the Twin Ports on Tuesday. The Mark W. Barker is the first such vessel built on the lakes in almost 40 years.

The ship is owned by Ohio-based Interlake Steamship Company and named after its president of the same name. Built by Fincantieri Bay Shipbuilding, the freighter left Sturgeon Bay on July 27. The ship was built to move salt from the Great Lakes region for Cargill Inc., and the company christened the vessel in Cleveland, Ohio, on Thursday.

The Mark W. Barker is the first ship built to operate on the Great Lakes since 1983, and it is the first built by Interlake Steamship since 1981. The company said it’s invested more than $100 million to modernize its fleet to transport around 20 million tons of cargo, including iron ore, coal and salt. 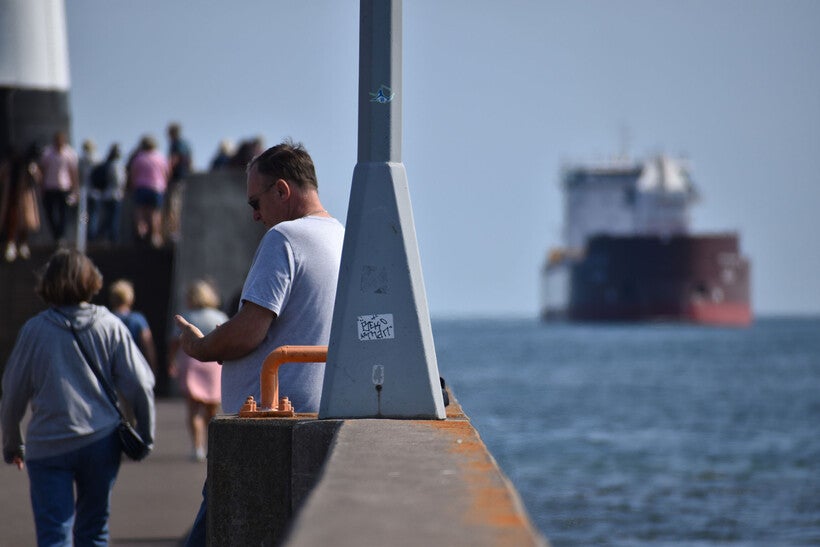 People gather to watch as the Mark W. Barker arrives in the Twin Ports on Tuesday, Sept. 6, 2022. The vessel is the first U.S.-flagged freighter built on the Great Lakes in nearly 40 years.
Danielle Kaeding/WPR

The vessel is a bit shorter than the 1,000-foot freighters on the Great Lakes, measuring 639 feet in length and 78 feet wide.

"It gives it better ability to be able to navigate through some of the smaller rivers, for instance, the Cuyahoga River in Ohio, and through some of the tighter turning docks and terminals that we'll encounter across the Great Lakes," said Jayson Hron, spokesperson for the Duluth Seaway Port Authority. "That versatility that this ship has is one of its definite benefits, and that versatility extends to its ability to carry different types of cargoes."

Construction of the ship began in 2019, and it’s designed to carry an average of 25,000 tons per trip of both bulk and break bulk cargo on the Great Lakes. Bulk cargoes refer to cargo like iron, limestone, or coal that is poured into a ship’s cargo hold, whereas break bulk cargoes may include oversized items like wind turbine components that are removed by cranes. 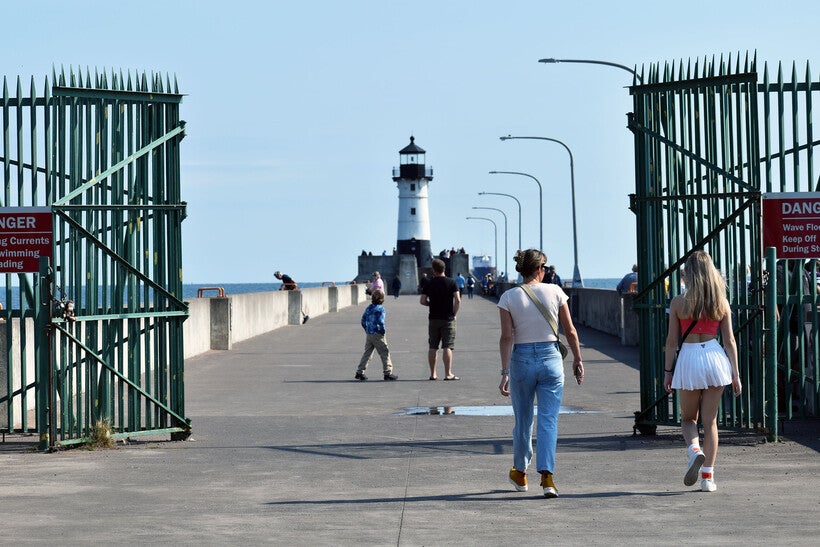 People gather in Duluth's Canal Park to watch as boats arrives to load and unload cargo at the Port of Duluth-Superior on Tuesday, Sept. 6, 2022.
Danielle Kaeding/WPR

The Mark W. Barker has a flat, rectangular bottom rather than the traditional V-shaped cargo holds of most Great Lakes freighters. That increases its ability to carry diverse cargoes, according to Brendan O’Connor, vice president of marketing and marine traffic for Interlake Steamship Company.

"We've had a number of customers approach us and asked us to look at things that could relate to wind turbine or windmill structures, or larger pieces of heavy equipment, or bridge girders," said O’Connor.

The ship also has five 80-foot-long MacGregor hatches, which are more commonly found on ocean-going ships. Those hatches can provide easier loading at facilities across the Great Lakes, as well as handling of specialty cargoes. Those cargoes could include containers. Currently, only the Duluth-Superior port and Port of Toledo are capable of handling container cargo on the U.S. side of the Great Lakes.

"We didn't have a capability of doing that prior to the Mark Barker being built," O’Connor said. 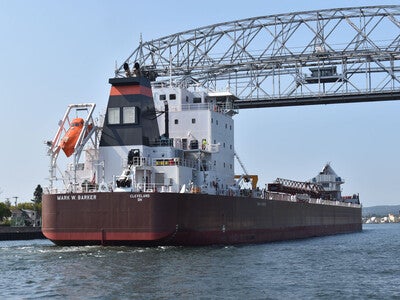 It’s also the first ship on the Great Lakes that meets the U.S. Environmental Protection Agency’s Tier 4 emissions standards. Those standards are intended to cut emissions of diesel particulate matter and nitrogen oxide from marine diesel engines through treatment technology known as a diesel exhaust fluid system. That helps reduce harmful nitrogen oxide emissions that can contribute to ozone pollution.

"It’s a great ship not only for being able to move cargoes throughout the Great Lakes and supply our raw materials of everyday life, but also do so in an environmentally efficient way," said Hron.

The Mark W. Barker was built from steel manufactured in Indiana that was sourced from iron ore mined on Minnesota’s Iron Range.

The vessel entered the Duluth-Superior harbor with about 22,000 tons of salt that’s being unloaded in Superior. The ship will then be loaded with iron ore that’s bound for Cleveland.