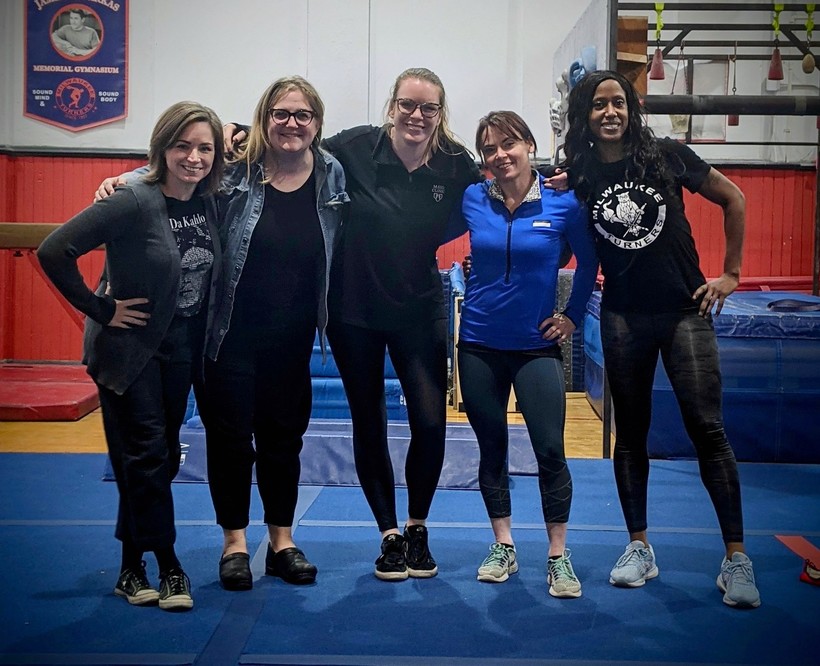 When Amber Tucker went through a traumatic event, she didn't fight.

That was her automatic response, but she said it wasn’t the one she wanted. She was "very upset" with herself.

But through martial arts, she said she's been able to restore a sense of control over her body.

"It's the fight, flight or freeze response that's automatically hardwired into our brain for survival," she said during a recent segment on WPR's "The Morning Show." "I was able to rewire that response, so now my trauma response is fight not freeze."

Tucker is part of a Milwaukee pilot research program called Restorative Justice in Movement. She is an associate professor of sociology at Cardinal Stritch University. Marquette University is also part of the research team.

The program includes clinics on jiujitsu, rock climbing and powerlifting, Tucker said. The researchers, who participate in these programs themselves, want to offer a new way of thinking about the mind-body connection — they want to use movement to help handle trauma.

Tucker was a single mother who felt the effects of the criminal justice system on her loved ones, Milwaukee Neighborhood News Service reported. The program aims to bring in women of color who have been incarcerated themselves or affected by having loved ones who are incarcerated.

Funding for this research comes from the Marquette's Institute for Women's Leadership and the President's Challenge for Racial Justice and Equity Response.

Restorative Justice in Movement has also partnered with the Milwaukee Turners as the program tries to "promote gender equity, community empowerment, and collective healing from trauma," according to a Marquette announcement.

Tucker said there is "emerging" research on how martial arts can help trauma. She also mentioned new research on having combat veterans with PTSD try jiujitsu.

"The idea is restoring the connection between the mind and body that is often lost in the experience of trauma," she said. "That is one of the disempowering aspects — that you lose a sense of control over that moment and over yourself."

Jiujitsu specifically helps Tucker because she said it's an "intellectual sport." Some might look at this program and think they're not athletic enough for sports, but jiujitsu is about anticipating responses.

Those skills can transfer to high-stress situations in real life, she said. Jiujitsu gives her the confidence to trust her body again — trust that her body will follow what her mind wants it to do.

"Over time, you learn to slow down and actually think rather than responding out of fear or a loss of a sense of control or safety," she said.

Additionally, she said jiujitsu includes fighting on your back, a metaphor suggesting that being down doesn't mean the fight has to be over. It’s empowering, and she said children who learn the right technique can overpower adults in these clinics.

These physical acts are reframing how people can think of sports. Tucker said sports typically have masculine connotations, but what does it really mean to be "strong?"

In powerlifting, for example, Tucker said some of the strongest women in the world don't fit the traditional look of "strong."

The range of activity that can address trauma includes much more beyond what’s in this program.

One caller into the segment on "The Morning Show" said she was 70 years old and struggled with arthritis. She said she practices tai chi, which helps her mental strength and balance.

Another caller said she has trouble talking to her mom, who has been through trauma, about adding more movement to her life. Tucker said mindfulness, meditation and yoga are other ways to recover from trauma.

Yoga, Tucker said, is a "gentle" way to still work on one’s body. She said she started watching yoga videos on YouTube during the pandemic until she reached a point where she could go to actual classes.

Tucker said trauma survivors sometimes "just live with it." That made her wonder: What more can be done to support the families or friends of survivors to further along the healing process for their loved ones?

"(Trauma) impacted the way that I mother," she said. "It took me 30 plus years to even acknowledge the fact that I was dealing and coping with trauma before I started to do something about it."

The powerlifting clinic the researchers ran last summer was intergenerational, working with women and their children.

At one point, they were trying a deadlift. When a daughter tried, Tucker said her mother was like a cheerleader, encouraging her daughter and saying. "You can do this!"

But when it was the mother’s turn, she froze. Tucker remembered her sheepishly saying, "I don’t know if I could do this."

The rest of the program — and the woman’s daughter — tried offering her the same encouragement she was giving out earlier.

The mother unfroze, and she fought.

"She did it, and it was beautiful. We all just stopped and clapped and cheered," Tucker said. "There was a mirror. She looked at herself and she said, ‘I did it. I did it.’"