Democrats Would Need To Flip Two Districts To Take Control Of The Senate
By Shawn Johnson, Patty Murray and Ximena Conde
Share:

Wisconsin's next governor will set the agenda for state government, but how much he's able to accomplish will depend in large part on who controls the Legislature.

Republicans currently control both houses in the state Capitol, but Democrats would need to flip just two seats to win control of the state Senate.

That's put a spotlight on a handful of competitive senate races around Wisconsin.

Here are a few of them.

Wisconsin's 17th Senate District includes parts of nine counties in southwest Wisconsin, but even people who don’t live there might have been hearing about the candidates on TV ads.

Money has flowed into this race, from both outside groups and the candidates.

State Sen. Howard Marklein, R-Spring Green, has been a prolific fundraiser, spending more than $815,000 on his race this year alone. 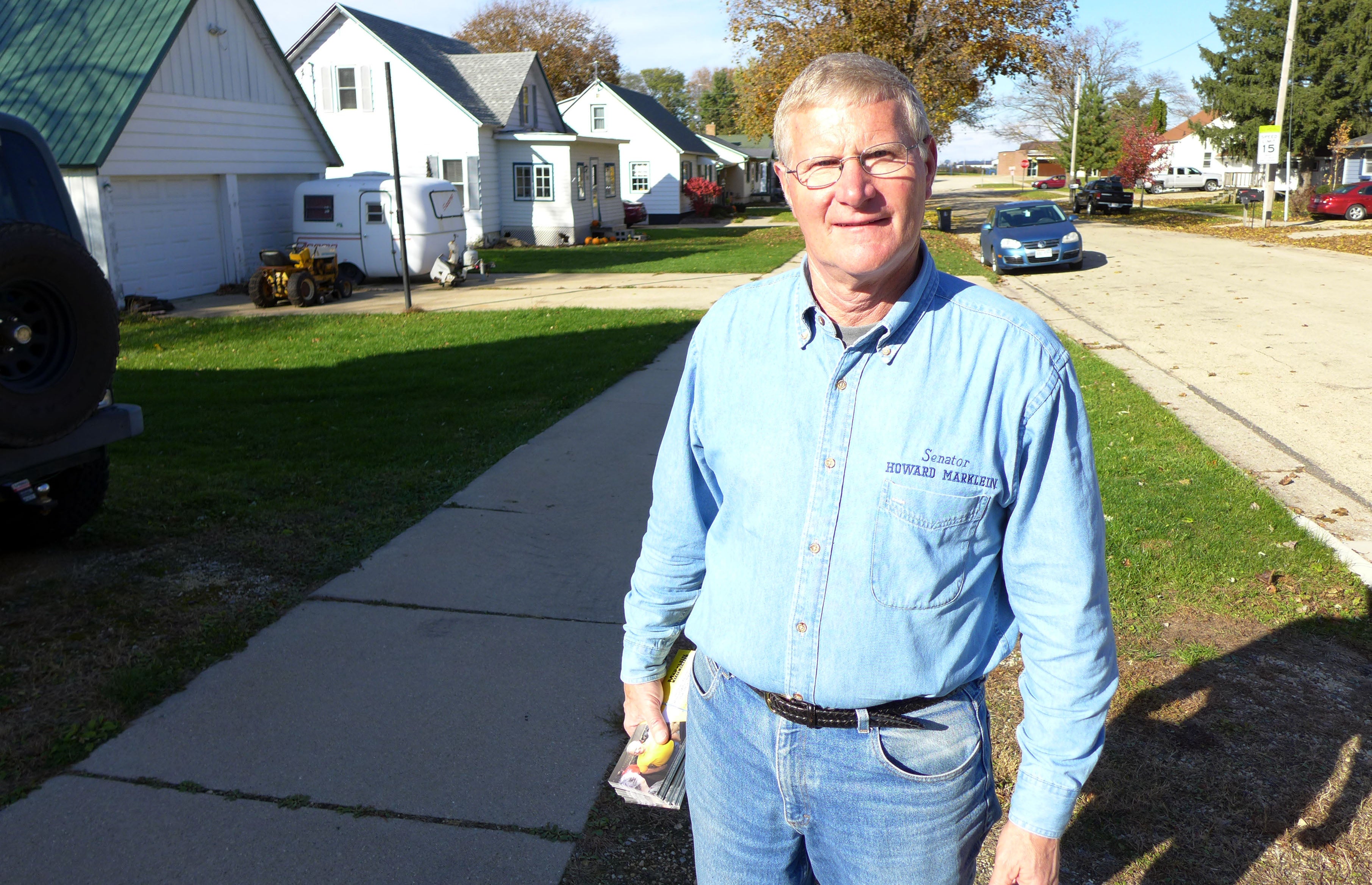 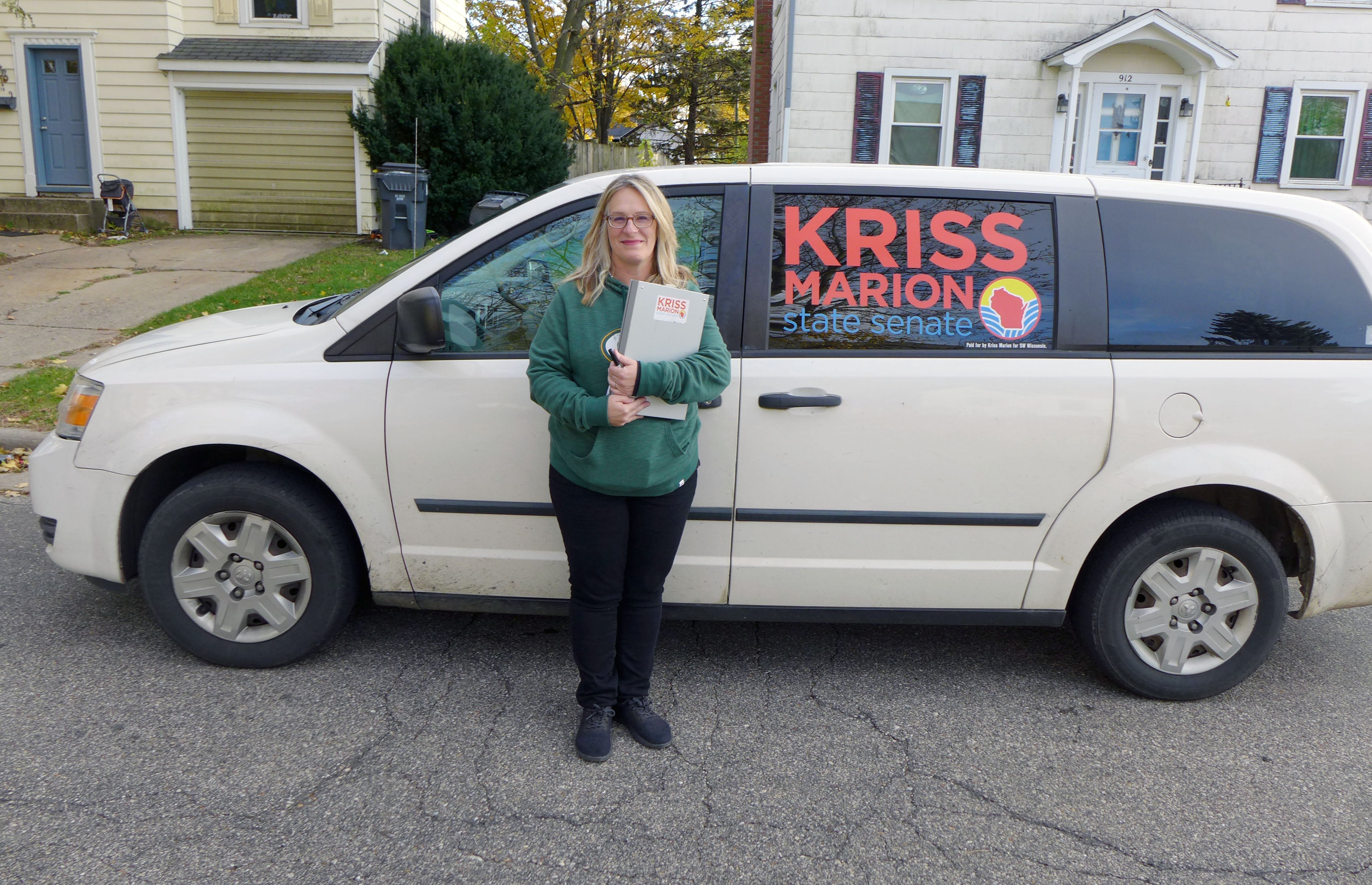 Marklein's pitch to voters is also about money.

"They may not agree with me on every issue, but they know I'm watching the checkbook," Marklein said during a break from knocking on doors in Monroe this week.

Marklein was first elected to the Senate in 2014. He served four years in the state Assembly before that.

Marklein is a certified public accountant and a member of the Legislature's budget committee, where he helped identify more than a billion dollars in financial reserves at the University of Wisconsin System. The Legislature has frozen tuition for in-state students every year since.

"I can tell you that every student at (University of Wisconsin)-Platteville today is saving $2,500 because of the work that I did finding those cash balances back in 2013. We haven't had a tuition increase since that time," Marklein said.

Marklein says he'd like to spend more on rural roads, and that when it comes to road funding, "everything is on the table," including possibly raising the gas tax.

He voted to increase funding for schools last year but won't promise it again until he sees what the rest of the budget looks like next year.

Marion got to know state politics when she pushed for a law and then a lawsuit to allow for the sale of home-baked goods in Wisconsin.

As she went door-to-door meeting with Monroe voters, Marion blamed Marklein for the poor state of the roads.

"He's been in for eight years," Marion told one voter. "Four budgets. He's on the Joint Finance Committee and the Transportation Committee, and I hold him responsible for these roads."

Marion says Marklein hurt schools when he cut to education funding in earlier budgets. She also faults him for supporting Wisconsin's Foxconn bill.

"I mean you can't knock on a door or sit next to someone at a bar or even stop to fill gas up in a van that says 'Kriss Marion' on it without somebody talking to you about Foxconn," Marion said. "It's incredibly unpopular out here."

Marion realizes a race like hers could decide the Senate.

"I think having a balanced Wisconsin Legislature would go a long way toward creating a lot more reasonable discussion about many, many things," she said. The race for the 19th Senate District could affect control of state government, but a local issue has been front and center here.

The Fox Valley district is in paper making country, or at least it used to be. Several mills have closed and consumer products company Kimberly Clark has said it may shut down its Cold Spring plant that employs about 500 people.

State Sen. Roger Roth, R-Appleton, sponsored a bill that would offer more than $100 million in state tax credits to the company to keep it open. Roth says that the entire region would benefit. Lee Snodgrass. Courtesy of the candidate.

"If we're able to put this deal together, they're going to put a potential a half-billion-dollar investment in that facility moving forward," Roth said at a recent forum in the district. "It will be a boon for northeastern Wisconsin and every job up and down that supply chain."

But Roth's bill went nowhere in the Senate. His Democratic opponent, Lee Snodgrass of Appleton, blamed Roth for its failure, saying he should have involved both parties in finding a solution.

"Kimberly Clark is an amazing corporation," Snodgrass said. "Certainly we don't want to see them leave.  But it's difficult when we have a profitable corporation who we're offering incentives to."

Roth, the nephew of former Republican U.S. Rep. Toby Roth, said he'll try for a vote on the Kimberly Clark bill during an extraordinary session after the election.

Roth said it's important to get the Kimberly Clark deal right.

"They've been part of this community for 150 years and that's why it's so important that we do what we can to keep them here," Roth said.

Snodgrass says she worked in a mill while in college. She's now a director of communications for the Girl Scouts in parts of Wisconsin and Michigan.

She questioned why Roth didn't bring this bill up before the election.

"Right now that has just left people hanging," Snodgrass said. "That uncertainty has already led a number of people to leave that facility."

Roth won his first race in 2014 by almost 15 percentage points, but there are reasons Democrats are competing for the 19th.

President Donald Trump won the district by just 7 points, and Obama drew even in the area in his last election.

By most measures, Wisconsin's 5th Senate district in southeast Wisconsin is a Republican stronghold.

Mitt Romney and Gov. Scott Walker both won the district by double-digit margins, and most of the district rests in Waukesha County.

But the president's struggles with traditionally Republican suburban voters were evident in the district in 2016. At a recent forum between the candidates for this Senate seat, most of the discussion focused on state issues.

"Now not every school that takes vouchers is bad but the reality is that too many of them are," said Democrat Julie Henszey of Wauwatosa, answering a question about whether she supports the expansion of the state’s voucher program.

Rattling off schools she said took state checks and failed to educate students, Henszey said there's a lack of accountability with the voucher program and it shouldn't grow any more until those issues are dealt with.

Kooyenga is an Army reservist, and like Marklein, a CPA.

"I cannot, as a legislator, expand the voucher program by one student, not one, if that parent doesn’t decide to move that child," he said. "It’s parents that expand school choice, it’s not legislators."

Kooyenga and Henszey weighed in on other state issues at the forum, from student testing to Act 10 to road funding.

But there are also hints of the national political debate.

"Quality affordable health care is a right and we should have a health care system that meets our citizens’ needs without placing the burden on employers," said Henszey in support of universal health care as way for school districts and businesses to address the mounting costs of insurance.

Kooyenga warned against too much government involvement in health care.

"Universal health care is going to put nearly the entire population on Medicaid," he said. "We cannot afford that."

Kooyenga said the solution to rising health care costs is more flexibility with the Medicare program.

Henszey said while taxes would increase for people, universal health care would save people money in the long run.

The tone of national politics was also on the minds of voters at the forum.

Mary McNulty lives in Waukesha and plans to vote for Kooyenga because of his experience. She said she's disheartened by how divided the country has become.

"I’m scared about what’s happening that we want to throw everybody out for somebody new and I then think that we’re so much further off from getting ahead from where we are at this moment,” McNulty said.

Milwaukee resident Elena Calhoun plans to vote for Henszey. She said the election of President Trump made her more engaged.

"The day after the inauguration, I took a bus to Washington, I was at that women’s march, and I haven’t stopped since," she said, speaking about her canvassing efforts and visits to town halls.

For Calhoun, that's carried over into local races like the 5th Senate District, one of a handful that could decide control over the Senate for the next two years.

Part of the reason Democrats feel like they have a chance to win the Senate in November is that they won two special elections earlier this year in Republican districts.

But Democrats also find themselves playing defense in other districts whose boundaries were drawn by Republicans in 2011.

Sen. Caleb Frostman, D-Sturgeon Bay, defeated Rep. Andre Jacque, R-DePere in a June special election for the 1st Senate District in northeast Wisconsin, winning a seat that Trump carried by more than 17 percentage points. Frostman now faces a rematch against Jacque, only this time, there will be higher turnout for both parties.

Both parties are competing for the 31st Senate District, a seat that opened up when Sen. Kathleen Vinehout, D-Alma, announced she would run for governor. Former Democratic state Rep. Jeff Smith of Eau Claire is running against Republican Mel Pittman.