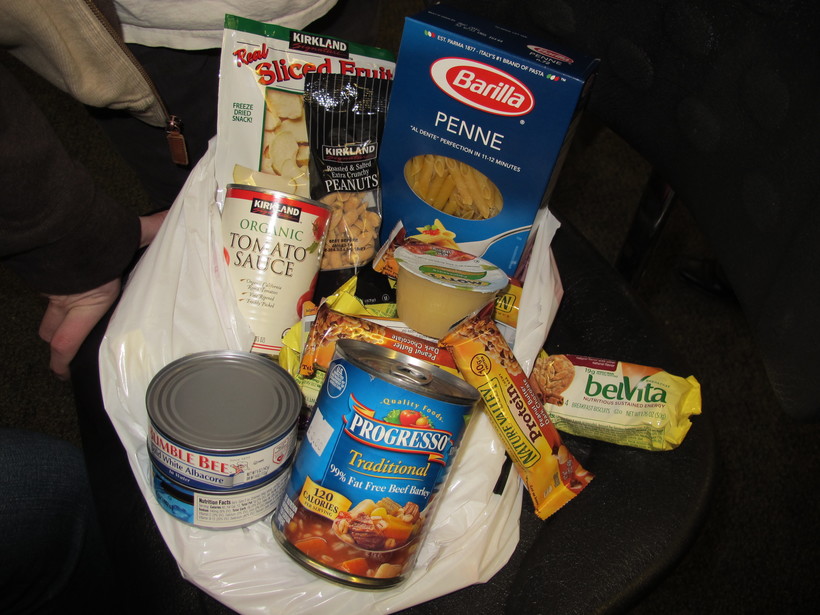 This photo taken on Tuesday, March 4, 2014, at Stony Brook University shows a collection of food that is given to guests at the college's recently opened food pantry. Officials say there are a growing number of food pantries opening on college campuses across the country to assist students contending with rising education costs. Frank Eltman/AP Photo

A federal report has found that students on college campuses across the nation are facing a wide range of food insecurity and that federal agencies could do a better job of helping students access food stamp benefits.

The Government Accountability Office report found that nearly 2 million students at two-year colleges and four-year universities were at-risk for food insecurity but did not report receiving benefits through the Supplemental Nutrition Assistant Program, or SNAP. While the GAO noted there is limited information about the national prevalence of food insecurity among college students, it reviewed studies that showed individual rates on campuses ranging from nine percent to "well over 50 percent."

"National data show that, over the past several decades, an increasing percentage of students from low-income households are enrolling in college," the report said.

Specifically the GAO found that the percentage of undergraduates from families at or below 130 percent of the federal poverty line increased from 28 percent in 1996 to 39 percent in 2016. Also, according to the report, the percentage of college students receiving the Pell Grant, which are awarded to students who display "exceptional need," has nearly doubled over the same timeframe.

Katharine Broton is an assistant professor at the University of Iowa who also works as a faculty member with the Hope Center for College, Community and Justice at Temple University. She said the findings in the GAO report are unsurprising.

"With this report the federal government has recognized something that we’ve been hearing from students and higher education practitioners in Wisconsin and across the nation for a long time, and that is that substantial shares of college students are struggling with food insecurity and hunger and it’s impeding their ability to complete their college education," Broton said.

One of the ways colleges and universities have responded to concerns about food insecurity among students is by creating campus food pantries. At the University of Wisconsin-Eau Claire, the Campus Harvest Food Pantry has been providing groceries and other goods to students since 2014. Founder Julie Carr said the demand for pantry services has increased significantly ever since.

She said the amount of food going to students has increased from around 150 pounds every two weeks in 2014 to more than 1,000 pounds every week in 2018.

"I think the cost of living is going up and I think peoples’ paychecks aren’t following suit," Carr said. "And education is getting more and more expensive year by year and students and families can’t afford it all."

Carr also pointed out that according to data collected from pantry visitors, most students using the service work, at least part time.

Food pantries have popped up on other Wisconsin campuses like UW-Stevens Point, UW-Green Bay and UW-La Crosse. A study by Temple University’s Hope Center found that nationwide there are at least 217 campus food pantries.