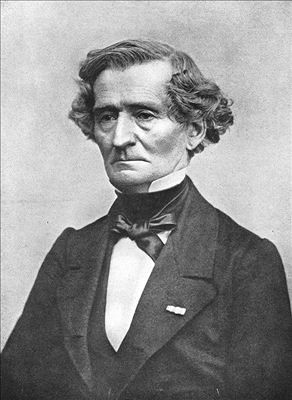 Love, politics, and music.  In April 1831 Hector Berlioz was in Florence, Italy, and he was disgusted with all three.  He wrote to a friend:

“You speak to me of music and of love!  What do you have in mind?  I don't get it.  Is there something on earth called music and love?  I thought I'd heard those doomed words in a dream.  You're condemned to misery if you believe in them.  As for me, I no longer believe in anything.

“I intended to travel to Calabria or Sicily and join some gang of bandits. That way at least I would have seen some magnificent crimes, thefts, assassinations, rapes and burnings instead of all these miserable little crimes, these acts of feeble treachery, which are a disease of the soul. Outrageous rabble!

“And they ramble about art, thought, and imagination, about fair-mindedness, about poetry--as if they had anything to do with that.

“What more can I tell you?  About Rome?  Well, nobody got killed.  Only the bold locals who wanted to slit all our throats and set fire to the Academy because we were supposedly in league with the revolutionaries to banish the Pope.  We had no such idea.  The Pope was absolutely safe from us.  [He looks like too good a man for anyone to want to overthrow him.]  Nonetheless we were all armed, and if the locals had come they'd have gotten a warm reception.

“What else?  Ah yes.  Here in Florence during my first visit I saw an opera about Romeo and Juliet by a little no-good named Bellini.  And Shakespeare's ghost didn't show up to eliminate the little upstart!  The dead don't come back.

“There was a wretched eunuch called Pacini who had written an opera called Vestal.  I had just enough strength left after Act One to escape.  I pinched myself on the way out to see if it was really true--and it was!”

Hector Berlioz, writing in the midst of political--and musical unrest--from Florence in April 1831.