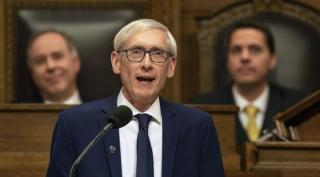 Gov. Tony Evers said he hopes he can convince GOP lawmakers to spend more money on the University of Wisconsin System before the state budget process is over.

The Legislature's budget committee voted 12-4 along party lines this week to increase state spending on the UW System by about $58 million, which is about $70 million less than Evers proposed.

Speaking on Wisconsin Public Radio Thursday, Evers said there was still time in the budget process to add additional funds.

"I'm hopeful to convince others as we move forward and before the final bill is actually voted on and sent to me that they'll put some more money in for the University of Wisconsin System," Evers said. "It's a driver of industry in the state, and if we want a good system, we have to have a good resource base for them."

Evers' comments were similar to those he made last week after Republicans unveiled a plan to increase K-12 education spending by $500 million, or about $900 million less than the governor asked for.

Evers said that it costs more to educate some children than it does others and that the budget committee had ignored that equity in what it passed so far.

"I know the people of Wisconsin feel strongly about this or I wouldn't be sitting in the governor's office right now," Evers said.

Republicans have noted that under their budget, the state would pick up 30 percent of all eligible special education costs, which is a benchmark Evers supported as state superintendent before he ran for governor. It's also the first increase in special education funding in the past decade.

But Evers said he wanted to convince lawmakers to spend more on special education than they did in the plan they passed in committee last week.