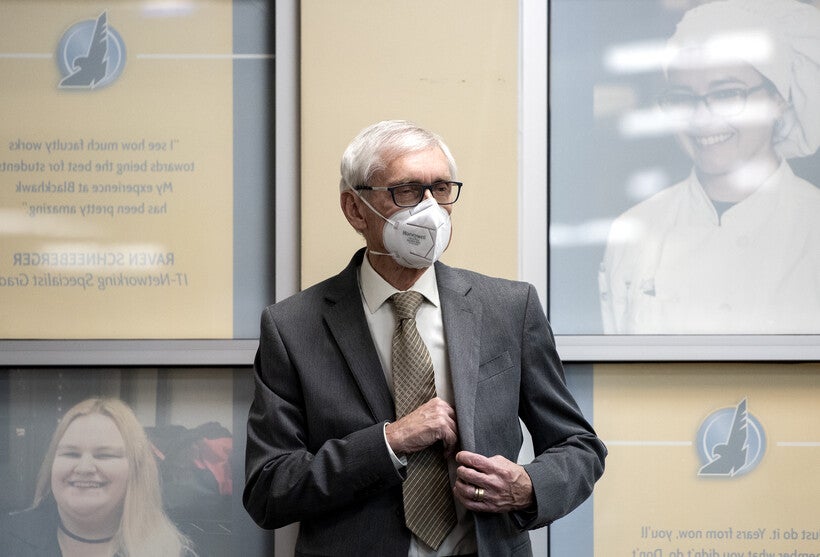 Gov. Tony Evers steps away from the lectern after speaking to reporters about a COVID-19 vaccination clinic Wednesday, Feb. 10, 2021, at Blackhawk Technical College in Janesville, Wis. Angela Major/WPR

Gov. Tony Evers said Tuesday that his administration had struck a deal with the federal government to allow Wisconsin to continue receiving more than $70 million per month in food assistance.

The funding — which was set aside for states with statewide COVID-19 emergency declarations — had been in limbo ever since the Wisconsin Supreme Court struck down Evers' last statewide emergency order and mask mandate.

In a statement issued Tuesday, Evers said his administration had reached a deal with the U.S. Department of Agriculture and Food and Nutrition Service to ensure the state will continue receiving the food assistance benefits.

According to Evers, the USDA and FNS agreed to continue providing the enhanced funding after Wisconsin Department of Health Services Secretary Karen Timberlake issued a new emergency declaration. That document, which Timberlake signed on Apr. 8, directed the department to continue leading Wisconsin's COVID-19 testing and vaccination efforts among other steps. The department has already been overseeing those efforts without the declaration.

"I'm proud we were able to work with our federal partners to come to an agreement that will ensure we can keep providing these critical resources to Wisconsinites across our state," Evers said in a statement.

The prospect that Wisconsin could lose the enhanced federal food assistance came to light earlier this year, right before GOP lawmakers were scheduled to vote to repeal Evers' emergency order.

In a memo requested by state Rep. Evan Goyke, D-Milwaukee, the Legislature's nonpartisan budget office wrote that nearly 243,000 Wisconsin households received the funds in January. Without a state emergency or disaster declaration, the budget office wrote, those households would lose these additional benefits.

Evers' office said the federal funding in question now totaled more than $70 million per month. When the issue was first flagged in January, the Legislature's budget office said the total was roughly $50 million.

When they learned of the prospect of losing federal funding, GOP lawmakers had their own proposal for how to preserve it, though the idea turned out to be short-lived.

Republicans amended a broad COVID-19 bill to let the governor issue a bare bones emergency order solely for the purpose of receiving federal funds. But they attached it to controversial provisions like a ban on public and private vaccine mandates and a measure to give the Legislature's budget committee veto power over federal COVID-19 funds. Evers vetoed the plan.

Republicans also voted to strike down Evers' previous emergency declaration, but the governor declared a new one on Feb. 4 that remained in effect until the Supreme Court struck it down on March 31.

With the governor's emergency order gone, and the federal funds in jeopardy, Assembly Speaker Robin Vos, R-Rochester, said Tuesday morning that the solution would be overriding the governor's veto of the COVID-19 bill.

While Republicans could still try to override that veto for other reasons, Evers' deal with President Joe Biden's administration appeared to clear up the federal funding questions.