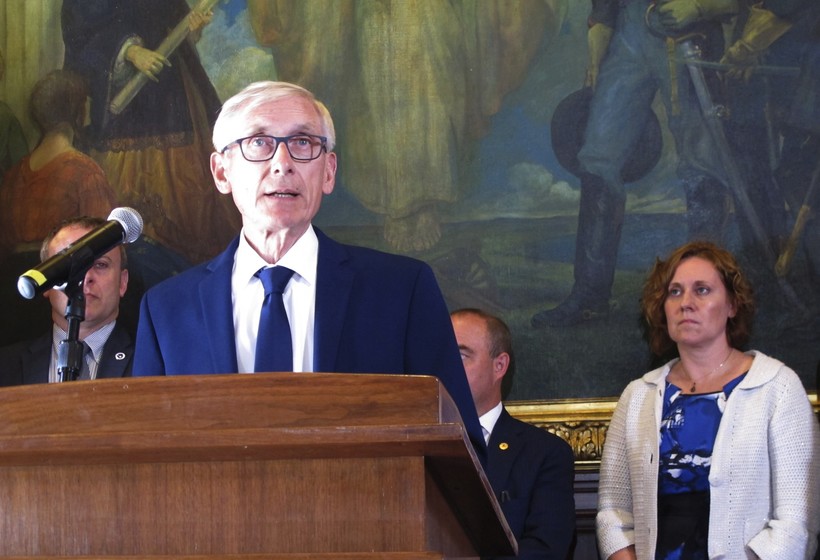 In this June 20, 2019, file photo, Wisconsin Gov. Tony Evers is surrounded by Democratic lawmakers and members of his Cabinet at a Capitol news conference in Madison, Wis. Scott Bauer/AP File Photo

Gov. Tony Evers' administration will move forward on its own with the purchase of up to 10,000 ventilators and 1 million protective masks after GOP lawmakers rejected the governor's plan for a more sweeping state response to the new coronavirus.

The tension between the governor's office and GOP leaders was laid bare Saturday when Republicans released a letter attacking Evers' proposal and the governor's chief of staff responded in kind, telling Assembly Speaker Robin Vos, R-Rochester, and state Senate Majority Leader Scott Fitzgerald, R-Juneau, that they were more interested in "political squabbles" than in working to prevent the further spread of COVID-19.

Evers wanted the Republican-controlled Legislature to approve a broad coronavirus bill that would cost the state at least $706 million and — potentially — much more. The plan's costs could escalate because it would give the state's Department of Health Services the "sum sufficient" power to spend whatever it deems necessary to address COVID-19.

In addition to freeing up funding, the governor's coronavirus bill would suspend the state's voter ID requirement during a public health emergency, increase state payments to low-income residents and give the Evers administration more leeway to adjust the state's Medicaid rules to capture federal funding.

The governor also wanted the Legislature to approve a separate resolution that would extend his broad emergency powers to deal with COVID-19 "indefinitely." Under current law, those powers last 60 days.

But based on emails traded over the weekend between the governor and legislative leaders, Evers' plan is going nowhere in the Legislature, at least in its current form.

On Friday night, Chris Patton, Evers' deputy secretary of the Department of Administration, sent an email to Vos and Fitzgerald stressing the need for changes at the state level so that DHS could adapt to the crisis.

"We cannot possibly overstate the severity of this situation, the importance of flexibility to respond appropriately and expeditiously to COVID-19, and that any delay in action due to an inability to be nimble could have catastrophic consequences for the people of our state," Patton wrote.

That same night, Vos shared a memo from the nonpartisan Legislative Fiscal Bureau which estimated that under the $2 trillion federal economic stimulus bill approved Friday, Wisconsin could expect to receive more than $2.2 billion, including $1.9 billion in direct aid to state government.

On Saturday afternoon, Vos and Fitzgerald sent a public letter to Evers telling the governor that because of the way the stimulus bill was written, Evers did not need lawmakers' approval to spend the federal funding, a point verified Sunday by Legislative Fiscal Bureau director Bob Lang.

Fitzgerald and Vos urged Evers use Wisconsin's share of federal funding to pay for the state's fight against COVID-19 immediately, without the Legislature's help.

"While we wish circumstances were different so oversight was required, these new federal dollars do not appear to require any legislative oversight," the GOP leaders said in their letter.

"We urge you to do that immediately and not delay," they added.

"As we are sure you are aware, our current general fund balance can’t support that request, so we are very concerned about the impact on other vital parts of state government if we are not careful in the use of state dollars," Vos and Fitzgerald wrote.

Evers' Chief of Staff Maggie Gau responded in an email to Vos and Fitzgerald Saturday night, stressing that the governor's administration had already been taking extensive action to address the new coronavirus.

"I must express my disappointment that instead of working together to address COVID-19 in Wisconsin, it seems you are more interested in having political squabbles that are not focusing on the actual fight — saving lives and working to prevent the further spread of COVID-19 in our state," Gau wrote.

Additional emails shared by the governor's office show that Evers' staff first shared details of the governor's sweeping coronavirus bill Republicans on Saturday, March 21. At that point, the $2 trillion federal stimulus package was still a work in progress.