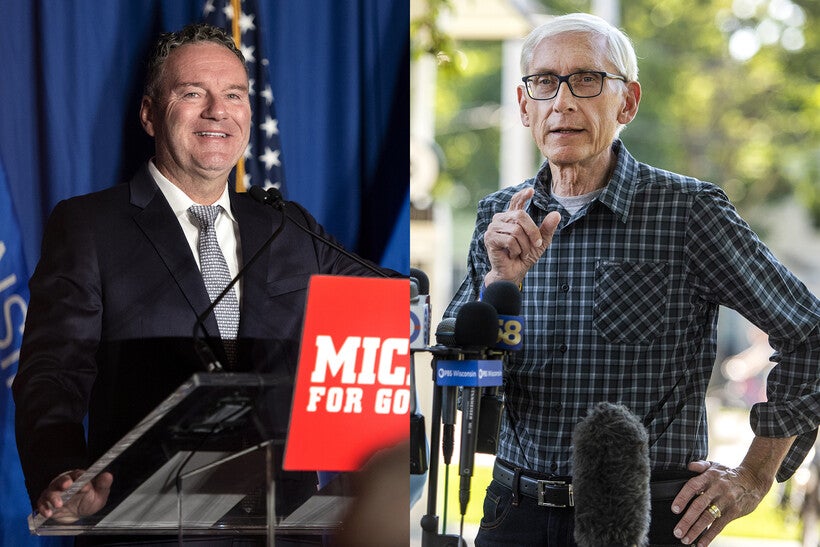 Construction executive Tim Michels, left, and Gov. Tony Evers. The two will face off in the November election for governor. Angela Major/WPR

Evers, Michels to debate just once before election

The Wisconsin Broadcasters Association will host the debate on Oct. 14
By Shawn Johnson
Share:

The candidates for governor will debate just once before voters head to the polls this year.

Democratic Gov. Tony Evers and Republican challenger Tim Michels announced Monday that they'd agreed to debate Friday, Oct. 14. The event is sponsored by the Wisconsin Broadcasters Association, whose debates are typically carried by TV and radio stations throughout the state.

It's rare for there to be just one debate in a general election campaign for governor, but both the Evers and Michels campaigns were onboard with the plan.

"We are pleased to announce that our two campaigns have reached an agreement regarding the upcoming Wisconsin Broadcasters Association debate," read a joint statement issued by Evers campaign manager Cassi Fenili and Michels campaign manager Patrick McNulty. "There are plenty of differences between the two candidates, but we agree that voters deserve this opportunity to hear directly from each candidate. This will be the only debate between the candidates before the November election."

The WBA debate will be held in Madison and include journalists from around the state.

Debates were a point of contention in the GOP primary for governor where Michels agreed to some, but not all events with the other candidates. This will be Evers' first debate since he ran against former Gov. Scott Walker in 2018.