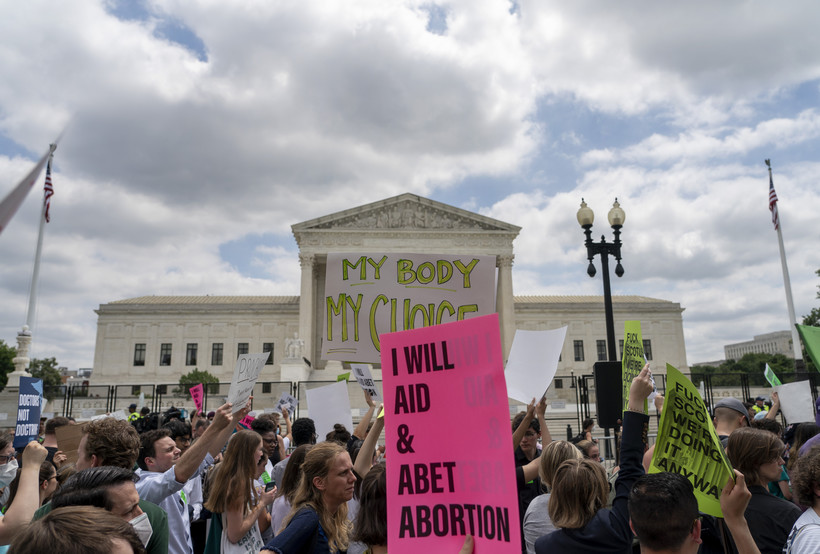 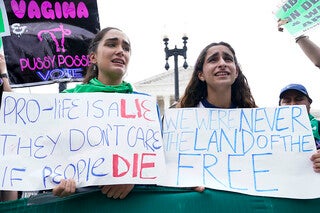 In the wake of a Supreme Court ruling overturning Roe v. Wade, Wisconsin's congressional delegation and contenders for the state’s top elected positions offered a wide range of reactions Friday.

The Supreme Court handed down its ruling Friday morning. In a 6 to 3 decision, the court decided a constitutional right to an abortion — which had been upheld for about a half century — no longer exists.

That ruling revives a 173-year-old abortion ban in Wisconsin, making the procedure illegal unless it’s deemed medically necessary to save the patient's life.

Here’s what the state’s congressional delegation and candidates for governor and Senate had to say:

In a press release, Democratic U.S. Sen. Tammy Baldwin said the decision took away the ability of women to make personal choices about their health and body.

"Republicans have taken Wisconsin women back to 1849 and it is Republicans who want to keep us there with support for having politicians interfere in the freedoms of women who will now have fewer rights than their mothers and grandmothers have had for decades," Baldwin said. "I ask people to join this fight with their voices and their votes because we will not be taken back, we will move forward."

Republican U.S. Sen. Ron Johnson, in a statement released on Twitter and Facebook, called the decision "a victory for life."

"This decision will now allow that democratic process to unfold in each state to determine at what point does society have the responsibility to protect life," Johnson said. "Hopefully, the debate will be conducted with sincerity, compassion, and respect for the broad range of views that people hold."

Today is a victory for life and for those who have fought for decades to protect the unborn. For almost 50 years the decision of nine unelected Justices prevented a democratically derived consensus on the profound moral issue of abortion. Now the debate can be returned to states. pic.twitter.com/cmH8jwIJDd

Democratic U.S. Rep. Mark Pocan said on Twitter he was angry, but not surprised by the decision.

I’m angry — but I’m not surprised. Republicans have been working to eliminate abortion for years, and they won’t stop here. The domino effect this decision could have on our rights is horrifying. We must turn our anger into urgency, and act immediately to protect our freedoms.

"The deeply personal decision to terminate a pregnancy should be made by individuals and their doctors, not politicians," Pocan said in a statement.

Democratic U.S. Rep. Ron Kind said in a statement the decision would have "devastating consequences for women and families across the nation."

Democratic U.S. Rep. Gwen Moore said in a video posted to Twitter that the decision was "very likely the end of people having personal freedom over their bodies."

"Unenumerated rights are now all on the chopping block," Moore said.

A truly terrifying day in America.

The extremist, partisan Supreme Court has attacked personal liberties and freedom with their radical decision that ignores legal precedent and imposes their religious views on the entire country. pic.twitter.com/EfDku2BcmE

Republican U.S. Rep. Glenn Grothman said in a statement the Court's decision was "correct and much-needed."

"(U)nborn children are human beings," Grothman said. "We will see where the public and churches stand."

Republican U.S. Rep. Tom Tiffany said the decision "paves the way for us to protect all life."

"Today’s decision correctly returns this authority to legislatures and gives the American people a direct say in the way abortion is governed in their state," Gallagher said.

Gov. Tony Evers, in a video released on his campaign's Twitter page, said he would do everything in his power to protect reproductive health care as long as he remains governor.

"It's just the right thing to do," Evers said.

I’m horrified by the SCOTUS decision to overturn Roe v. Wade. The future of reproductive healthcare rights will be difficult, but I’ll do everything in my power to make sure that all people have abortion access and reproductive freedom in Wisconsin. pic.twitter.com/VAST9YEhS7

Former Republican Lt. Gov Rebecca Kleefisch called the decision "a victory for unborn babies across America" in a statement.

"(T)he pro-life community can focus all of our efforts to supporting moms, dads, and their babies to promote a culture of life and success for families," Kleefisch said. "We must look to a future where we value life and support moms and babies."

Republican Kevin Nicholson said on Twitter the decision returned the matter of abortion "to the American people, where it should have always been."

The Constitution was designed to protect Life, Liberty and the Pursuit of Happiness. The issue of abortion has been returned to the American people, where it should have always been. https://t.co/Sk0geJF943

State Rep. Timothy Ramthun, R-Campbellsport, has not commented publicly on the ruling.

"I might not be here today if Roe v. Wade hadn’t allowed my mother to make the best decision for her health and safety," Barnes said. "The American people deserve elected leaders who will go to the mat to protect our basic freedoms and that’s what I intend to do."

It doesn’t end with Roe. They are coming for contraception and gay rights next.

Everything is on the line right now. https://t.co/eAS4tclWwB

Milwaukee Bucks executive Alex Lasry said in a statement Friday morning the news "is a direct assault on women’s rights."

"(T)oday will be remembered as one of the darkest days in the history of the Court," Lasry said. "Every woman deserves the right to control their own reproductive freedom — an essential element of a woman’s right to self-determination."

Wisconsin State Treasurer Sarah Godlewski said in a statement "(i)t’s time to act, to mobilize, and to take back our rights and freedoms."

On Twitter Godlewski called the SCOTUS decision an "all-hands-on-deck" moment.

Outagamie County Executive Tom Nelson called Friday "a day of infamy for women" in a statement.

"(W)e need bold, immediate action in the U.S. Senate to protect women’s lives," Nelson said. "Democrats must end the filibuster, codify a national right to a safe and legal abortion and expand the Supreme Court."

Editor's note: this story will be updated.