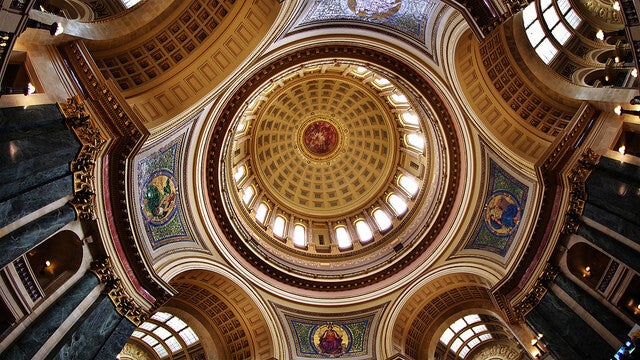 Some State Senate Republicans Have Voiced Concerns Over Craig Thompson's Past Connections To Road-Building Lobby
By Shawn Johnson
Share:

Gov. Tony Evers' nominee to lead the state Department of Transportation told a panel of state senators on Wednesday he'll judge the success of the department by whether people see their roads improving.

Transportation Secretary nominee Craig Thompson also reiterated his belief that the state needs to increase revenue to maintain its roads, though he didn't say exactly what mix of funding the governor would propose in his budget.

Out of all of Evers' cabinet nominees, Thompson faces perhaps the steepest path to confirmation in the Senate, where Republicans hold a 19-14 majority.

Thompson led the Wisconsin Transportation Development Association, an organization that represents road builders and local governments among other groups. State Senate Majority Leader Scott Fitzgerald, R-Juneau, has said Thompson's road-builder ties bother some members of his caucus who think the DOT is spending too much already.

But at his Senate confirmation hearing, Thompson faced a mostly friendly audience. Nobody testified against his nomination and a wide range of groups registered their support.

Thompson said his approach at the DOT would be straightforward.

"I would view how well we're doing at the department … by whether people notice that the conditions are improving," Thompson said. "That their transportation system is getting better, and that metrics back up that we are improving that situation."

Thompson comes to the DOT well aware of the state's financial situation. He served on a commission that studied the issue under former Gov. Scott Walker. That panel recommended a mix of taxes and fees, which Walker rejected.

Evers is far more open to tax or fee hikes, signaling to reporters recently that his budget proposal would likely call for an increase in the gas tax.

Thompson said without some form of new revenue, new road projects won't get done and road conditions will worsen.

"The conditions on our state highway system continue to decline," Thompson said. "We still need an additional $360 to $400 million a biennium in order to just maintain the current level of condition that we have on our state highway system. That doesn't begin to mention the rebuilding of the interstate system that still needs to occur or aids for the local units of government."

GOP leaders have said they would be open to tolling to pay for roads, though Thompson said that would likely take too long to implement.

"We are somewhat limited in our ability to fix what I think is a today problem … through tolling," Thompson said.

Republicans included a $2.5 million tolling study in the last state budget only to see it vetoed by Walker. Thompson said he didn't believe Evers would include a similar study in his budget, but that the administration would be open to discussing it.

Thompson said the DOT's first priority in the next budget would be increasing local road aids and the state highway rehabilitation program.

"The priorities are fixing what we have first," Thompson said.