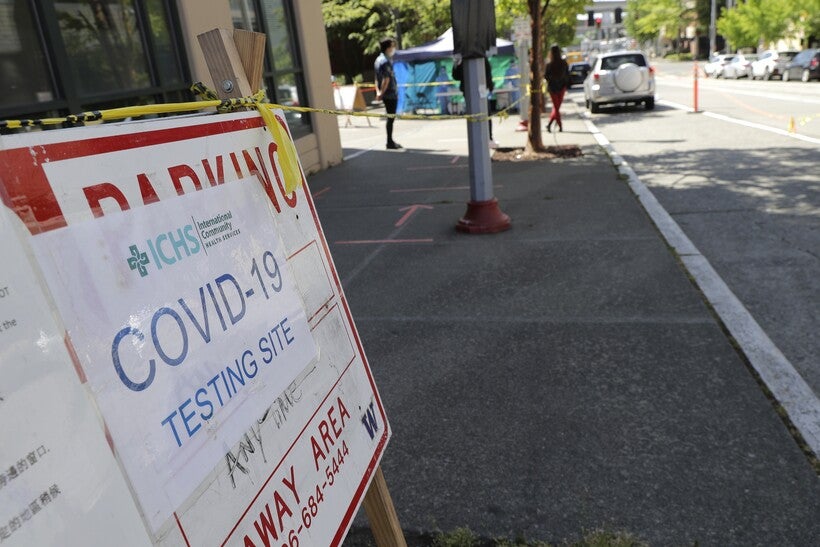 A sign at the International Community Health Services clinic in Seattle's International District, points the way to a drive-up and walk-up testing site for COVID-19, Friday, May 15, 2020. As testing supplies for coronavirus have become more abundant, the clinic has been able to offer testing to anyone in the community by appointment if they are experiencing symptoms. Ted S. Warren/AP Photo

Gov. Tony Evers has unveiled his plan for spending $1 billion in federal funds to combat COVID-19 in Wisconsin.

The money will be used to pay for ongoing efforts to test people for the virus, identify those who may have been exposed and prepare for a potential surge.

In an interview with WPR, Evers said some of the funding will be used to reimburse the state for COVID-19 related expenses.

"But most importantly, it’s getting money to the counties and the tribal nations for testing and for the contact tracing. And the more we do that, the better we’ll be in a position to say that our state is safer," Evers said.

The plan also includes a $45 million pilot program to incentivize testing, paying providers $35 for every test completed by Aug. 31.

Evers said his administration was working on the new programs before the Wisconsin Supreme Court struck down the state's "Safer at Home" order last week.

"That is a state’s role that the Supreme Court did not take away from us, and that is to focus on the virus," Evers said. "So that we will continue to do. That will be because the Safer at Home isn’t there and because frankly, we can’t get any agreement on some changes via emergency rules. So we’re focusing on what we can do."

Republican legislative leaders signaled last week they weren't interested in negotiating a plan to reinstate some statewide measures to slow the spread of COVID-19.

Evers said he will continue to meet with lawmakers on the state's COVID-19 response, but said "there’s not much left to talk about" regarding a new emergency rule.

Funding for the new programs comes from the federal Coronavirus Aid, Relief, and Economic Security (CARES) Act, which was passed at the end of March. Part of the act sets aside $150 billion in direct aid payments to state and local governments.

The Legislative Fiscal Bureau estimates the state could receive about $2.26 billion of that funding based on its population, with some funding going directly to local governments with populations greater than a half-million people. That includes the city of Milwaukee, Milwaukee County and Dane County.

Evers said his administration is still finalizing plans for the rest of the federal funding. But he said aid for small businesses and the agriculture industry are top priorities.