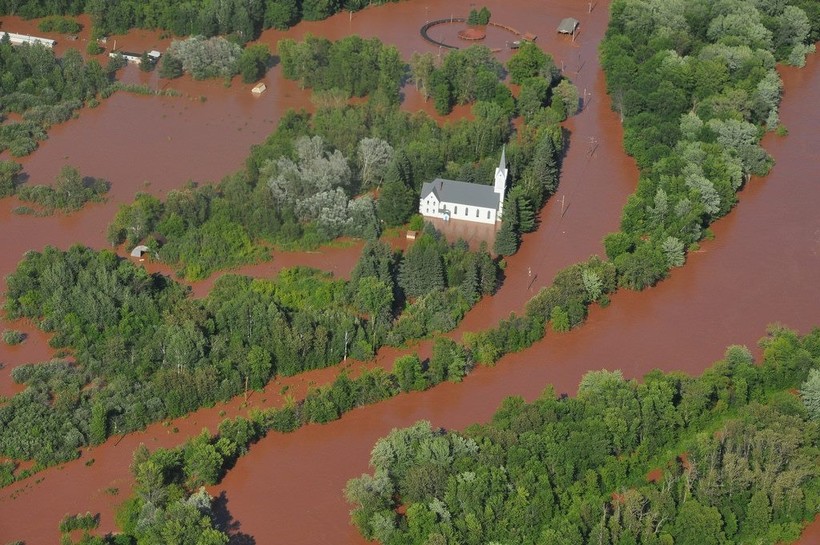 The spending plan for the next two years includes ambitious efforts to reduce climate change impacts, reauthorizes the Knowles-Nelson Stewardship Program, addresses PFAS contamination and brings back a proposal to replace lead service lines among other measures. But many of the Democratic governor's proposals are likely to be scaled back or outright rejected by the Republican-controlled Legislature.

A number of Evers' climate-related proposals come from a task force he created to address the issue. The budget would create an Office of Environmental Justice to promote an equitable transition to clean energy and reduce greenhouse gas emissions.

Evers' budget would also include $30 million to flood-proof communities, aid farmers and support lakefront homeowners whose properties are at risk from erosion along the Great Lakes. His budget proposal would provide additional funding for county conservation staffing.

"The climate crisis is taking an undeniable toll on folks across our state," said Evers in his budget address Tuesday. "Every Wisconsinite — whether they live in the Driftless, the Central Sands, or the Northwoods, or in the heart of our urban areas — has experienced the effects of climate change."

Evers also proposed generating an additional $100 million through utility contributions to the Focus on Energy Program, as well as creation of a $4 million clean energy research grant. The budget would also set aside $10 million from the Volkswagen emissions settlement to reinstate a grant program for electric vehicle charging stations.

"If you've talked to county supervisors, if you talk to municipal and town elected officials who've had to deal with road washouts ... with the severe damage to crops and forests that we've experienced, I don't know how you argue that we shouldn't make an investment to be prepared for that in the future," said Clark.

Assembly Speaker Robin Vos, R-Rochester, has criticized Evers in the past for creating a task force to address climate change. The top Republican leader has questioned whether climate change is real despite widespread consensus among scientists. State Rep. Mike Kuglitsch, R-New Berlin, served on the task force and chairs the Assembly's energy and utilities committee, he said it's too early to comment on the details of the governor's budget.

State Sen. Rob Cowles, R-Green Bay, said Evers was "biting off more than is realistic." But, he thinks there is will among lawmakers to achieve consensus in some areas.

"I think that there will be movement on a number of things in the natural resources, energy area — maybe not to the extent that the governor wanted," said Cowles.

Cowles and groups like the Wisconsin Conservative Energy Forum say it would be better to address many proposals within the budget as separate legislation. Cowles, who chairs the Senate's natural resources committee, thinks a case could be made to increase funding for Focus on Energy, but not double it as the governor has proposed.

Evers is also proposing to reauthorize the Knowles-Nelson Stewardship Program through $70 million a year in bonding over the next decade — more than double the amount the state has been authorized to spend in recent years. In the past, Republican lawmakers have spoken out against continued funding for the program.

The Wisconsin Department of Natural Resources has used roughly $544 million in stewardship bonding to purchase more than 690,000 acres of land since the program started in 1989 through March 2019, according to the Legislative Fiscal Bureau.

Supporters of the land purchase program argue there is strong support for land conservation statewide. A survey last August found 92 percent of around 500 people surveyed support reauthorizing the program for another 10 years, including more than half of conservative voters. The COVID-19 pandemic has further highlighted the value of public lands, said Matt Dallman, deputy state director of the Nature Conservancy in Wisconsin.

"There's still room to utilize a program like this and protect some valuable lands for nature and definitely for the people that come up here and recreate and enjoy our lands," said Dallman.

Dallman argues public lands are vital to the state's $24 billion forest economy and outdoor recreation economy, which contributes $7.8 billion each year. He added that every acre protected in the state provides a $3,000 return to the state's overall economy, according to research from the Nelson Institute for Environmental Studies at the University of Wisconsin-Madison. The program costs nearly $20 per person each year.

Cowles said he thinks the Legislature should reauthorize the stewardship program. But he said the question is how much funding the program should receive for land purchases.

"There's plenty of conversations going on about a lesser amount, so I would probably be engaged in trying to restore that with other advocates — Republican and Democrat — to do something on stewardship," said Cowles.

The program was extended under the current budget through June 30, 2022. At its peak, the stewardship program was funded at $86 million annually.

Evers is also proposing to devote $40 million for the replacement of lead service lines through the state's Safe Drinking Water Loan Program. The governor made a similar proposal under the current budget that was rejected by Republican lawmakers.

GOP legislators say replacing lead lines would be too expensive and have supported local efforts to address issues or install water filtration systems. Cowles backed a proposal that allowed local governments and utilities to provide financial assistance to customers for the replacement of water lines. He said several cities have taken advantage of the program to address lead lines, including Green Bay.

"I don't think the governor's office has made a clear case on why they have to do this when it's working in other places," said Cowles.

Deteriorating lead pipes can lead to unsafe levels of lead in drinking water. Children are particularly vulnerable to lead poisoning, which can cause developmental issues among other health problems.

"Last session, Republicans in the Legislature played politics with the health of Wisconsin children and rejected this funding because they thought too much of it would go to help families in Milwaukee," said Tony Wilkin Gibart, executive director of Midwest Environmental Advocates in a statement. "Lead contamination affects children throughout our state, and families should have access to clean water no matter where they live."

State water utilities have identified more than 176,000 lead service lines that are publicly owned and more than 148,000 private lead lines.

Milwaukee has more than 70,000 lead service lines that need to be replaced, which could cost the city more than $750 million.

The governor's budget would create 11 new positions to carry out the state's action plan for so-called "forever chemicals" known as PFAS. Perfluoroalkyl and polyfluoroalkyl substances, commonly called PFAS, are chemicals found in firefighting foam and everyday products that don't break down easily in the environment. PFAS has been linked to health problems, including cancer, thyroid disease and reproductive issues.

The budget would also provide $10 million from the state's main fund in each year of the biennium for a municipal grant program that local governments could use to investigate, test, treat or dispose of the chemicals or PFAS-containing firefighting foam. It would also include funding for testing public water supplies, as well as $1 million to assist with collection and disposal of firefighting foam that contains PFAS.

Environmental regulators are monitoring more than 50 sites with PFAS contamination across the state, including Superior, Marinette, Madison and Milwaukee. The sites include military installations, industrial areas and waterways.

The Marinette and Peshtigo area is considered the site of the state's largest, most complex investigation into PFAS contamination stemming from Tyco Fire Products' fire training facility. Around 130 residents have been provided with bottled water since 2017 due to elevated PFAS levels in private wells.

Other environmental items included in the budget: