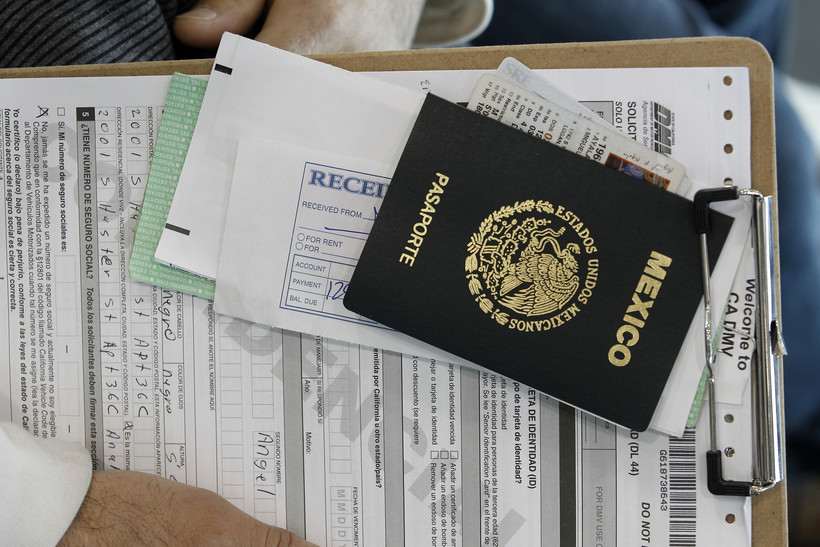 In this Jan. 2, 2015 photo, Miguel Ayala holds his application with his Mexican passport while waiting in line with other immigrants at a California Department of Motor Vehicles office to register for drivers licenses in Stanton, Calif. Nick Ut/AP Photo

Republicans Reject Both Of Evers' Proposals
By Phoebe Petrovic
Share:

Every time Luis Tapia gets behind the wheel, the Racine high schooler fears he may get pulled over, taken from his family and deported.

Julio Cesar Gutema works three jobs to pay for tuition at Milwaukee Area Technical School, which is one of the only colleges he could afford as an immigrant ineligible for in-state tuition at University of Wisconsin System schools.

Both Tapia and Gutema — who were brought to the United States illegally as children — say their lives could improve if two provisions in Gov. Tony Evers’ $83.4 billion two-year budget pass the Legislature.

Among the budget proposals praised by Democrats and lambasted by Republicans, two apply directly to immigrants. Evers’ plan recommends expanding eligibility for state-issued driver’s licenses and identification cards, as well as in-state tuition, to immigrants living in the country illegally.

Republicans say issues like these need to be debated at the federal level, not in the Wisconsin state budget.

"I don’t think there are many members of the Republican caucus who support this either," Fitzgerald said in a statement. "It’s disappointing that the governor decided to make his budget a liberal wish list that included proposals like these and billions of dollars in tax hikes."

But supporters say the proposals are long overdue.

Tapia, a senior at Horlick High School, worked with his grassroots group Youth Empowered in the Struggle to expand driver’s license eligibility to people living in the country illegally, as well as people with several minor infractions or unpaid tickets whose licenses otherwise would be revoked. In January, the Racine City Council passed an advisory resolution supporting exactly that.

"It’s this constant fear of not knowing whether you’d be able to come back home to your family," Tapia said.

In Evers’ budget address, the governor noted the particular importance of expanding access to driver’s licenses for people in rural areas with limited public transportation.

"This makes our roads and our communities safer, and helps strengthen our economy and Wisconsin families," Evers said.

"We want to make sure that on the shared roadway that people are safe and that they have the documentation to drive legally and that we keep records accordingly," Boardman said, adding this provision would allow the state to ensure more drivers have passed the knowledge and skills tests requisite for safe, licensed driving.

In the agricultural industry, a mainstay of Wisconsin’s economy, both the Dairy Business Association (DBA) and the Wisconsin Farmers Union (WFU) support providing driver’s licenses to non-citizens.

John Holevoet, the DBA’s director of government affairs, said permitting immigrants living in the country without documentation to obtain driver’s licenses is both an issue of economic development and public safety.

"The reality is a lot of our farms rely on immigrant labor and they’re located in rural areas, so really the only way for those peoples' employees to get to work is for them to drive," Holevoet said, who expects farms to better find and retain workers under this provision. "We already struggle to find enough workers in agriculture and in various other segments of our economy, and we want to make sure we are an appealing place for people to work."

Immigration advocates note Wisconsin previously allowed immigrants without lawful presence to obtain driver’s licenses, but it was rolled back in the mid-2000s, following the federal government’s passage of the REAL ID law. This placed stricter requirements on identification cards, and prompted Wisconsin to require people seeking driver’s licenses to demonstrate their U.S. citizenship or lawful immigration status.

Christine Neumann-Ortiz, executive director of the Milwaukee-based advocacy group Voces de la Frontera, has focused on restoring driver’s license rights for the past year. They plan to push lawmakers to support the measure during a lobby day Thursday, March 14 at the state Capitol.

"The driver's license campaign is very important, really, for all Wisconsinites," Neumann-Ortiz said. "It's a win-win situation."

She says that’s because if more people are eligible to get driver’s licenses, more drivers will have to pass the DMV’s safety tests and will be able to get car insurance.

"Personally, I think we need to solve this (immigration problem) at a national level before we start extending special benefits to those that are here undocumented," Steineke said.

Republicans have announced plans to draft a counter budget proposal. Fitzgerald said in a statement they plan to "protect taxpayers" wherever possible, and Steineke said their plan will exclude Evers’ two immigrant-related provisions.

But Neumann-Ortiz and Holevoet both say Wisconsin cannot afford to wait for the federal government to act.

"The best thing we can do is not create new problems," Neumann-Ortiz said. "I think it's unconscionable to stand by while one or two driving without a license offenses can lead to two children losing a father, a wife losing her husband, a brother losing his brother."

"The federal government is unwilling to act in any kind of quick manner to address that problem," said Holevoet. "So that then leaves us with the question of: what can we do as a state to try to work within the current situation that we find ourselves in?"

The District of Columbia and 12 states, including Wisconsin’s neighbor Illinois, already permit immigrants living in the country illegally to obtain driver’s licenses.

Opinions also split down party lines for the extension of in-state tuition at UW schools to students who live in the state but are not U.S. citizens.

"We're going to make sure that, regardless of whether a kid was born in this country, if they went to a Wisconsin high school and have lived here for three years, they shouldn't have to pay more for tuition like an out-of-state student — they should be treated like any other kid from Wisconsin," Evers said in his budget address.

Gutema is one of those students. One day, he wants to help defend hospitals against hackers. Right now, he’s a student at Milwaukee Area Technical College, studying IT software development.

He says MATC is one of the only schools he could afford. Gutema is not a U.S. citizen, but was able to attend MATC because Wisconsin technical colleges charge tuition based on state residency, a spokesman for MATC confirmed.

"I didn't have really any other options," Gutema said.

The governor’s proposal, Gutema said, will "open up a lot of opportunities for a lot of youth who may not have a bright future if it weren’t for this."

Right now, he says, some in his community give up on trying to obtain an education, instead working to support themselves and their families because tuition is unaffordable.

Gutema said expanding resident tuition as Evers is proposing would allow more people the opportunity to pursue an education.

"I don’t feel like, at least in the eyes of the state, I'm equal to every other person here," Gutema said. "It's dehumanizing, you know, almost in a way because what makes me any different than any other person trying to get an education."

Steineke repeated his deference to federal lawmakers on questions of immigration, saying Wisconsin should wait on this issue until Congress finds a long-term solution.

This provision, too, would be a restoration of something Wisconsin previously offered — albeit briefly. The 2009 budget allowed students without legal status in the U.S. to pay resident tuition with requirements similar to Evers’ proposal. It was repealed in 2011.

The next fiscal year begins July 1.