Gov. Tony Evers' administration has asked the Wisconsin Supreme Court to dismiss a Republican effort to overturn Wisconsin's "Safer at Home" order, telling justices that such a move could "invite a dangerous public health backslide," as the state continues to fight the COVID-19 pandemic.

In a legal brief filed Tuesday, the administration also argued state Department of Health Services Secretary Andrea Palm was well within her legal right to issue stay-at-home orders, which it argued had been successful in helping to slow the spread of the new coronavirus.

"These orders, and the actions of Wisconsin residents to fight the coronavirus, have been effective," wrote attorneys for the Evers administration. "At least hundreds, and quite possibly thousands, of lives have been saved."

Republican lawmakers — led by Assembly Speaker Robin Vos, R-Rochester, and Senate Majority Leader Scott Fitzgerald, R-Juneau, — filed their lawsuit last week, asking the Supreme Court to overturn the latest stay-at-home order on the grounds that it was an abuse of executive power. Lawmakers contend that the Evers administration should have issued the order through the legislative rule-making process, which give lawmakers veto power over the executive branch. 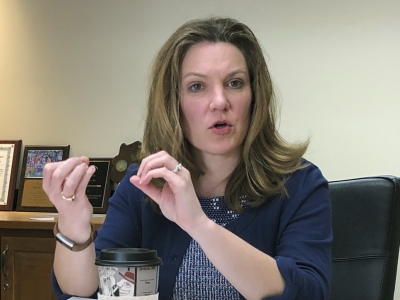 The Evers administration, which is being represented by the Wisconsin Department of Justice, argued Tuesday that such a requirement would dramatically slow the state's ability to respond to a virus outbreak when time is of the essence.

"As applied to a crisis like the present pandemic, these procedures would be bizarre, inadequate, and unpredictable," lawyers for the administration wrote. "The petitioners point to no state that engages in this absurdity."

GOP lawmakers had asked the court to issue a six-day stay if it strikes down the current stay-at-home order, arguing that would give the Evers administration time to craft a new order with the help of the Legislature.

But the administration told justices any such order would take weeks under the quickest scenario.

"Compare that with the first Safer-at-Home order," wrote DOJ attorneys. "It was issued in response to modeling that showed, with approximately three days’ warning, Wisconsin had to act to halt the uncontrolled spread of COVID-19."

While Evers himself has issued several executive orders to respond to the COVID-19 pandemic, it has been Palm who has issued some of the most sweeping directives, including the stay-at-home orders.

The Evers administration argued those powers have historically rested with the executive branch in Wisconsin and elsewhere for good reason.

"Every state vests these powers in an executive agency with the flexibility and expertise to find a way through in the moment," wrote the administration's lawyers.

The Wisconsin Supreme Court has given Republicans until Thursday to respond to the administration's filing. Justices have not hinted at when they might rule in the case. The DOJ asked the court to hold oral arguments in the case if it does not dismiss the lawsuit outright.

Clearly, COVID-19 has gotten the court's attention. Justices have started holding oral arguments virtually, and justices issued a 5-2 decision in March that will postpone jury trials until at least May 22.

Wisconsin's current stay-at-home order is scheduled to expire May 26.