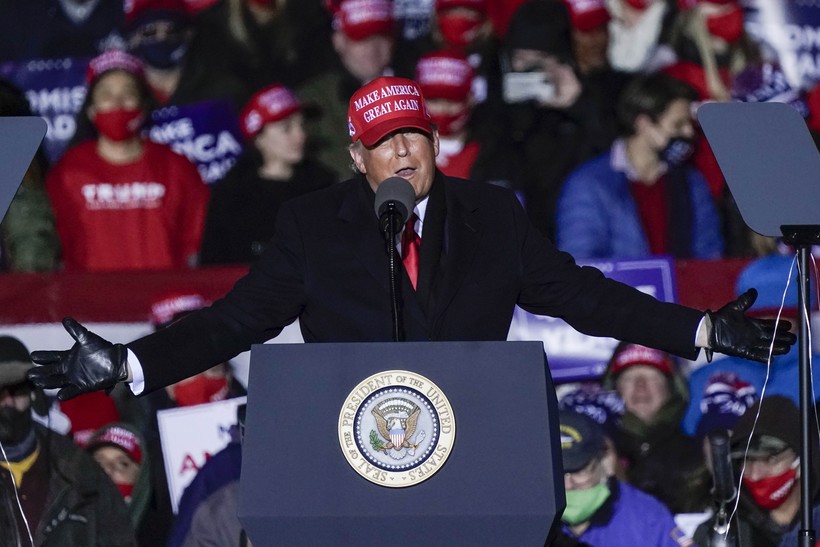 On Eve Of Election, Trump Tells Kenosha Crowd He Will Win A Second Term

On the eve of Election Day, President Donald Trump made a final push in Wisconsin, telling voters in Kenosha Monday night that he would win the state and the election Tuesday.

Trump spoke to a large crowd at the Kenosha Regional Airport — his second stop in the city during the campaign, and his third visit to Wisconsin in just one week.

The president told the group Wisconsin is the state that put him over the top in 2016.

Trump said he will ensure "peace and order" in the country. "We have a country that is very well united," Trump said.

The president’s visit comes after roughly 1.9 million Wisconsin residents have already voted, a figure that represents 63 percent of the state's overall turnout in the 2016 presidential election, according to the Wisconsin Elections Commission.

Both presidential candidates have been making last-minute efforts in the state where Trump won by less than 23,000 votes four years ago. Former Vice President Joe Biden and Trump were in Wisconsin on Friday.

Forty-eight percent of those surveyed said they support Biden, compared to 43 percent for Trump — a gap within the 4.4 percent margin of error.

Trump touted the economy under his leadership and pressed his message of law and order. The president falsely claimed credit for sending National Guard troops to Kenosha after the police shooting of Jacob Blake at the end of August incited days of protests and violence, boasting he "saved the city." National Guard troops were deployed at the request of Wisconsin Gov. Tony Evers.

Before Trump’s arrival, Blake’s family and community leaders held a counter rally at Civic Center Park in downtown Kenosha. Tanya McLean, a community leader and organizer with the Wisconsin Working Families Party, said voting won’t fix everything but without it, nothing can be fixed.

"We need to deliver a crushing blow to Trump and everything he stands for, and then we need to hold Joe Biden and Wisconsin Democrats accountable to ending police violence and taking bold steps toward justice for Jacob Blake, Breonna Taylor, George Floyd, Tony McDade and all victims of racist, brutal policing," McLean said in a written statement.

The president urged the crowd to vote Tuesday, calling the election the most important in the history of the country.

"I never thought I would say that, so get out and vote," Trump said. "I don’t know could (Biden) really win, are we serious about this? What the hell is going on, is he serious?"

The candidates have campaigned differently across the country and in Wisconsin. On Friday, Biden held an invitation-only event in Milwaukee for 50 people with social distancing measures in place.

Trump held his campaign stop Friday in Green Bay for hundreds of supporters, many without face masks, packed tightly into a designated standing area at Austen Straubel International Airport. Democrats have criticized these rallies as events likely to spread the coronavirus.

Wisconsin remains a hotspot in the country for COVID-19 cases. Thirty percent of people who were tested for COVID-19 over the past week were positive for the disease, according to the state Department of Health Services.

On Monday, Trump said the election is a choice between a "deadly Biden lockdown and a vaccine."

"We're rounding the turn, we have great vaccines coming," Trump said, adding that while being treated for coronavirus he was given Regeneron, but doesn't think he needed it. "We're going to make it free to anybody that needs it. I'm sure I didn't. I'm a perfect specimen."

Polls are open from 7 a.m. to 8 p.m. Tuesday. Because of the nearly 2 million people who have voted early, final election results in some Wisconsin counties aren't expected until early Wednesday morning or later.