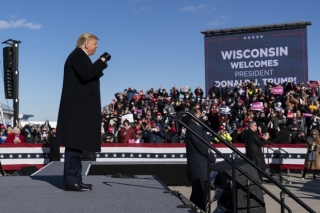 Democratic presidential candidate Joe Biden promised to listen to scientists and push legislation to mitigate the financial toll of the COVID-19 pandemic at Milwaukee's General Mitchell Airport on Friday evening.

"The American people don't give up, we don't give in," the former vice president said. "Unlike Donald Trump, we're not going to surrender to this virus."

The Democratic nominee stood behind a podium emblazoned with "Battle for the Soul of the Nation."

Biden talked about "building back better" from the COVID-19 pandemic — adding a Medicare-like option to the Affordable Care Act to extend more affordable health care protections to more people, creating new and better-paying jobs and shoring up Social Security, Medicare and Medicaid.

"Donald Trump thinks health care is a privilege," he said. "I think it's a right people should have."

Biden's speech in front of about 50 people, including Milwaukee Mayor Tom Barrett and the sheriffs of Milwaukee and Dane counties, followed a rally by President Trump in Green Bay earlier in the day, where Trump touted the event's large turnout and said a coronavirus vaccine would be ready "momentarily."

The Trump campaign's request to hold a rally at the airfield at General Mitchell on Oct. 23 was rejected. Airport officials told WTMJ-TV that the Biden campaign's event was permitted because the size fell well below the city-mandated 250 person maximum for large gatherings, and wouldn't disrupt airport operations.

"He said today at a rally that our doctors are the problem, he said they're making up deaths from COVID-19 because they get more money," Biden said. "My Lord." 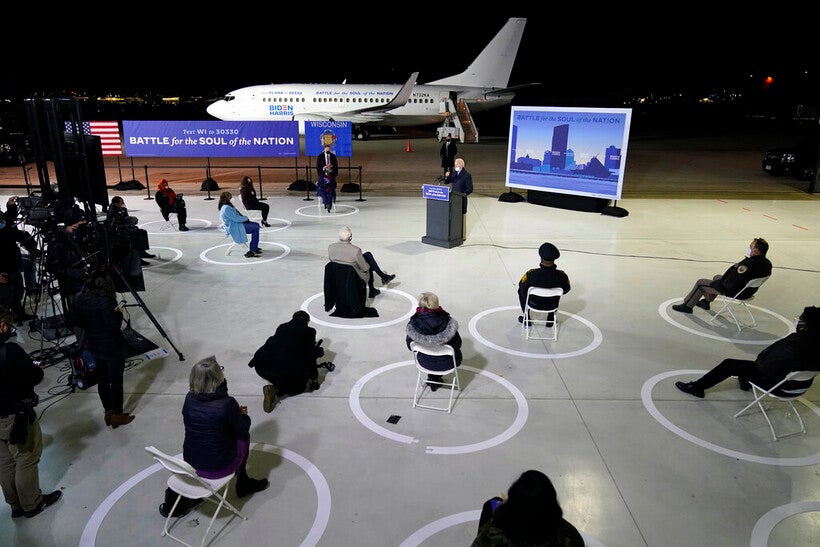 Biden talked about Monica Watry, an ICU nurse in Milwaukee who was in the audience. He said in a phone call with Watry, and in conversations with other medical professionals, he's heard about many nurses, doctors and first responders getting sick while waiting for personal protective equipment like masks and gowns. He said Watry and others were scared they might bring the disease home to their families, and that Watry had her husband wait in the garage with a bathrobe so she could immediately change out of her work clothes and head straight to the shower.

"So many people, over a thousand Monicas, have given their lives trying to save other lives," he said. "And this guy says they're making it up because they want to make more money."

He said Trump "waived the white flag" and surrendered to the coronavirus. Biden urged Americans to wear masks, saying medical professionals have said universal mask-wearing could save hundreds of thousands of lives.

"This isn't a political statement of us wearing these masks," he said. "For God's sake, it's a patriotic duty."

Biden's speech was preceded by remarks from U.S. Rep. Gwen Moore, a Democrat who represents Milwaukee and its suburbs. She described the United States' "trifecta of problems": a pandemic, a resulting economic crisis and a crisis of justice.

Biden praised Moore's work in Congress and offered his thanks to Milwaukee Mayor Tom Barrett and Sheriffs Earnell Lucas and Dave Mahoney for their long-standing support, dating back to his previous national campaigns.

"If I get elected, I'm coming back, Tom," Biden promised, to cheers and laughter.

He noted the pandemic's toll on Wisconsin and Milwaukee specifically, both in terms of economic strains and lives lost.

"More than 225,000 people — I think it's 229,000 as I speak — have already lost their lives to COVID-19," he said. "Two-thousand here in Wisconsin, 600 here in Milwaukee, each one memorialized by an empty chair this morning at breakfast, or tonight at dinner. An empty chair at MacArthur Square." 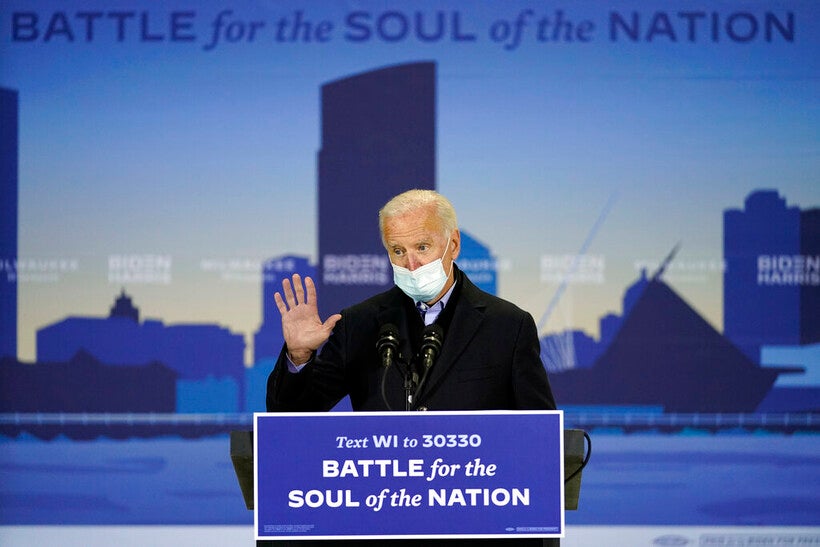 The former vice president outlined what he saw as Trump's failure to act on urgent issues, specifically the pandemic, but also climate change and racial justice.

Biden highlighted the loss of manufacturing jobs in Wisconsin even before COVID-19 and the even steeper declines since March. He specifically mentioned layoffs at Harley-Davidson, which cut 700 jobs over the summer.

Joann Sabir, co-founder of the small business incubator Sherman Phoenix in Milwaukee, also spoke before Biden. She likened her and her co-founder's effort to nurture new growth in the Sherman Park neighborhood in the wake of 2016 protests to Biden's path after an election victory.

She said COVID-19 has affected her family and her business, but that she and her family have been able to endure because of support from the local government. She called on new and seasoned voters to vote for Biden, to bring that same kind of leadership to the White House.

One of those first-time voters, 21-year-old Milwaukee native Terrence Moore, said he'd learned at Marquette University High School to be "a man for others," and at Kentucky State University to move "onward, upward and forward." He said those values led him to register to vote, and to cast his vote for Biden.

"This country has seen what happens when a bully is not stopped, what happens when people do not speak out against injustices," he said. "We, as a community, we can stop this bully from doing more harm to innocent people by voicing our opinions with our votes."

Biden, likewise, urged people to vote, after noting that millions have already cast their ballots.

"If you've already voted, get your mom, dad, brother, sister, neighbor — get them to vote," he said. "This election, I promise you, your grandkids are going to write about how it set the path for at least a generation here in America."