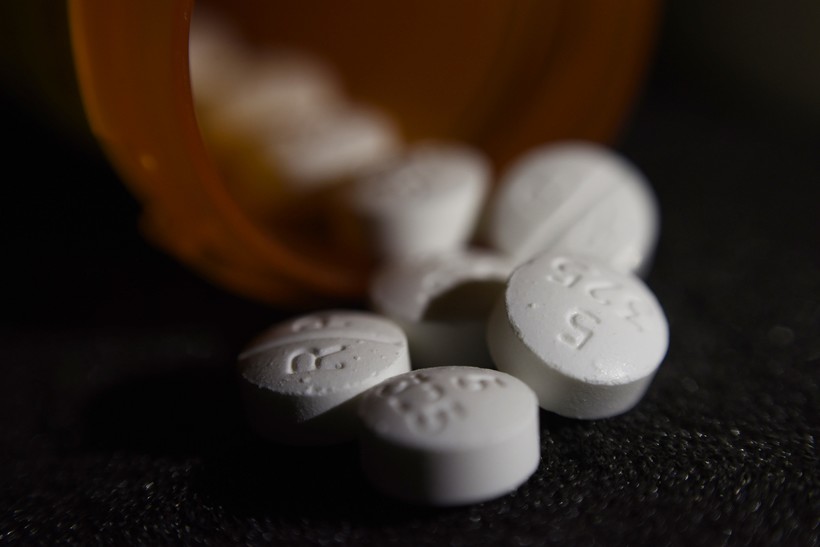 This Tuesday, Aug. 15, 2017 photo shows an arrangement of pills of the opioid oxycodone-acetaminophen. Patrick Sison/AP Photo

The number of patients brought to emergency departments for opioid overdoses more than doubled in Wisconsin over the course of a year.

Data from the Centers for Disease Control and Prevention show the country as a whole had a 30-percent increase in emergency room visits for opioid overdoses from July 2016 through September 2017. The Midwest saw the most dramatic increase — about 70 percent.

Of the 16 states hit hardest by the opioid epidemic, 10 saw significant increases in hospitalizations for overdoses. The largest increase — 109 percent — was in Wisconsin. A similar surge of cases was seen in Delaware. Health officials say the increase may be due to the availability of different or more powerful drugs like fentanyl.

Other states that have been dealing with the opioid epidemic for a long time, like Massachusetts, New Hampshire and Rhode Island, had modest decreases in opioid overdoses resulting in hospital stays.

"These decreases may possibly be related to interventions, including expansion of access to medication-assisted treatment," said Acting CDC Director Anne Schuchat.

According to the CDC report released Tuesday, ER visits for opioid overdose increased more in urban areas than they did in rural areas, a trend that may signal an increase in illicit street drugs as opposed to prescription painkillers.

"We have talked in the past about the rural areas being hard hit by the epidemic. We know that prescribing patterns for opioids have been high in some rural areas," Schuchat said.

The federal report comes as states have been trying to curb the flow of prescription painkillers.

Under state law, doctors are required to check a prescription drug monitoring database to see if a patient is getting large amounts of opioids from different doctors. All states in the U.S. now have such a database.

"Even with the declines we’ve seen in the past few years, (opioid prescriptions) are still three times higher in the United States than in Europe. But on top of that, the heroin and other illicit drug supply has gotten even more dangerous than it used to be," said Schuchat.

Research shows people who have overdosed once are likely to do so again, making the ER a gateway for connecting people with treatment, Schuchat said.

"We want there to be warm handoffs in the emergency department between resuscitation or saving a life and addressing the longer term needs for that individual and their support system," Schuchat said. "So we think emergency rooms are essential hubs in this fast moving epidemic."

Emergency departments at SSM Health St. Mary’s in both Madison and Sun Prairie started a program where people who overdose are encouraged to seek drug treatment.

"Our coaches who work on the (ED2Recovery) program have the shared experience of having woken up in an emergency room after an overdose so they know that fear and anxiety and scariness. Also the ambivalence, 'Is this going to work for me? Nobody understands me,'" said Tanya Kraege, recovery coach supervisor with Safe Communities of Madison-Dane County which started the ED2Recovery Program in 2016.

The ED2Recovery Program has also expanded to UW Hospital and there are efforts to expand it statewide using federal grant money.