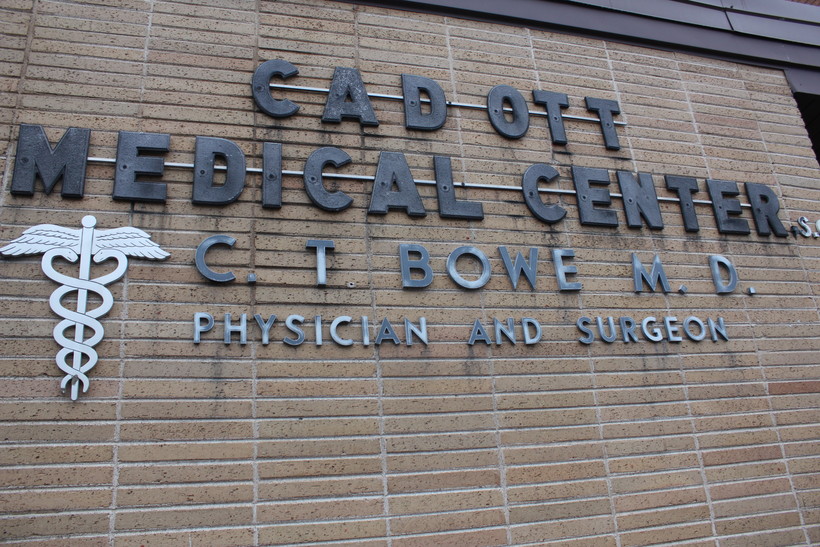 The Cadott Medical Center was visited by agents with the U.S. Drug Enforcement Administration Wednesday Jan. 18.

Federal agents with the Drug Enforcement Administration raided a small clinic in Chippewa County last week that specialized in treating chronic pain and addiction. Some in the community are applauding the DEA for shutting down a suspected pill-mill. Others are worried the loss of the clinic is cutting off a source of life-saving medicine keeping patients from using illegal drugs.

Just after 8:30 a.m. Jan. 18, agents with the DEA entered the waiting room at the Cadott Medical Center along with Chippewa County Sheriff deputies and Cadott Police. Ann Bell, who has worked at the clinic for more than 50 years, said she was told they wanted to see the owner and sole physician, 83-year-old Dr. Clifford T. Bowe.

The DEA Milwaukee field office's Bob Bell, the U.S. Department of Justice special agent in charge of the investigation, confirmed officers executed a federal inspection warrant, which is used to check records at hospitals and clinics prescribing narcotic painkillers. Neither the DEA or U.S. Attorney’s Office for Wisconsin’s Western District would comment further.

Bowe, the clinic's doctor, said among the things agents found were samples of drugs he didn’t realize were restricted and blank prescriptions he’d already signed to save time, which turned out to be illegal. Both instances, he said, where honest mistakes. Bowe said he signed away his ability to prescribe Schedule II through Schedule V narcotic painkillers and the officers left.

This wasn’t the first scrutiny of the Cadott Medical Center. In 2012, Bowe was reprimanded and fined by the Wisconsin Medical Examining Board for failing to properly diagnose chronic pain and prescribing narcotics without proper justification. The state has three open investigations into his practice. In Search Of Relief

Around 200 patients used the Cadott Medical Center up until last week. Bowe said some suffered from chronic pain, others from addiction or a combination of both. He said many had high tolerances for opioids, which meant treating them required higher dosages other doctors were afraid to prescribe.

"So, they came to see me, and that’s how I got this kind of high-risk population that when somebody looks at it, it looks like I’m overprescribing but I’ve tried to have my prescriptions well thought out," Bowe said. "I know what the end points of toxicity are and I monitor them closely, give them Narcan (a drug used to halt overdoses) for injection if they get too much. I’d instruct their relatives when they’re sleeping if they are on opioids, to monitor their respirations, etc."

Bowe said some of his patients traveled 100 miles each way to see him. Now that the clinic is closed, the phone has been ringing off the hook with anxious patients seeking help. Office staff such as Ann Bell have been working to transfer medical records to other doctors in hopes their former patients can get treatment. Fritz Cromwell sits at his home in rural Blaire, Wisconsin. As a former patient at the Cadott Medical Center, Cromwell said if he didn’t cut his pills in half, his supply of methadone would run out Tuesday, Feb. 7, now that the clinic is closed. Rich Kremer/WPR

Fritz Cromwell of Blair, who is in his 70s, is afraid of what comes next. If he can’t get a doctor to refill his twice-daily 10-milligram methadone prescription, he’ll break out in sweats, severe nausea and diarrhea.

Cromwell’s pain comes from a fall he said left him with steel rods in his spine and neck. A sequence of scars running up his back mark where vertebrae were reconstructed. Cromwell said he used illegal drugs such as heroin and crack to dull the pain. After suffering a heart attack 16 years ago, he wound up at the L.E. Phillips Libertas Treatment Center in Chippewa Falls, where he said he met Bowe.

"I guess I gave my life to Dr. Bowe, and God, more or less, and he was like a father to me," said Cromwell. He said the methadone from the doctor got him off street drugs, and he’ll fight to stay clean.

But while some former patients of the Cadott Medical Center saw Bowe and his prescriptions as life savers, others outside the clinic saw something else.

Sue, who asked not to have her real name published, has fought to shut down Bowe for years. She's afraid local drug dealers, who she said are using the clinic as a way to get pills, may think she had something to do with its closure and target her family. Last year, a pharmacy next door to the clinic in the village of 1,400 was robbed at gunpoint twice.

"For the addict community he was a huge source, and I don’t know if he believed it himself. I think he trusted people too much and the community could not believe that he could do that to people," Sue said.

She said a close relative became a patient of Bowe in 2008 after an injury. But within months, Sue said, she realized they were abusing medication and becoming addicted. Sue said she offered proof to Bowe that his patient was doctor shopping and he dropped the patient. Three years later that relative left the state and four children behind.

Last year the Centers for Disease Control and Prevention issued new guidelines on prescribing opioid painkillers. Doctors are encouraged to avoid prescribing them if possible and to use lower dosages in cases of acute pain. While the guidelines have been welcomed, the American Academy of Family Physicians is still concerned some patients could be left in pain.

At the University of Wisconsin Pain Clinic, medical director Dr. Alaa Abd-Elsayed said they’re using alternatives to opioids such as anti-depressants, anti-seizure medications and pumps that deliver micro-sized doses of morphine to the spine to treat chronic pain and urging other pain centers to do the same.

"We are really working very well on weaning our patients off of opioids while treating their pain very effectively and getting better outcomes, and now we’re trying to expand this experience to the whole state of Wisconsin through other pain programs, through education and through establishment of e-consults," said Abd-Elsayed.

Still, for many of the patients who relied on the Cadott Medical Center, the immediate future remains less clear.