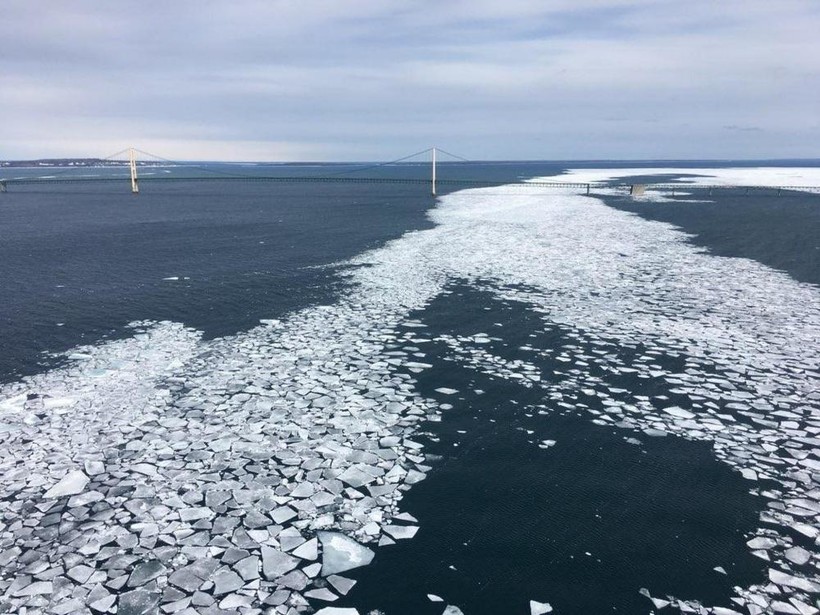 Enbridge has temporarily shut down Line 5 due to a power outage at the company's Superior terminal and adverse weather conditions in the Straits of Mackinac shown above.

Enbridge Officials: Storm Prompts Shut Down 'Out Of An Abundance Of Caution'
By Danielle Kaeding
Share:

Enbridge Energy has shut down operation of the Line 5 underwater pipeline due to the spring storm that has canceled hundreds of flights and caused dangerous travel conditions in the Midwest. Line 5 carries up to 540,000 barrels of natural gas and oil per day from Superior to Sarnia, Ontario.

In a statement Sunday, Enbridge spokesman Ryan Duffy said the line is temporarily out of service due to a power outage at the company’s Superior terminal. Line 5 will be shut down until weather conditions improve in the Straits of Mackinac, where waves as high as 12 feet have been reported. Enbridge hopes to restart operations as soon as possible.

"We understand the sensitive environment in which Line 5 operates. The Great Lakes are a treasure that must be protected," Duffy wrote. "We are continuing to monitor the conditions and provide updates to the state (of Michigan), Coast Guard, and PHMSA (Pipeline and Hazardous Materials Safety Administration)."

Michigan officials and lawmakers have called on Enbridge to take precautionary measures to protect the Great Lakes in light of the storm. They also have voiced concern over vessel activity that is suspected of denting Line 5 and causing a recent mineral oil spill from transmission lines.

Enbridge crews were working to restore power to areas of the Superior terminal Sunday evening. All other lines remain in operation, said Jennifer Smith, community engagement manager for Enbridge.