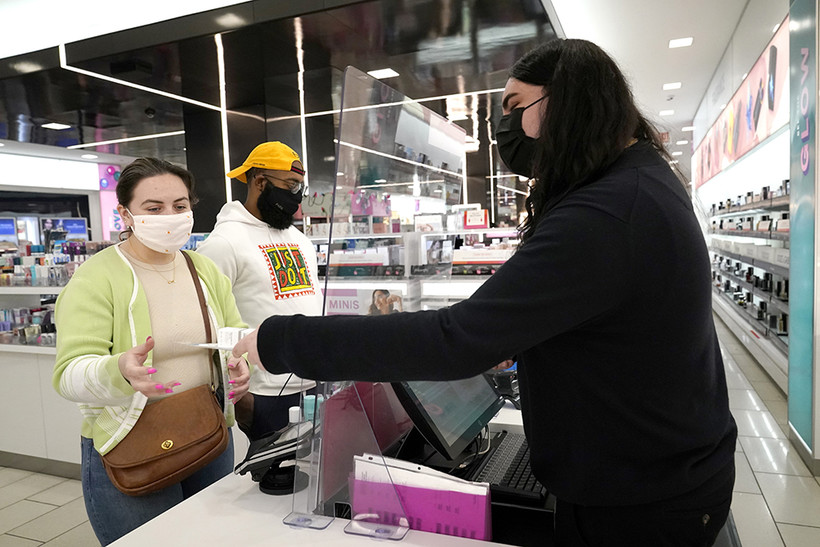 Cashier Druhan Parker, right, works behind a plexiglass shield Thursday, Nov. 19, 2020, as he checks out shoppers Cassie Howard, left, and Paris Black at an in Chicago. Charles Rex Arbogast/AP Photo

'Work Won't Love You Back' Profiles Employees Who Invest Years Into A Job With Little In Return
By Elizabeth Dohms-Harter
Share:

If there's a way to sum up journalist Sarah Jaffe's new 432-page book about our relationships to work, it's that employees deserve much more than what they're getting.

In an early chapter of the book "Work Won't Love You Back: How Devotion to Our Jobs Keeps Us Exploited, Exhausted and Alone," Jaffe profiles Ann Marie Reinhart, a mother who spent 30 years in retail at Toys R Us, and then went through what felt like the seven stages of grief after the company went bankrupt. She lost her pension, too.

"You give your life to this thing and then it expects you to be grateful to have given your life to it," Jaffe said.

Stories like Reinhart's are scattered all throughout the book, in all different types of industries. Jaffe talked through some of those stories and how our relationship to work has changed over the decades in a conversation with Rob Ferrett of WPR's "Central Time."

Rob Ferrett: You contrast the expectation that we could find fulfillment in our work with the norm for working people about 100 years ago in the Ford automotive plants. What did that look like in terms of worker expectations?

Sarah Jaffe: The thing that it looked like was that nobody much cared about workers feelings back then, right? It was not actually that important — if you were working on an assembly line at a Ford plant or a General Motors plant, if you were smiling, frowning, whatever mood you were in that day — as long as you did your assigned role on the assembly line.

So the shift away from that kind of work coincides, of course, with the rise of other kinds of work in which emotional investment and involvement is a much bigger part of the job — talking about health care work but also retail (and) other service jobs.

So what the new work ethic now looks like is one that increasingly tells us that we should get more fulfillment from our job, we should be more emotionally involved with our job. And that has also, perhaps unsurprisingly, come along with declining wages, stagnation and misery for working people.

RF: Yeah, that's the other half of the compromise there — that working on an assembly line isn't fun, but we're going to pay you enough and cut your hours enough that you can look forward to the time and money you can enjoy afterward. Have we lost that side of the compromise?

What we've gotten, instead of security, is all of these promises of fulfillment and excitement, and what excitement means is that we're all freelancers — we don't know where our next paycheck is coming from.

RF: Another thread you follow in the book comes from the idea of "women's work" and women as homemakers and child raisers, and then applying it to treating women like caregivers when they come to the workplace.

SJ: When American public schools first got started, there was a big debate over how to pay for it. Paying a bunch of people to educate everybody's kids is expensive. Somebody came up with the idea of hiring women. Women love kids, right? Women are good at taking care of kids. It's basically what they're doing in the home anyway.

And since we assumed at that point in history that women would be married and that their husband would be paying the bills or before they got married that they would still be living with a father who paid the bills, they didn't really need to have a sustainable wage.

And that expectation is really still baked into what we expect of teachers.

And if you look at, right now, the ongoing struggle over reopening schools and pushing teachers to go back into the classroom before everybody's been vaccinated, there's an expectation that teachers are just going to be naturally caring and self-sacrificing. You see people expecting them to just be willing to get COVID and potentially die in order to continue to spend time face-to-face with children.

Work Won't Love You Back: How Devotion to Our Jobs Keeps Us Exploited, Exhausted, and Alone

Work Won't Love You Back: How Devotion to Our Jobs Keeps Us Exploited, Exhausted, and Alone