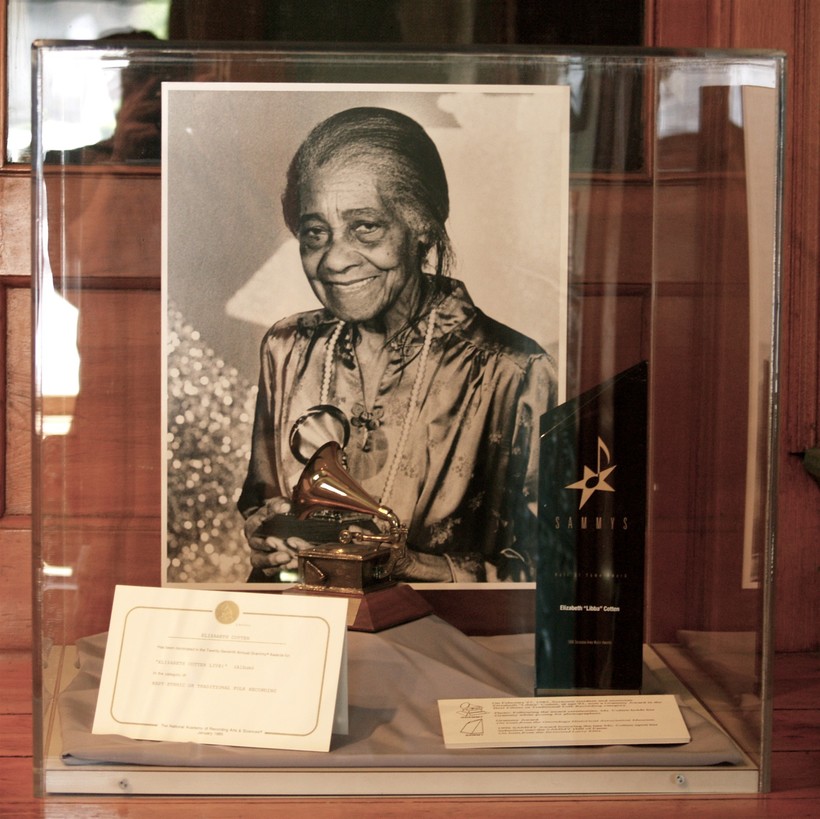 The Folk Musician Wrote Her Most Beloved Song At 12 Years Old And Won A Grammy At 90 Years Old
By Dan Robinson
Share:

Years ago, a friend of mine, Skip Jones, taught me the song "Freight Train." He added that he learned the song from Elizabeth Cotten, who wrote it. At the time I thought, 'Oh, nice ... I like the song and it’s always good to learn a song from the person who created it.' Little did I know then that Elizabeth Cotten was an incredibly influential musician, whose work, including "Freight Train," would be the inspiration for countless musicians that I enjoyed.

Elizabeth Cotten (née Nevills,) or "Libba" as she was sometimes known, was born in North Carolina and lived from 1895-1987, performing music into her 80s and winning a Grammy at the age of 90. She wrote "Freight Train," probably her best-known composition, when she was 11 or 12 years old, so her musical career spanned eight decades.

Cotten began playing banjo as a child, then picked up the guitar which was purchased with money she earned as a housekeeper. Self-taught and left-handed, she played guitar "upside down" from the traditional right-handed position and developed her own style of playing that was dubbed, "Cotten style" or "Cotten picking."

She married Frank Cotten at the age of 15 and together they had one daughter, Lily. She stopped playing for a long time, and didn’t return to her music until many years later when she worked for the Seeger family.

Yep, that musical Seeger family. She was a maid and helped take care of the children of Charles Seeger and Ruth Crawford Seeger, which included Mike and Peggy Seeger. Pete Seeger was their older brother from a previous marriage of Charles'.

Mike Seeger started recording Cotten, and by 1958, at the age of 62, Libba had released her first album, "Elizabeth Cotten: Folk Songs and Instrumentals with Guitar" on the Folkways label, since reissued as "Freight Train and Other North Carolina Folk Songs" on the Smithsonian Folkways label in 1989.

Among her many awards and recognitions were the National Folk 1972 Burl Ives Award for her contribution to American folk music, a National Heritage Fellowship by the National Endowment for the Arts, and recognition by the Smithsonian Institution as a "living treasure" and a "Master of American folk music." Her album, "Elizabeth Cotten Live" was awarded a Grammy for the Best ethnic or traditional folk recording in 1985 when she was 90 years old.

Her influence on American folk music, song writing, and guitar playing is wide and deep. For example, Bob Dylan and the Grateful Dead had well-known covers of her song, "Oh Babe, It Ain’t No Lie." Here’s Cotten performing the song and sharing the story behind it.

And here’s the Grateful Dead’s version of the song in 1980.

A little more recent, Rhiannon Giddens recorded a cover of Cotten’s song, "Shake Sugaree" on her debut solo album, "Tomorrow is My Turn." Here Giddens performs the song live in 2015, with Hubby Jenkins on guitar.

Cotten’s guitar playing continues to influence guitarist today. Here’s the instrumental "Washington Blues," which she wrote when she lived in the city, along with the song, "I’m Going Away."

To close things out, I encourage you to read the Smithsonian "Master of American folk music" article, mentioned above. The piece includes some wonderful video footage of Cotten performing "Freight Train" in the Seeger home in 1957. Enjoy!