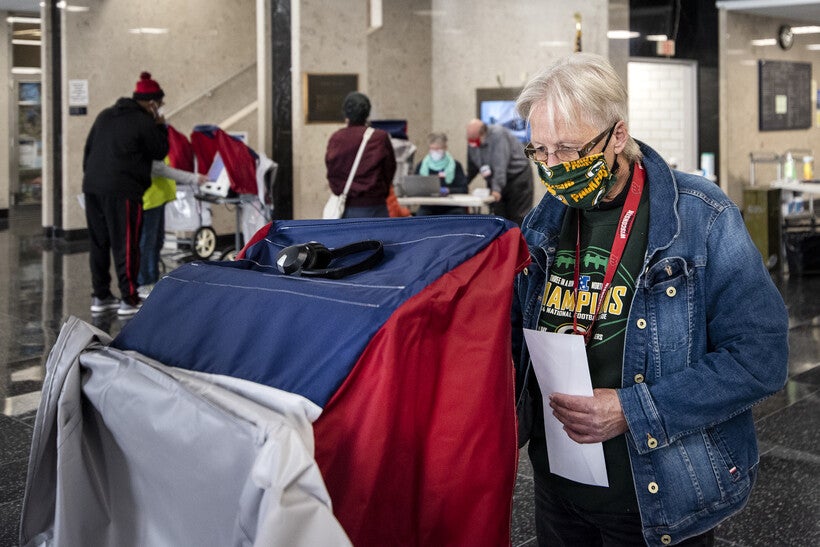 As in-person early voting continues in Wisconsin and Election Day nears, the head of the Wisconsin Elections Commission confirmed Thursday that Wisconsin voters will not be required to wear masks at polling places, but that election workers and poll watchers may be required to do so.

According to Elections Commission head Meagan Wolfe, local election officials can’t require voters to wear masks in polling places because such a requirement would constitute setting a new "qualification" for voting. Under the state constitution, only the state Legislature can set voting qualifications.

Those qualifications include things like how long a voter must live somewhere before being able to register to vote there, or whether people serving probation or parole for a felony sentence are able to vote.

However, Wolfe said election officials do have the authority to require mask wearing for some people at polling places.

"For poll workers and for observers, they can be required to wear masks in those roles," Wolfe said on a Thursday call with reporters.

Last month, a La Crosse poll worker sued Gov. Tony Evers and La Crosse City Clerk Teri Lehrke, claiming he was not allowed to work at a polling place for August’s partisan primary election because he wouldn’t wear a mask, citing a medical condition. The case is ongoing.

Wolfe’s guidance on Thursday was consistent with a July memo from the Wisconsin Elections Commission to clerks across the state.

"If necessary, poll workers who refuse to follow procedures and instructions provided by the clerk or chief election inspector would be neglecting their official duties and may be removed from their positions," the memo read.

The commission also noted in that memo that it has provided election officials across the state with enough face masks for all poll workers involved in the August and November elections.

Poll watchers — which may be out in greater numbers this year, following a call from President Donald Trump — may also be required to wear masks.

"Commission staff believe municipalities can regulate conduct on their property and require masks as long as it does not interfere with the right to vote," the July memo from the Elections Commission read. "Additionally, inspectors have the authority to preserve order and issue lawful commands or orders. They may also remove individuals for disruptive behavior or failure to comply with such lawful orders."

UW Board of Regents identifies 2 finalists for UW System president
Judge rules absentee ballot drop boxes not allowed under Wisconsin law
6 people have been injured in a mass shooting in Oregon
'What we got is what we got': Wisconsin grocery store owners say worker shortage is making it harder to keep items on shelves
In-person visits suspended at Wisconsin prisons as COVID-19 cases triple among inmates in 1 week