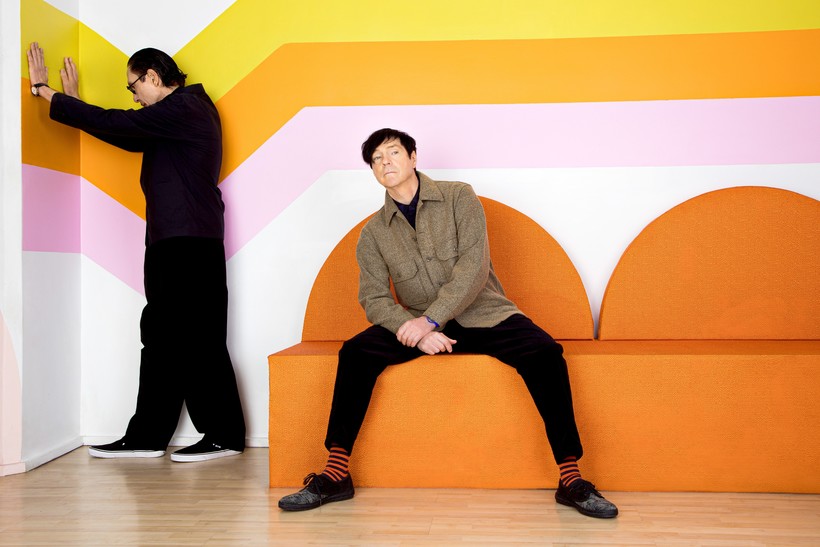 Ron And Russell Mael Are Still Breaking New Ground And Ahead Of The Curve
By Doug Gordon
Share:

Writer and director Edgar Wright's movie credits include the hit zombie comedy, "Shaun of the Dead" and the action movie, "Baby Driver". He can now add the documentary, "The Sparks Brothers," to his filmography.

"The Sparks Brothers" explores the 50-year career of the Mael brothers, Ron and Russell, who are collectively known as Sparks. Over the past half century, Sparks have delved into several diverse music genres, including art-pop, new-wave synth pop, and electronic dance music. Their fans include comedian Patton Oswalt, actor Jason Schwartzman, and the musicians Beck and Flea.

"Seeing Sparks on TV that young, they're quite diverting prospects because I knew then that they weren't really like the other bands," Wright told WPR's "BETA."

Wright liked the music, even if he didn't' understand the lyrics at 5 years old. Since then, Sparks have kept popping up in Wright's life.

"I was just kind of confounded by them and thought that their trajectory as a band was like no other," he said.

Then the thought occurred to him that somebody has got to do a documentary about Sparks.

"I think I kept saying it aloud until one of my friends called me on it and said, 'Why don't you make the documentary on Sparks?'"

Sparks' first big hit was "This Town Ain't Big Enough for Both of Us." It went to No. 2 on the United Kingdom singles chart in 1974. What is this song actually about?

"The lyrics are sort of to be decoded a bit, kind of (like) Chaucer poems, where you have to kind of read them and figure out exactly what's being said," Wright explained.

"And so to me, the song is about the anxiety of a young man who wants to get a date in a town where there are too many men and not enough women," he continued. "Then I think his anxiety explodes into these kind of like cliffhangers from movies — like bombs dropping, and cannibals attacking, and war breaking out. And I guess the idea is that it's eventually going to end in bloodshed that two men are going to fight over one girl."

The Mael brothers have reinvented themselves many times over the past 50 years. Wright said that this genre-hopping has definitely had an impact on Sparks' career.

"Because they're naturally quite restless, and they're always moving on to something new, it sometimes means that they haven't enjoyed the spoils of what they've done, or by the time that that music is popular, they've already moved onto something else," Wright said. "If you go ahead, breaking new ground, and you're so ahead of the pack, you're also kind of on your own. And that's a great thing in terms of being the explorers. But it's sort of the road less traveled."

Besides breaking new ground with their music, Sparks push the envelope with Ron's lyrics. They often take the form of surreal short stories featuring twist endings.

"Growing up with their songs, I sort of equated them to Monty Python albums," Wright said. "It's not like I fully understood the lyrics to all Sparks songs in the same way. And I didn't fully understand all the references in a Monty Python sketch, but it made me want to be smarter. So I think in a strange way, one of the reasons that the band have endured is because there's a lot to unpack."

One of the best examples of Ron's witty lyrics is the song, "I Predict." The ending could be the most brilliant song ending in the history of rock 'n' roll.

How have Ron and Russell influenced Wright's own career as a writer and director? That's not entirely clear yet, Wright said.

"I don't know how they have so far, but in a weird way, I think that they're kind of something to aspire to," Wright said. "I think about it in the same breath as something like George Miller making 'Mad Max: Fury Road' at age 71."

"The fact that Ron and Russell are doing what they do now, releasing great albums and writing a movie musical ("Annette") for Leos Carax in their early 70s — anybody who's a creative artist in any form would hope to be doing some of their best work in their 70s," he continued. "It's the dream, isn't it? So I think if anything, it's more making the documentary has kind of shown me the lesson in terms of sticking to your artistic beliefs is the only way forward through thick and thin."