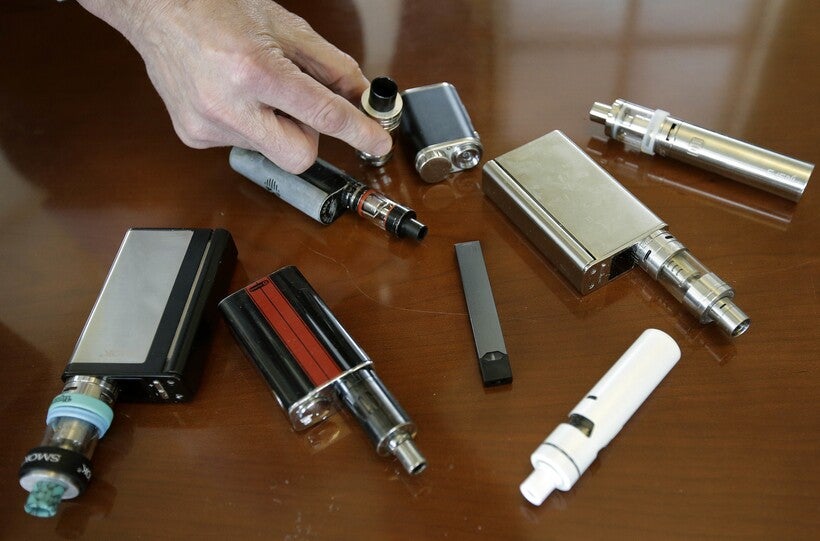 In this Tuesday, April 10, 2018 photo, a high school principal displays vaping devices that were confiscated from students at the school in Massachusetts. On Wednesday, Aug. 14, 2019, the Vapor Technology Association filed a lawsuit against the U.S. government to delay a review of electronic cigarettes. Steven Senne/AP Photo

CATCH My Breath Diversion Program Aims To Educate Kids On Dangers Of E-Cigarettes Rather Than Offering Citations
By Rich Kremer
Share:

Students caught using electronic cigarettes and other vaping devices in Eau Claire public schools will have a chance to avoid citations through a court diversion program educating them on the dangers of the devices.

A collaboration between the Eau Claire Area School District, Eau Claire Police Department and the Eau Claire County Restorative Justice Program is aiming to keep kids out of court after being caught vaping in school. The initiative is called CATCH My Breath and provides a single, two-hour class session explaining the dangers of using e-cigarettes. Eau Claire County restorative justice executive director Tim Wavrunek told WPR the project is a reaction to what the school district is calling an epidemic of vaping among students.

"They were just seeing a huge increase in the numbers of vaping-related offenses on school grounds last school year and they were just handling it like a typical tobacco violation," said Wavrunek. "But the sheer volume of referrals that were made to school resource officers to address it were way outpacing traditional tobacco."

Wavrunek said currently a citation for using tobacco or vaping devices containing nicotine on school property is $50. If students volunteer for the CATCH My Breath program, they avoid a citation and pay a $25 fee for the classes. He said if they don’t complete the classes the citation and fine are imposed. Wavrunek said it’s the same approach that Eau Claire County’s various drug and treatment courts use to keep offenders out of the criminal justice system.

"We’re just applying that concept to the vaping issue just to see if we can make some inroads because what everybody was doing isn’t working and it continues to grow," said Wavrunek.

The CATCH My Breath program is a national initiative developed by the Michael & Susan Dell Center for Healthy Living at the University of Texas Health Science Center at Houston. The organization says the goal is to prevent the use of e-cigarettes by students in middle school grades. Wavrunek said there are different courses for high school students.

The classes include "active student-centered learning facilitated by peer leaders," according to the program's website, with an objective of helping students understand "deceptive advertising techniques, developing and practiving socially acceptable refusal skills and practicing peer modeling techniques in small groups."

In an interview with WPR, Wisconsin Association of School Boards government affairs director Dan Rossmiller said the Eau Claire initiative is the first of it’s kind that he’s heard about in the state.

"The Eau Claire approach is an interesting one because it seems to take a public health approach trying to educate students about the health effects of vaping, much of the long-term effects, which are not well understood,” Rossmiller said.

"And then the consequences for violating the code of conduct will run the gamut, different districts having different ranges of severity as a punishment could be all the way from a warning on first offense to a zero-tolerance policy. Although, I think that’s probably fairly rare," said Rossmiller.

In April, the Wisconsin Department of Health Services issued a public health advisory on the rise of vaping among children in public schools. The agency said that e-ciggarette use among high school students increased 154 percent between 2014 and 2018 and that 1 out of every 5 students reported vaping. The DHS advisory also noted federal data suggesting nicotine exposure during adolescence can harm developing brains.

In response to concerns over youth vaping, a bipartisan group of lawmakers has introduced a bill that would raise the legal smoking age from 18 to 21. The age limit would also apply to e-cigarettes.

State Sen. Lena Taylor, D-Milwaukee, is a cosponsor of the bill being referred to as T21. She told WPR that the bill is responding to concerns of school districts, health professionals and law enforcement around the state about a vaping epidemic. She said while the choice to smoke or use e-cigarettes is a personal one, the state as a whole has a responsibility to act when kids are involved.

"I believe that when communities as a whole are paying the cost for the ramifications or the consequences of smoking, we get a say and whether or not that’s something that happens for our young people," said Taylor.

"So, in the end we know who they’re marketing to," said Taylor. "We know that there’s a cost to that. And in the end we have to determine whether or not we want to continue to pay that cost or if we want to be on the side of trying to correct the error."

The T21 bill has been referred to the state Senate’s Committee on Health and Human Services.