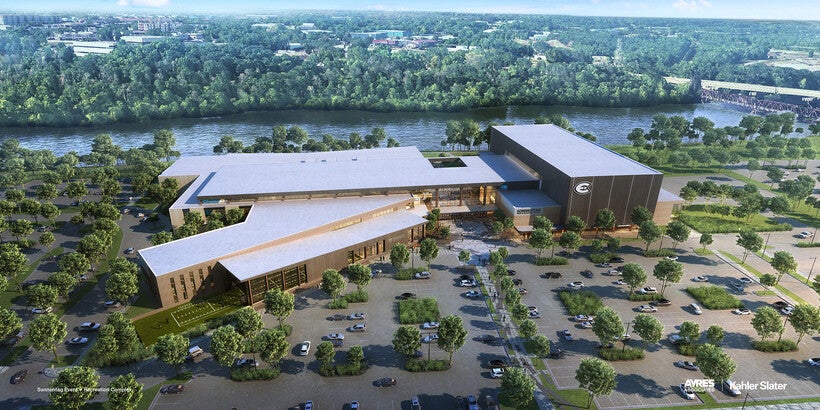 A rendering of the Sonnentag Event and Recreation Complex in Eau Claire. Image courtesy of UW-Eau Claire

The city of Eau Claire will spend upwards of $7 million toward a sports and events complex slated to break ground this summer. The commitment is the second multi-million dollar investment by the city into major performance spaces within the last eight years.

The Eau Claire City Council signed a letter of intent Tuesday to contribute between $6 million and $7 million toward what is called the Sonnentag Event and Recreation Complex. Work on the project began in 2014 when University of Wisconsin-Eau Claire alumni John and Carolyn Sonnentag donated $10 million worth of land along the Chippewa River to the UW-Eau Claire Foundation for a future sports and events center.

The foundation partnered with the Mayo Clinic Health System and local YMCA on plans to build a 130,000-square-foot major events center worth an estimated $100 million. But in December the YMCA withdrew its support for the Sonnentag complex leaving remaining partners to scale back designs.

"What the partnership does is it provides the opportunity to create a larger, major events center than what would simply meet the university's needs so it can also meet the community’s needs," Rindo said.

Eau Claire City Manager Dale Peters said the 5,100 capacity is important because feasibility studies indicate the facility will be able to draw larger musical acts and a wider range of youth sporting events.

"So, why do this?" asked Peters. "Basically, it would address a long-term need in the community. It’s an opportunity to merge limited resources together and it builds on the strengths and partnerships of collaboration that we have in the Eau Claire area."

Peters said economic feasibility studies suggest the center could bring in $625,000 in new annual hotel revenues and would add around $25 million in new taxable value for the city. He said currently the largest sporting and events center in the city is UW-Eau Claire's Zorn Arena, which seats 2,500 and was built in 1951. He said city planners have discussed replacing Zorn since 2007.

The city's letter of intent is just the first phase of the new partnership, said Peters. He said a formal agreement still must be signed by the parties. He said half of the city's multi-million dollar commitment will be paid through revenues from a tax incremental finance district, or TIF, which allows municipalities to pay back loans through increased property tax revenues generated by new development. Peters said the other half of the city’s funding would come through hotel room-tax revenues.

"It's a very exciting opportunity for the Chippewa Valley to be able to engage in a collaborative partnership to be able to provide an events center that not only meets the needs of the university but addresses a long term need for the community," said Peters.

The city's commitment to the Sonnentag complex comes just six years after the city offered $11 million in funding toward a $45 million performing arts center project called the Pablo Center at the Confluence, which opened its doors in 2018.