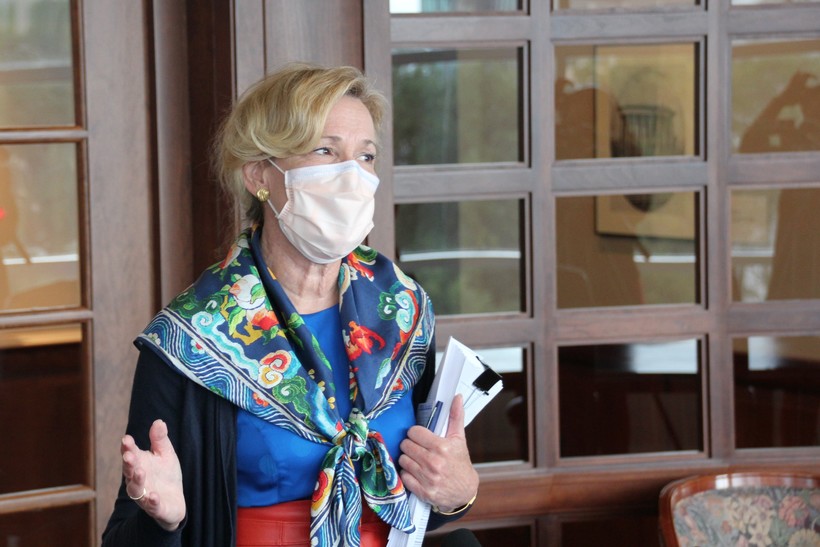 White House coronavirus coordinator Deborah Birx used a stop in Madison Monday to urge college students who have been in large crowds to get tested for COVID-19, and to avoid bringing it home to friends and family over the Labor Day weekend.

Birx, who joined President Donald Trump at daily coronavirus briefings earlier in the pandemic, also praised the effectiveness of face masks and social distancing in slowing the spread of COVID-19.

Her comments come just days before University of Wisconsin campuses are scheduled to resume in-person classes after sending students home in the spring to complete their semesters virtually.

"Please help us protect one another," Birx said. "If you have gone to a large gathering, if you have gone to, let's say, a fraternity house and there is a party and people didn't have mask on, (it's) more than likely you became exposed to the virus. Please go get tested. Please do not go home and spread the virus to your mom or your dad or your aunts and your uncles over Labor Day weekend."

Birx said federal health officials had been worried about COVID-19 outbreaks in the Midwest after it spread rapidly in the South over the summer. She said part of the reason the coronavirus spread there so rapidly is that many residents viewed it as an urban problem that would not affect them.

"Rural towns are not immune to this virus," Birx said. "This virus is highly transmittable. And whether you're in a small town in rural America or a big urban city, we have seen this virus come to you."

Birx noted that Wisconsin was seeing an uptick in COVID-19 cases in some rural counties.

She said southern states had reduced coronavirus cases through a variety of measures, including increased social distancing and decreased occupancy in restaurants.

"If we ever needed an evidence base of what these mitigation efforts can do when we work together, this is the evidence base," Birx said. "It's no longer theoretic. If we mitigate together as a community, we can stop the spread of this virus."

Birx said she had seen widespread acceptance of face masks in Madison, which implemented a local face mask mandate for indoor spaces before Gov. Tony Evers issued a statewide mandate on July 30. Ever's order is currently being challenged in court by the Wisconsin Institute for Law and Liberty on the grounds that he exceeded his authority when he declared the most recent public health emergency.

Birx did not comment on the specifics of Wisconsin's mandate, but said they'd been a major factor in preventing more widespread shutdowns.

"We have the ability now to protect each other and still have our personal freedoms of going out," Birx said. "It involves wearing a mask."

Birx also criticized an approach being pushed by another White House advisor, Scott Atlas, who is a neuroradiologist from Stanford’s conservative Hoover Institution. According to the Washington Post, Atlas has pushed Trump to fight COVID-19 by letting it spread quickly throughout the general population to achieve what's known as herd immunity.

"Your farmers out there, you know what happens with herd immunity," Birx wrote. "There are certain viruses for which there isn't a vaccine among herds. And you let it move through that herd and you accept a level of mortality of your piglets, of your ducks, your chickens, of your cows."

Birx said she was personally opposed to using the same approach with people.

"I don't think anyone in the United States, including the president, was willing to accept that level of mortality among the individuals of Americans that we know are at higher risk," Birx said.

Birx said the mortality rate among people over 70 had dropped dramatically, but remains at 7 percent.

"It's seven per 100 cases," Birx said. "Whose seven? Would that be your grandmother? My parents in a multigenerational household? So I think behind that number are true Americans that we have to protect."

Birx was in Madison as part of a multi-state tour. She said Wisconsin was the 24th state she had visited since June 30.