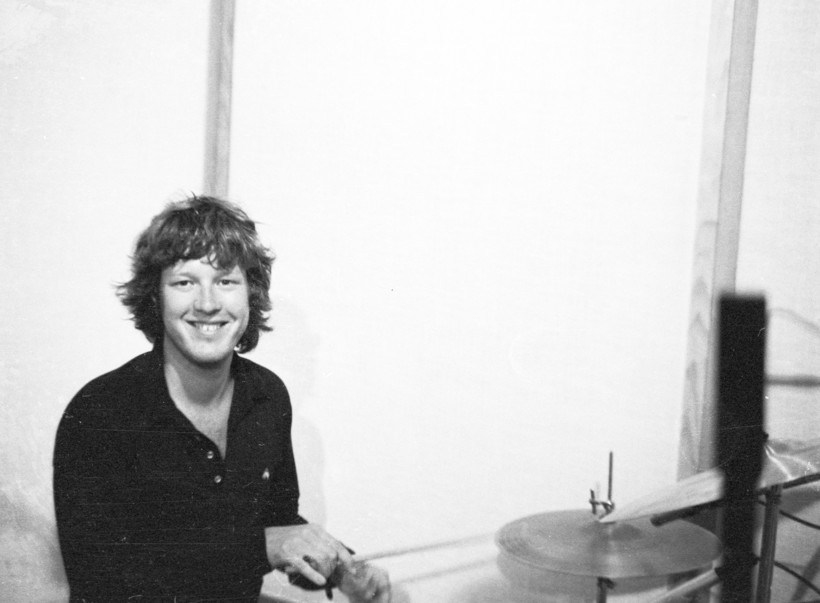 Talking Heads were a huge part of the New York punk scene during the late 1970s. The band stood out with its distinctive, frenetic brand of art pop. As they continued into the 1980s, the band's sound evolved into expansive funk and propulsive, polyrhythmic worldbeat.

Chris Frantz was there from the beginning. He was the drummer and his wife, Tina Weymouth, was the bass player. Frantz chronicles what it was like to be part of this iconic, influential, and creatively restless band in a memoir called "Remain in Love: Talking Heads, Tom Tom Club, Tina."

Frantz met Weymouth in an art class at the Rhode Island School of Design in the early '70s. "It was one of those love-at-first-sight things," he told WPR's "BETA."

Frantz was in a band called The Artistics along with David Byrne. They performed covers of garage band songs at dances and parties. One day, Frantz and Byrne decided that they would try to write an original song together.

"Next thing I knew, there was a knock on the door of our painting studio that Tina and I shared. It was David and he said, 'I've got the beginnings of the song I've written, which is loosely based or inspired by an Alice Cooper song.' He had the first verse and the chorus and he played this: 'I can't seem to face up to the facts/I'm tense and nervous and I can't relax.' And I thought, oh, that's really good. And then he sang the chorus: 'Psycho killer/Qu'est-ce que c'est/Fa-fa-fa-fa-fa-fa-fa-fa-fa."

Byrne asked Frantz and Weymouth to help him finish the song. Frantz thought that the lyrics for the bridge of the song should be in a foreign language. He pointed out that Weymouth's mother was French and Weymouth was fluent in French so why not have her write French lyrics for the middle eight? Byrne liked the idea since he already had the French words "Qu'est-ce que c'est" in the lyrics.

Weymouth sat down and wrote the French lyrics for the bridge of the song. The English translation is: "What I did that night/What she said that night/Realizing my hopes/I launched myself toward glory.'

"So, that's a very formal kind of psychotic statement," Frantz said. "I think she kind of nailed it. And then I wrote second and third verse, and Tina and I were brainstorming and we came up with the 'We are vain and we are blind' and 'I hate people when they're not polite.' And David liked that. And he wrote it down in his little notebook. So in the course of a period of about three hours, I think it was, we had written our first song and I thought, this is very promising. We should do more of this."

Talking Heads formed in New York City in 1975 with Byrne, Frantz and Weymouth joined by Milwaukee's Jerry Harrison on keyboards and guitar. "Psycho Killer" was the debut single from their debut album, "Talking Heads: 77."

In 1980, Talking Heads released their fourth studio album, "Remain in Light". It was produced by Brian Eno and marked a radical reinvention of the band's sound, filled with African polyrhythms, funk, and electronics. The band improvised together to create the songs, which presented special challenges for the rhythm section of Frantz and Weymouth.

"Our challenge was to create rhythm parts, drum and bass," Frantz recalled. "We didn't know where the choruses or verses or bridge sections were or anything like that. So we had to basically be like human loops. We would work out a part. We would practice and improvise until it reached our standards of excellence. And then we would record like eight minutes of that. And then David and Jerry would come out and build on that with guitars and keyboards. So the challenge was to have something that was rhythmically compelling and propel the songs forward."

A few years later, Byrne decided that he wanted to record a solo album. And Harrison said that if Byrne was making a solo album, he wanted to make one, too. Frantz and Weymouth figured that they would put together their own side project, which became Tom Tom Club. They recorded a song called "Genius of Love" which became a big hit on their self-titled debut album, released in 1981. It was a No. 1 hit on the Billboard Disco Top 80 chart.

"Our source of inspiration was a song called 'More Bounce to the Ounce' by Zapp & Roger, which had been produced by Bootsy Collins, from James Brown and Parliament Funkadelic. And we loved it. It had a slow tempo, so it was more funky. We didn't know it at the time that it was really good for rappers. We hadn't thought of that, but they figured it out. We started with bass and drums, as we had with 'Remain in Light'. And then we added the little keyboard part. Our keyboard skills were very rudimentary, but it worked."

Talking Heads broke up in 1991. The band was inducted into the Rock and Roll Hall of Fame in 2002.

"My proudest accomplishment is the fact that when I walk into the Stop & Shop supermarket and I hear 'Genius of Love' coming over the PA system, it still sounds hip. It sounds good. And I'm so glad it like makes people want to buy stuff," Frantz said. "It's not just 'Genius of Love.' It's also songs like 'Road to Nowhere' and even 'Psycho Killer.' Our legacy is a good one. We have a lot of good records and the fact that they still sound relevant and interesting, it's just a big bonus."