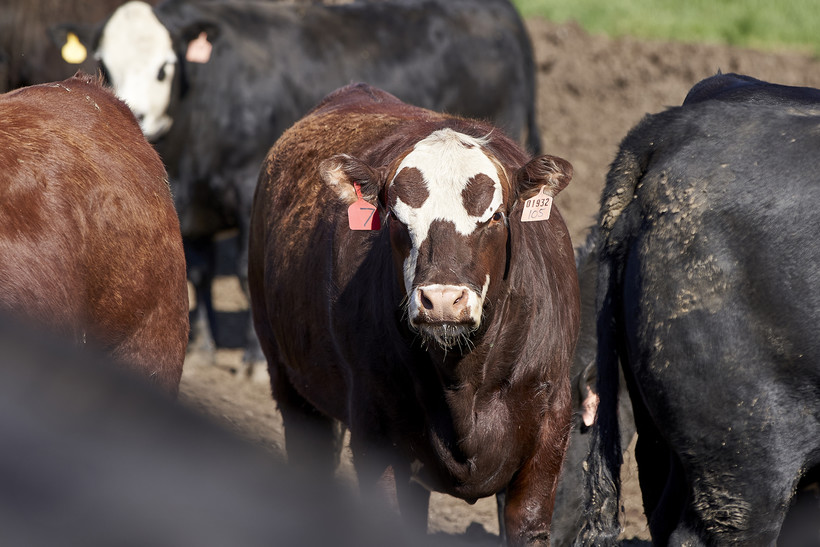 In this June 10, 2020 photo, cattle is seen at a feedlot in Columbus, Neb. Nati Harnik/AP Photo

Drought-affected ranchers are culling cows, which could mean new opportunity for growing beef industry in Wisconsin
By Hope Kirwan
Share:

Brady Zuck is a beef producer from Ladysmith and president of the Wisconsin Cattlemen's Association. He said Wisconsin livestock farmers sympathize with the many producers across the western United States who are struggling with a historic drought this year.

He said a lack of rainfall affects not only the pasture lands that cattle graze on during the growing season, but also the hay crops farmers feed animals through the winter.

"It’s very expensive to purchase enough feed to maintain your herd size. So rather than trying to spend all that money to buy the feed, producers will cull some animals just to decrease their stocking density or how many cattle they have to feed every day," Zuck said.

Jeff Swenson, meat and livestock specialist for the state Department of Agriculture, Trade and Consumer Protection, said market analysts now expect the U.S. to hit a record high beef cow culling rate for the year. He said it’s not just the older, less-profitable cows that farmers in Kansas and Oklahoma are culling.

"Ranchers aren't holding back young females to enter the herd. So those cattle are going into feedlots or are entering the food chain as well," he said.

He said that means they’ll have fewer calves born next year and the year after that, setting up a long road before producers are able to rebuild their herds.

Swenson said that sets up Wisconsin farmers, who haven’t experienced the same drought stress and increased culling, to gain from higher cattle prices heading into 2023.

"It does look like a profitable time and, you know, there are cows available for somebody that wants to buy them so they don't go into the food chain. Historically, Wisconsin has added cows during times of drought in the south and west," he said.

Zuck said he thinks Wisconsin is well positioned to step up to market demand. He said the number of beef producers in the state has grown significantly in recent years as more farms decide to leave the dairy industry.

"We've been actually for several years one of the top leading states in growth for beef cattle," he said. "I think with our abundant forage resources, good rainfall, silage corn that’s available here to feed cows throughout the winter, we have a lot of opportunities to grow our beef industry."

"Everyone sees the price of beef and thinks, 'Oh my gosh, you guys are just getting rich, right?' Well, keep in mind there's an input and output on everything," he said. "When you consider the fact that diesel has been over $4 for most of the summer, fertilizers that used to cost us $300 a ton now cost us $850 ... it's just catching us up towards the inflation on everything else that we buy to produce cattle."

Brenda Boetel, agricultural economist at the University of Wisconsin-River Falls, said producers will need to consider these higher costs, especially for additional feed, before they try to add to their herd. She said the biggest opportunity is for producers that are able to finish raising calves that they would have normally sold, what she called retained ownership.

"There is some potential, particularly if they have the feed to be able to keep that retained ownership, if they're going to hold them on, there's some potential to gain some profitability there," she said.

That’s because cattle prices haven’t seen a large increase yet. Boetel said the delay is from farmers selling cows they normally would have held on to, maintaining a supply large enough to meet the demand for now. But she said that's only delayed the price increase that will come from smaller supply and producers should see higher prices by next spring.