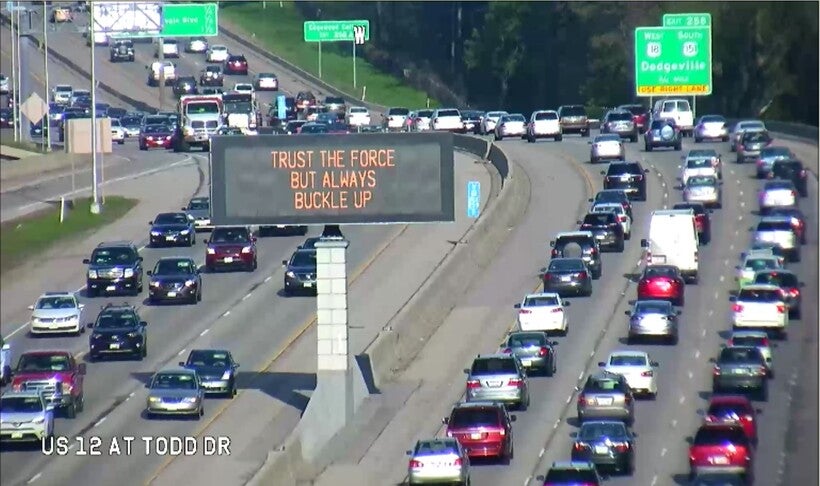 The Drive Behind The Electronic Messages You See On Wisconsin Highways

Some have said: "Huddle up before the big game plan a sober ride" or "Courteous driving is contagious."

These are a couple of the hundreds of public safety messages splashed on the electronic billboards over roadways across Wisconsin.

And recently WPR received a question from a listener, Marc Reisner from Madison, about these signs.

He asked: "What's the story behind the electronic signs you see on Wisconsin highways? Who writes the witty sayings about how to stay safe on the road?"

Marc's question is something I've have also wondered. I've seen the messages on the electronic billboards countless times and without fail, I always think, "Who comes up with these funny, but serious PSAs?"

I even look forward to seeing what message will appear on the boards during my commute to and from work. This one in particular had me chuckling and saying, "mmhmm":

When that person in front of you doesn't use their blinker...#ShowMeYourBlinker. Think of it as the first instant message! pic.twitter.com/6E8ZeK0lK5

So, knowing why I was interested in the signs, I called Marc to see why he was curious about the messages and what he thought about them. And what I learned is that Marc is sometimes a fan of them, but he can find them distracting.

"I was curious who is writing these because it seems like there's a different one every week, and often times, I'll see it from far away and I won't be able to quite see it and I'll try to see it when I'm closer, and it takes my eyes off the road," he said. "And often times, the purpose of them is they're saying, 'Keep your eyes on the road,' or 'Keep your eyes off your phone,' or 'Don't drink and drive,' but in the meantime, I'm reading this sign which is taking my eyes off the road."

This takes us to the Wisconsin Department of Transportation Traffic Management Center in downtown Milwaukee. It's here where DOT employees, in what's called the control room, use computer software to put up and take down the messages urging safe driving.

And it's here, in a conference room, where a team of DOT employees meet every two months to plan the upcoming so-called creatives for the digital billboards Marc and millions of others see. 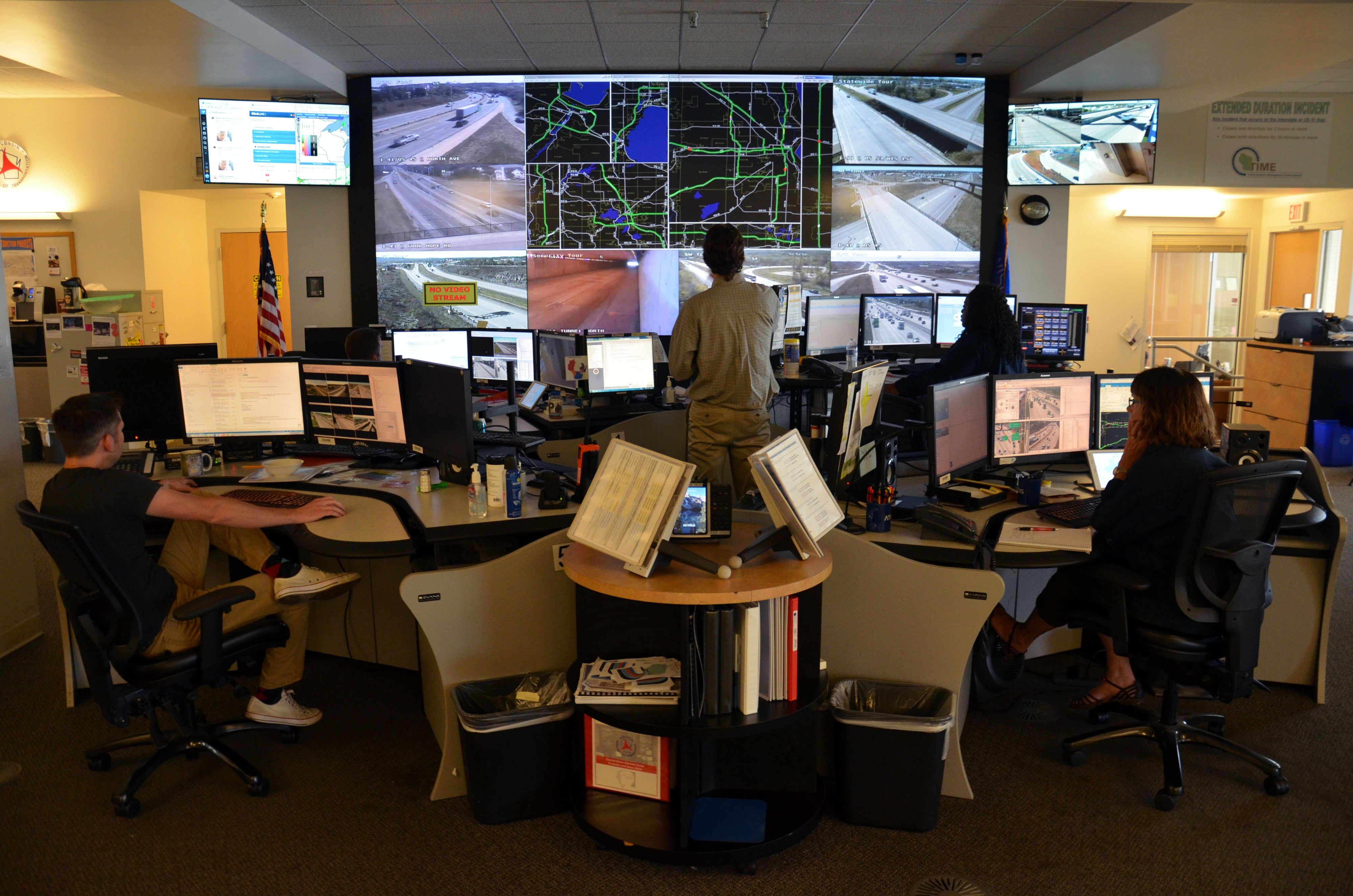 David Hunt, DOT communications manager, is leading February's meeting to map out the signs for March and April. He has a laptop in front of him with an open Microsoft Word document that lists all the messages the DOT has used since it began planning creatives for the digital boards in 2016.

The DOT has more than 100 messages in its arsenal and is constantly coming up with new ideas — people have even submitted ideas,  and feedback, through the state’s 511 website.

The goal is straightforward: improve safety on Wisconsin roads.

Hunt said because these messages appear on about 140 boards statewide, they have the ability to educate millions of people.

"We are very cognizant of the fact that millions of people are going to drive past the messages that go up on our boards, so we just want them to be as easily digested as possible," Hunt said. "And if it creates a little bit of conversation when you get back to the office by the water cooler, even better. If people are talking about highway safety, that is a home run for us."

The messages are pointed safety reminders and are sometimes tied to national law enforcement efforts — such as Click It or Ticket or Drive Sober or Get Pulled Over — sporting events, holidays and even daylight saving time.

They are taken down for urgent messages, such as road conditions or Amber and Silver Alerts

Not every message is going to be a slam dunk, and the team knows that, but they try to be in tune with current events and pop culture. 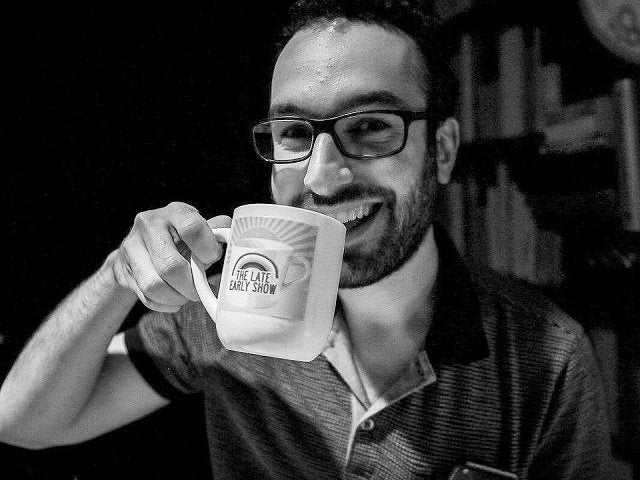 At the team's last meeting in February, they were brainstorming messages that would go up during the NCAA basketball tournament in March. Trying to play off tournament bracket pools to create a sober driving message, the group brainstormed two possible messages:

One challenge for the group is brevity. The messages can't be long. They're between 60 and 63 characters, including spaces. Far less than a tweet.

"We can't make it too complex that someone driving at 70 mph can't see that and absorb it as they drive by," Pierce said. "It can't be much longer than that for just the time they have to see it anyway."

The DOT doesn't want people to be using mental energy to read the sign when they have to focus on the road ahead.

"You want the message to ideally be simple and digestible to the point that nobody has to spend a whole lot of effort understanding it. In fact, zero effort understanding it is our target," Hunt said. "You want somebody to be able to see it, understand it without having to think too much more about it. So what we find is there is not really a hard and fast rule, but it's just generally shorter is better. Brevity is key."

So are these billboards effective?

"I think it triggers conversation, and from the conversation, because it's humorous or enlightening, and it then triggers the greater point of what message we're trying to get across," Clarke said. "So I do think they work."

Clarke said he has gone places and heard people talking about the messages.

"It's kind of fun to be the fly on the wall, so to speak, and hear what people think about the media messaging attempts that we're trying," Clarke said.

One data point Hunt and others like to point to is a 2016 a survey by the U.S. Department of Transportation Federal Highway Administration that showed nine out of 10 people thought the signs — formally called dynamic message signs, or DMS — were an effective way to deliver public safety information.

The state DOT also actively monitors the response on social media to the signs and the 511 website. At one point, a Reddit page even popped up about this summer message: Camp in the woods not the left lane. 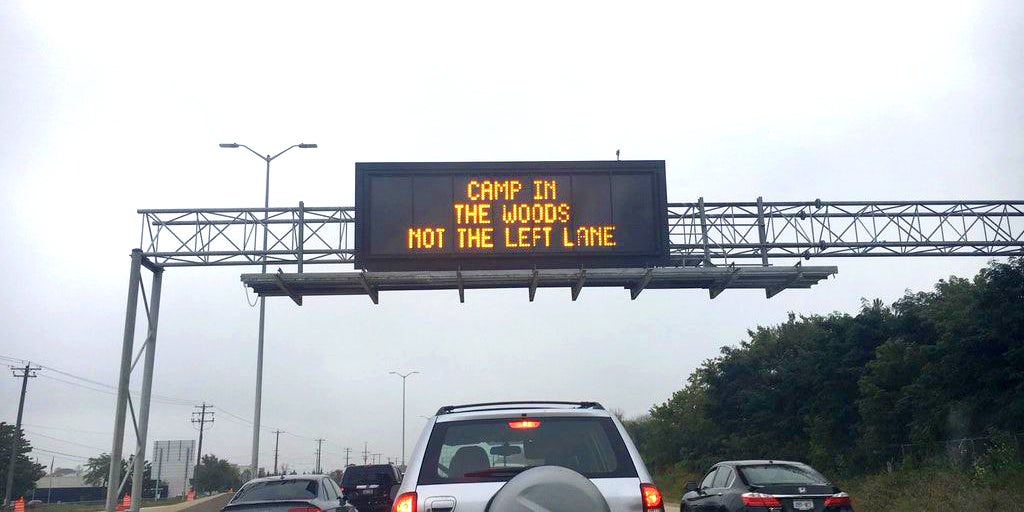 But what about them being distracting?

"If something was terribly distracting, we would hear about it because bad news does travel fast, and it's our responsibility to get it right. That's what we're here for. So, if we don't hear anything, that's actually good news," said Dan Schultz, a control room engineer and member of the team.

In 2013, the DOT began to sparingly put more creative safety messages on digital billboards after seeing other states do it, but they're not sure what state did it first, the group of stakeholders said after their February meeting.

In 2016, the committee of six to 10 people — from the State Patrol, and engineering and communication departments within the DOT — was formed and began to more carefully plan and form the more creative messages we see now.

The first message that came out of the committee was for the July Fourth holiday in 2016: Make the Fourth a blast not a bust drive sober.

Each message the team comes up with has to be approved by the DOT administration before hitting the big screen.

"Public safety is core to anything we do with our dynamic message system, and we try to use these messages to create that culture of safety, to constantly reinforce a culture of safety and driving in the state of Wisconsin," Hunt said.

After going to Milwaukee to talk to the DOT team, question-asker Marc and I hit the road to get his opinion on one of the new messages. This one was along the Beltline in Madison.

It was the night after the Oscars and traffic was normal for this time of day. As we neared the sign, Marc prepared to read the message.

"'No Oscar for best lead foot slow down,'" Marc read. "That's pretty good. I actually kind of like that one. It's relevant to something that happened yesterday. It's something that I think I could see my dad telling me," he continued with a laugh. "It's not too moralizing. It's just silly enough to where it's still enjoyable. 'No Oscar for best lead foot.' Yeah, that's pretty good." 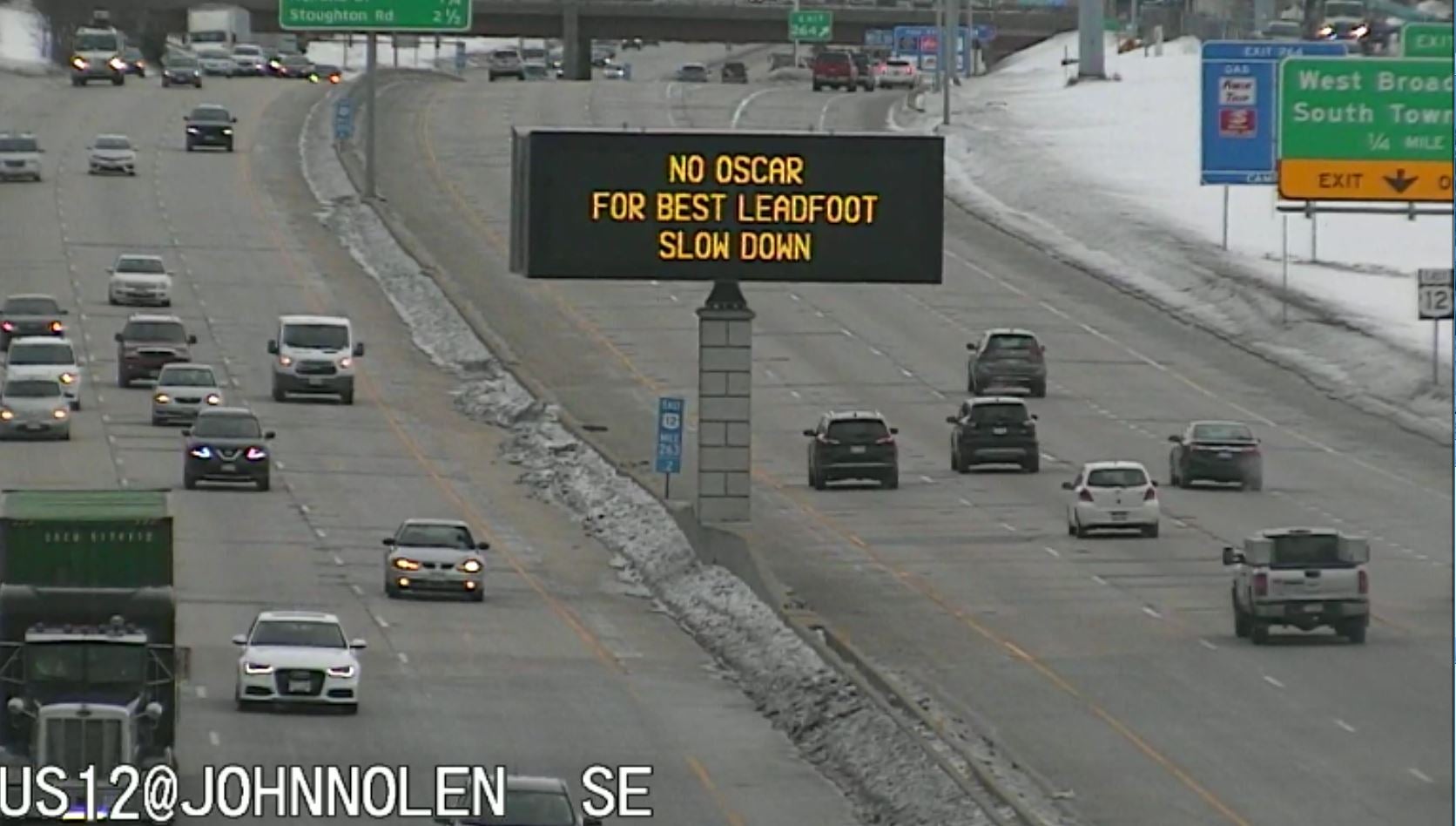