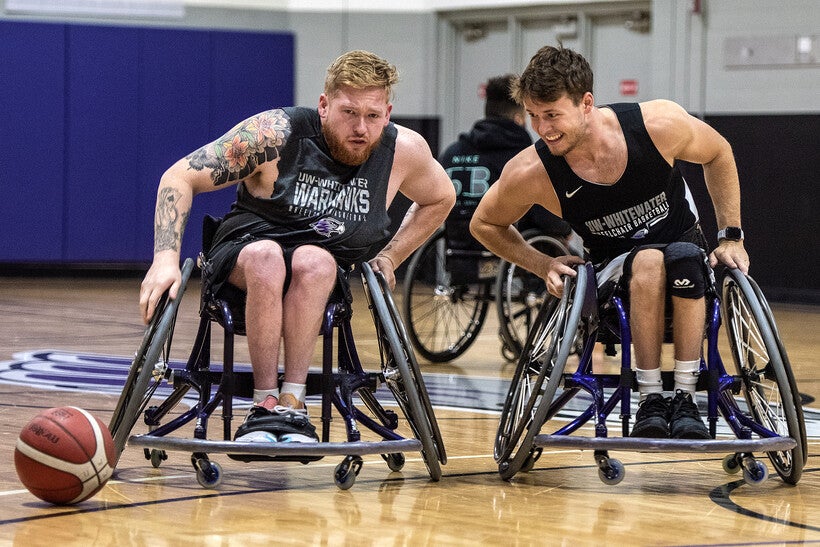 Dominant wheelchair basketball teams back in action at UW-Whitewater: 'They turn out Paralympic athletes like crazy'

When the United States won gold in men’s wheelchair basketball at the Tokyo Paralympics this year, Wisconsin native Christina Schwab was on the sidelines as a coach.

For the three-time Paralympic gold medalist, it was her first time coaching internationally.

She brought those lessons back to the University of Wisconsin-Whitewater, where she coaches the women’s wheelchair basketball squad. Schwab isn’t an alum, but she credits UW-Whitewater for much of her own success as an athlete and coach. When she was younger, Schwab attended camps at UW-Whitewater and later used its facilities for training. And she’s not the only successful Paralympian with ties to the school.

There were five former UW-Whitewater players on the Team USA squad Schwab coached in Tokyo. Between men and women, the school has won 16 intercollegiate titles in the sport since 1982. The University of Illinois at Urbana-Champaign may be the only other program that boasts a longer history of dominance in the sport.

A few teams might stand out when you think about the most successful programs in sports: the New York Yankees, the Green Bay Packers, the U.S. women’s national soccer team. UW-Whitewater wheelchair basketball could easily be added to the list.

And the teams are back in action after almost two years off due to COVID-19. 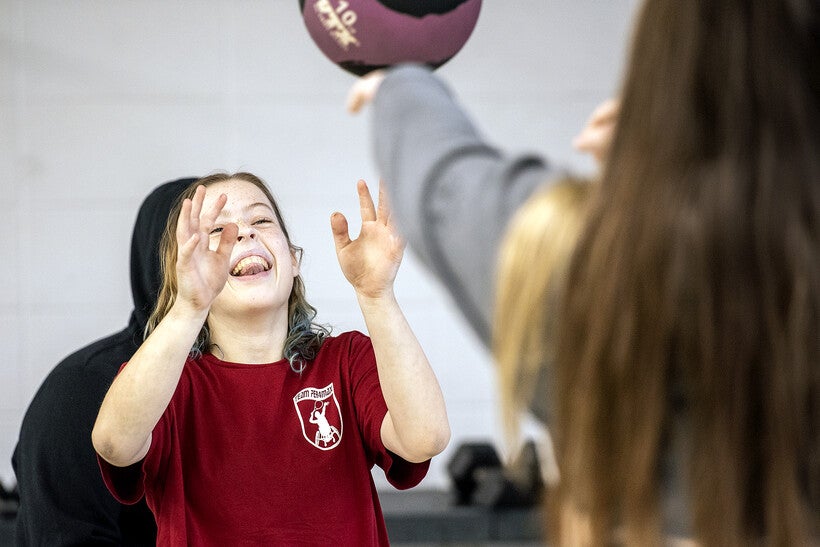 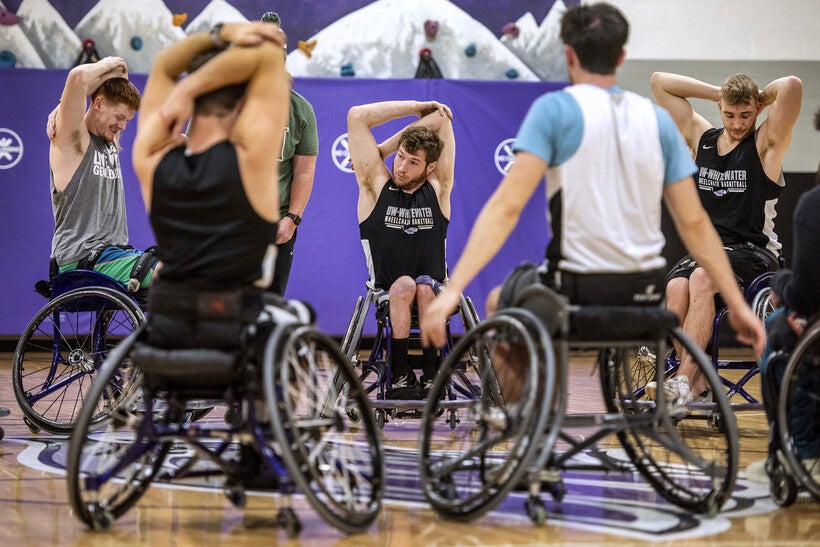 Adding to the legacy

Inside the Roseman Building on UW-Whitewater’s campus, there’s a glass case full of trophies and nets from important wheelchair basketball games.

"We're always in the championship games. We're either winning or we're getting second," he said. 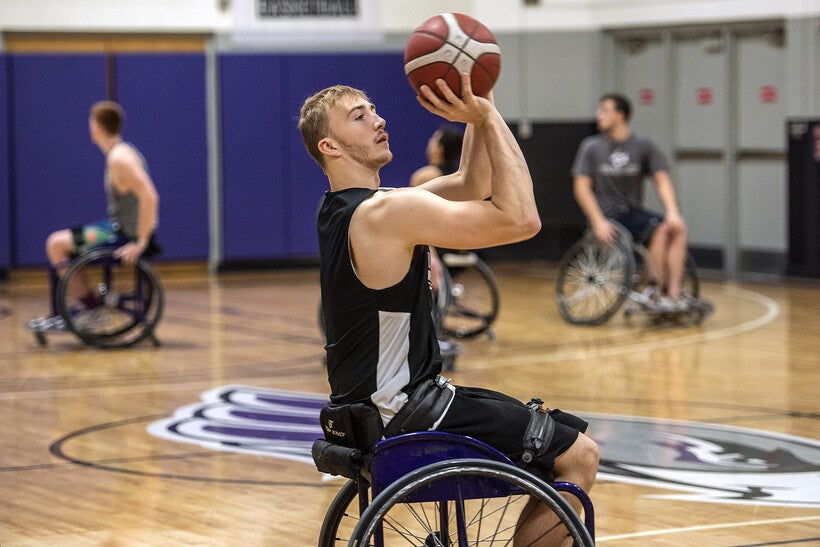 When freshman Cameron Poole was considering what sets UW-Whitewater apart from schools like the University of Illinois and the University of Alabama, it was the Warhawks' history of getting athletes to the highest level in the sport.

"We're a Division III school, so they can't offer athletic scholarships. They don't have all the big fancy facilities, but they turn out Paralympic athletes like crazy," he said.

"Just the legacy that other players left behind. Hopefully, I'll leave one of my own behind, too. Maybe, a championship or two, maybe three," Poole said with a laugh. "But it just feels great to play for a university that supports the wheelchair basketball team as much as the one here does."

The Warhawks began their adaptive recreation program in 1973, and almost a decade later, the men won their first national championship. The UW-Whitewater men and women last won titles in 2016 and 2014 respectively.

The women were actually preparing to play for their fourth championship when the coronavirus pandemic upended their season in early 2020, said junior Grace Altrock, who aspires to play in the 2024 Paralympics in Paris. Learning under Schwab and alongside top athletes has been invaluable, she said.

"When I was playing in juniors back in Nebraska, I always looked at Whitewater as a great school and always wanted to come here, and so when I was recruited, I was very excited and immediately applied to the school," she said. 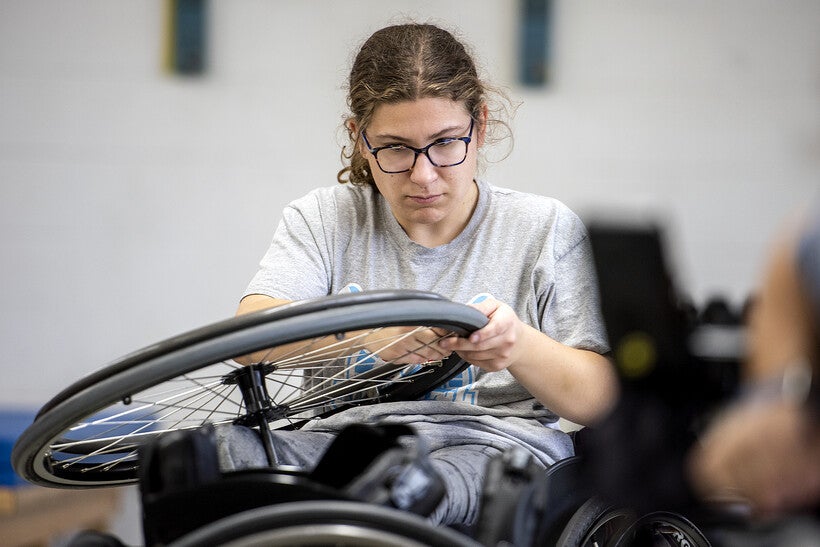 The basics of wheelchair basketball

Wheelchair basketball is just as fast and competitive as any other version of the sport. The only difference is that the players get better parking spots, Poole joked. The team practices five mornings a week, plus players are expected to fit in two lifting sessions and three scrimmages a week, he said. 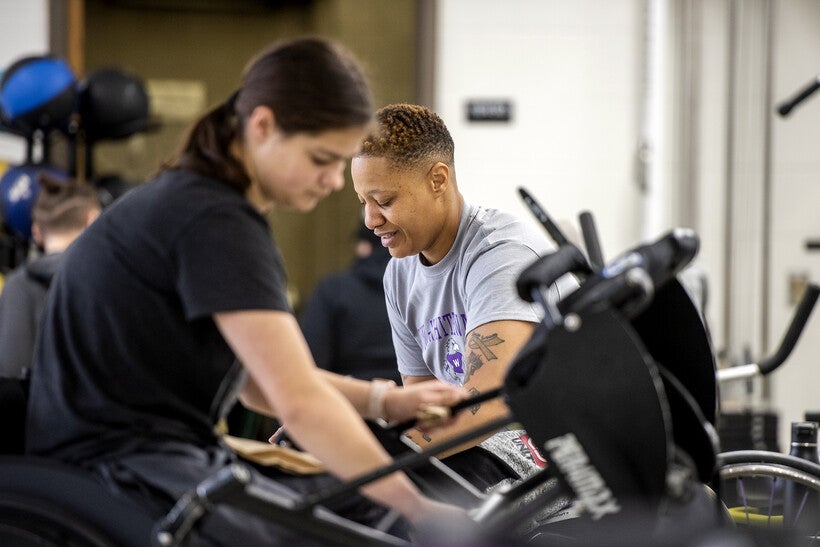 Le’Toi Adams, a UW-Whitewater wheelchair basketball player, works with other teammates to maintain the wheelchairs they use for the sport Friday, Nov. 12, 2021, in Whitewater, Wis. Angela Major/WPR 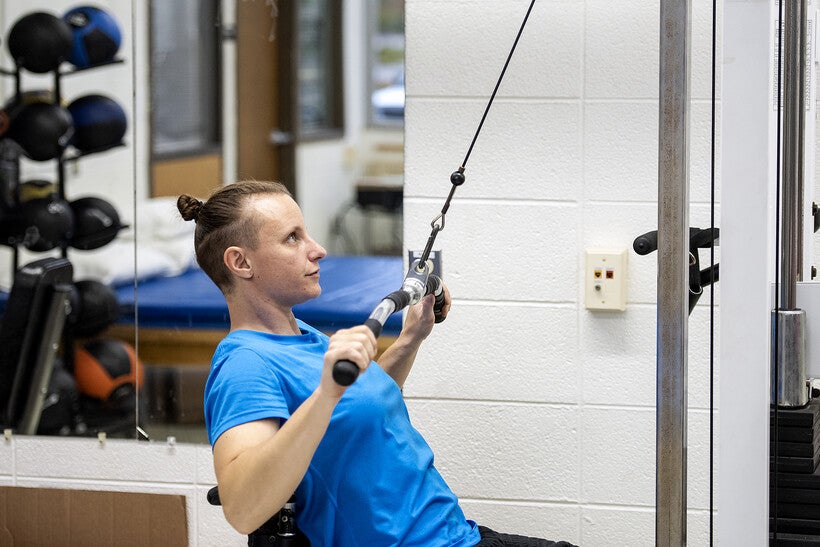 There are a lot of accomplished people with disabilities, said freshman Mada McCabe. "But I don't think that able-bodied people should find us inspiring for just living," she said. Wheelchair basketball players at UW-Whitewater are just like any other student-athletes at the school, she said.

"There are moments where we're all diving for the ball, we're falling over, we're crashing into each other, so it's very, very intense, and that's part of the reason I like it," she said.

There are no differences when it comes to the court or hoops used in wheelchair basketball. Players can double-dribble, but otherwise, the sport follows the same rules as the NBA, Altrock said. She’s been playing for 10 years.

"It really helped me because when you're in middle school, and you're disabled, you feel really left out of everything because you can't play sports," she said. "I immediately fell in love with (wheelchair basketball) knowing that there are people that are disabled like me and that I can do everything that I want to do, but I just do it in a different way."

After almost two years, UW-Whitewater's women’s wheelchair basketball squad will welcome teams from across the country for a tournament this weekend.

Schwab said she's excited her team will finally have a chance to play. She’s got a young squad that’s ready for some competition. They’ll take on the University of Arizona, Alabama and Illinois at the tournament.

Meanwhile, the men opened their season earlier this month winning all four games at a tournament hosted by Southwest Minnesota State University. They’ll welcome five teams for their home tournament, which begins Friday.

Some of Glatchak’s own favorite memories with the team are from the event.

"There's a whole gym cheering for you, and your first experience at a home tournament is just so much more fun," he said. "You have all your friends and family watching you play, and everything you've worked for, you can finally show it." 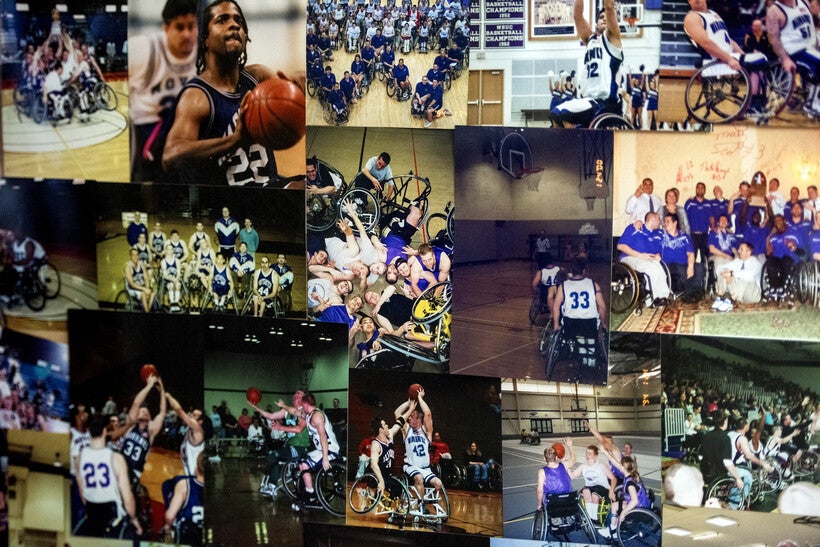 Photos of UW-Whitewater wheelchair basketball players are displayed in building where the men’s and women’s teams practice on campus Friday, Nov. 12, 2021, in Whitewater, Wis. Angela Major/WPR