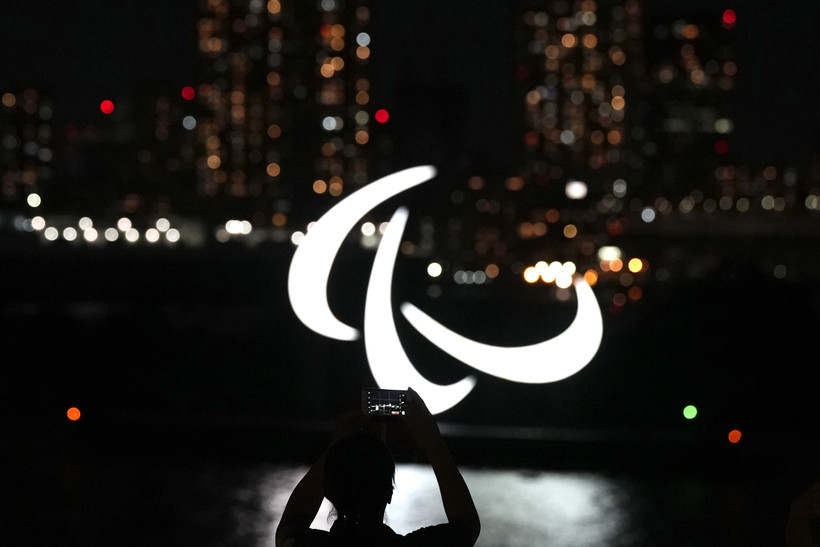 A woman takes a picture of the Paralympics symbol floating in the water in the Odaiba section in Tokyo, Saturday, Aug. 21, 2021. The Summer Paralympics starts on Aug. 24. Shuji Kajiyama/AP Photo

Team Captain: 'I'm So Pumped That It's Going To Be Televised In A Way Like Paralympics Has Never Been Televised'
By Megan Hart
Share:

His son Braxton was just 6 months old when Joe Delagrave won a bronze medal with the U.S. wheelchair rugby team at the 2012 Paralympics in London.

Almost a decade later, Braxton and his two younger siblings will be old enough to remember seeing their father captain the squad at the Tokyo Paralympics, which begins Tuesday.

At first, it was hard knowing his family couldn't travel to Japan due to a ban on fans at the games, Delagrave said. But just before leaving for Tokyo last week, the Wisconsin native was feeling excited, especially after a long year of extra training and managing COVID-19 protocols.

"I'm so pumped that it's going to be televised in a way like Paralympics has never been televised in the States," he said.

For the first time, NBC will broadcast primetime coverage of the games. Delagrave said he hopes Americans enjoy the fast and physical sport.

"I truly believe that Wisconsinites will really love this team," he said. "We're blue-collar. We work hard."

Delagrave grew up in Prairie du Chien and now lives in Holmen. He has had a long career in wheelchair rugby, with three world championship medals under his belt. He's part of an experienced team that's preparing for a Paralympics where some things will be different due to the pandemic. 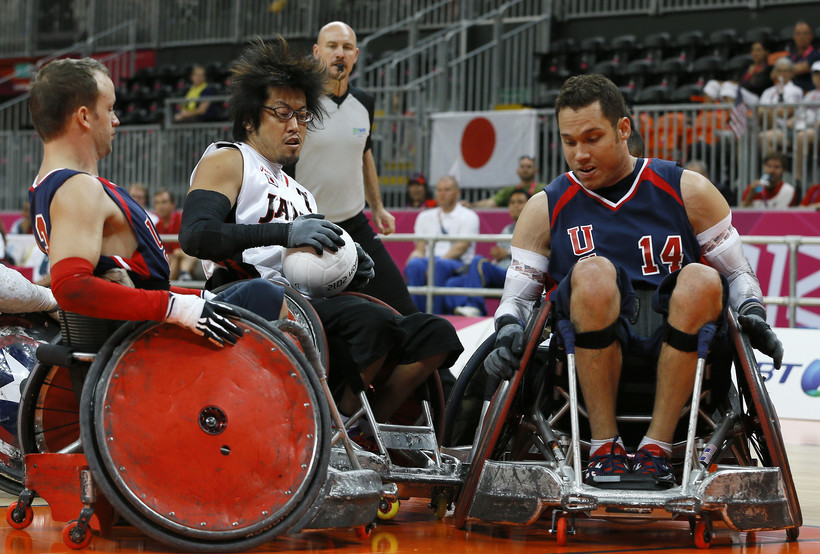 Daisuke Ikezaki, centre, of Japan is blocked as he attempts to score by Derrick Helton, left and Joe Delagrave of the United States during their bronze medal wheelchair rugby match at the 2012 Paralympics games, Sunday, Sept. 9, 2012, in London. Kirsty Wigglesworth/AP Photo

Six Wisconsin athletes will be competing at the games, including archer Lia Coryell from La Crosse. She finished fourth and seventh in her two events in Rio, where she made her Paralympic debut at 51.

They're among six Team USA athletes who played wheelchair basketball at the University of Wisconsin-Whitewater, which has one of the most storied programs in the country — with 16 national titles for the men and three for the women.

"We're a small school. We compete against some really big Division I schools, so we have people that come in, they want to put in the work, and they come to Whitewater because they know that being here, they have a chance to make it to a Paralympic level," said men's head coach AJ Messmer.

With its rich tradition, Whitewater has been able to recruit from all over the world. Women on the Dutch and German Paralympic teams played there, Messmer said.

Christina Schwab, head coach of the women’s team at Whitewater, is a three-time Paralympic gold medalist. In Tokyo, she will make history as the first woman to serve as an assistant coach for the U.S. men's squad.

Like Delagrave, Messmer is excited that Americans will have more opportunities to watch the Paralympics this summer. Many aspects of the game will look similar to Olympics basketball — with scores topping out near 100 and the court following the same measurements.

"Once people see it, I think they really connect with it," he said.