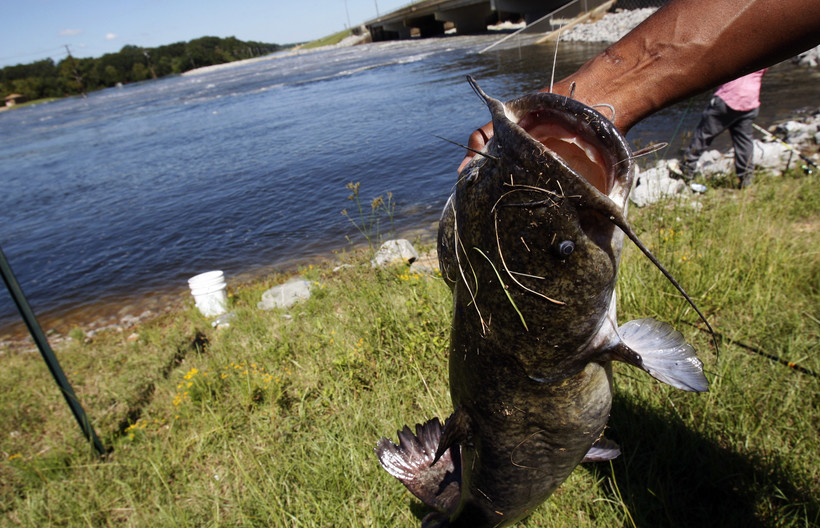 Area fishermen took advantage of the high water in the Pearl River directly below the Ross Barnett Reservoir spillway in Brandon, Miss., to pull in some big fish including this 35-pound catfish Thursday, Sept. 8, 2011. Rogelio V. Solis/AP Photo

Law Allowing Bowfishing, Hand-fishing Went Into Effect In 2017 Though No Regulations Set Until Now
By Rich Kremer
Share:

The Wisconsin Department of Natural Resources has enacted emergency rules to regulate fishing for catfish with bows, crossbows or by hand. Since spring of 2017, there were no regulations for the practice on the books.

In April 2017, state lawmakers passed a bill that allowed anglers to use bows and arrows, crossbows and their hands to catch catfish and rough fish, a category that includes carp. Hand-fishing, also known as noodling, is a practice popular in some Southern states where divers reach into holes in muddy banks in hopes that a catfish guarding its nest will bite, allowing the diver to pull the catfish to the surface.

While the 2017 law allowed the new methods for targeting catfish and rough fish, it directed the DNR to draw up regulations. Meredith Penthorn, DNR policy specialist for the bureau of fisheries, said until now, there were few if any regulations governing the practices.

Penthorn said for catfish, in particular, a lack of a season structure put them at risk of being overharvested during winter months.

"They will congregate in large groups in certain locations. They tend to return to the same locations year after year," said Penthorn. "So, when they’re in those large groups — without regulations — a diver could go in and take out more than would be responsible in order to conserve the catfish population in that area."

Penthorn said the DNR has no way of knowing how many catfish were harvested with bows or by hand since the 2017 measure went into law. A group called the Wisconsin Bowfishing Association announced a state record this May when a fisherman caught a 21-pound channel catfish with a bow and arrow.

The DNR’s emergency rules creates a season for noodling for catfish that runs from June 1 through Aug. 31. It also sets a bowfishing season that runs concurrent with the rough fish bowfishing season, which runs continuously throughout the state except in Menomonie, Forest, Oneida, Vilas, Iron, Price, Ashland, Price, Sawyer and Bayfield counties. There is no size limit for catfish caught by hand or bow and arrow.

The emergency rules also set a daily bag limit of one flathead catfish or five channel catfish per day.

While the DNR’s emergency rule is temporary and cannot exceed 270 days, Penthorn said the DNR will soon draw up permanent rules.