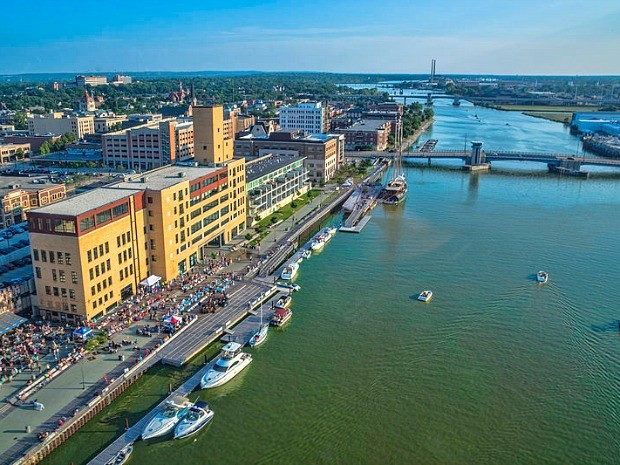 The Wisconsin Department of Natural Resources is offering municipalities around the state a total of $11.8 million to remove lead service lines that carry drinking water from public mains to individual homes and buildings. DNR officials admit this money isn't nearly enough to replace all the lead service lines in Wisconsin.

Even as an incremental effort, this program might have difficulty targeting the Wisconsin communities experiencing the greatest lead contamination in terms of scale and intensity.

The DNR's program is guided by its funding structure, with the money a municipality can receive capped according to population. Communities with populations below 50,000 can get up to $300,000. Cities with populations between 50,000 and 500,000 can get up to $500,000. And any municipality with a population greater than 500,000 — in other words, Milwaukee — can receive up to $1 million. The one exception to these caps is that cities can get additional money to replace service lines for schools and child-care facilities, though those funds would still come from the program’s $11.8 million total budget.

How much funding the DNR allocates to a municipality is based on many other factors, including whether its median household income is lower than the state's as a whole. The DNR can also factor high lead levels, but even a city showing greater need can't get more than the capped amount (excepting funds for schools and child care centers).

The population-based funding tiers provide some structure for reducing lead contamination statewide. In Wisconsin, more populous communities tend to have more lead pipes because they have larger water systems. But the correlation is not always direct. For instance, Wausau has less than half the population of Green Bay, but more than three times as many lead service lines, according to U.S. Environmental Protection Agency estimates.

At a broad level, the DNR program's funding caps create disparities between the proportion of the funding a city can get and its share of the state's lead service lines.

On one extreme is Milwaukee. As the only city eligible for $1 million, it could well end up getting the biggest share of the money. The DNR initially capped Milwaukee at $750,000, but on May 26 announced the increase to $1 million after a public-comment period that included objections from Milwaukee-based elected officials. But $1 million is about 8.5 percent of the total available funding, while Milwaukee has nearly 40 percent of the state's lead service lines (about 70,000).

In the DNR's May 26 announcement about the increase, agency Secretary Cathy Stepp noted Milwaukee could get up to $1.8 million in additional funding for replacing lead service lines at schools and day cares. This change raises the city's potential share to $2.8 million, or about 24 percent of the total funding.

The DNR arrived at this figure by estimating the number of licensed day cares in the city at about 500, multiplying that by a conservative estimate of what a partial lead service line replacement would cost, explained Robin Schmidt, who heads up the agency's environmental loans division. "If you add that plus schools, maybe it'll be a little more than that," she said.

Schmidt said the additional funding for day cares and schools is intended to protect young children, who are especially vulnerable to the long-term effects of lead poisoning. Of course, children can be exposed to lead-contaminated water at home, but because the metal builds up cumulatively in an individual's body, preventing exposure at every potential source can make a difference. Targeting locations where most people drinking potentially contaminated water are children is intended to increase the efficacy of lead pipe replacement program.

On the other end of the funding-vs.-need equation is Appleton, which has less than 1 percent of the lead service lines in Wisconsin, but is theoretically eligible for up to $300,000 in funds. Closer to the middle — with their more evenly matched percentages of lead pipes and potential funding — are Superior and West Allis.

Exploring the comparison between two other cities, Wausau and Green Bay, can illustrate why this type of disparity matters.

Home to about 39,000 people, Wausau can get up to $300,000 from the DNR program. Replacing the private-property segments of all the estimated 7,575 lead service lines would cost more than $22 million, based on the DNR's estimate that partial replacements cost about $3,000 each. The city replaces lead service lines on a gradual basis during roadwork, which, officials estimate, eliminates about 100 pipes per year. In contrast, Green Bay is eligible for up to $500,000, which isn't nearly enough to replace all its estimated 2,357 lead pipes. As a larger city, though, Green Bay has more resources of its own compared to Wausau, and it is in the midst of a $10 million effort to replace about 1,700 of those pipes. Therefore, even if Wausau actually gets the maximum $300,000, it will be well behind Green Bay in paying to remove a source of lead contamination from of its water system.

The middle tier of cities, those eligible for up to $500,000, fall into two distinct groupings. Racine, Kenosha and West Allis, all in the Milwaukee region, each have more estimated lead service lines than Green Bay, Appleton, Eau Claire and Janesville combined. Additionally, the Milwaukee suburb of Wauwatosa has just fewer than 50,000 residents, so it falls into the $300,000-cap category, but has an estimated 8,655 lead pipes. In other words it's not just the city of Milwaukee, but large southeastern Wisconsin communities more generally that face the greatest disparity between needs and the funds each could get from the new program.

The tiered structure of the DNR's program looks a bit different when one considers a different measure of need — the actual levels of lead found in the water. The smaller city of Lake Mills (population 5,798), eligible for up to $300,000, has 37 lead service lines, according to EPA estimates. However, this community has the state's highest instance of water samples containing more than 15 parts per billion of lead — the "action level" at which the EPA requires a municipal water utility to take additional testing and treatment measures to control lead. Lake Mills is a place where even $100,000 could make a big difference for some households, because that's nearly enough to replace the private half of all its known lead service lines.

Nearby Columbus, a bit smaller than Lake Mills but second in its rate of samples exceeding the lead action level, faces a bigger challenge. If Columbus secured its maximum of $300,000, those funds would cover the public cost of replacing the private segments of maybe 100 of its 365 lead service lines.

Even when service lines are replaced, lead doesn't necessarily vanish from a water supply. In fact, Madison, which replaced all its lines in an unprecedented $15.5 million project between 1995 and 2012, still has small amounts of lead in its water, according to 2014 monitoring results. Lead can enter the water from natural deposits in the ground and corrosion in pipes and other fixtures. Wisconsin's public utilities vary widely in the quality of their water sources and treatment processes. But lead service lines are the most common cause of contamination, and this problem doesn't always correspond neatly with population.

Municipalities have until June 30 to apply for funding from the DNR.