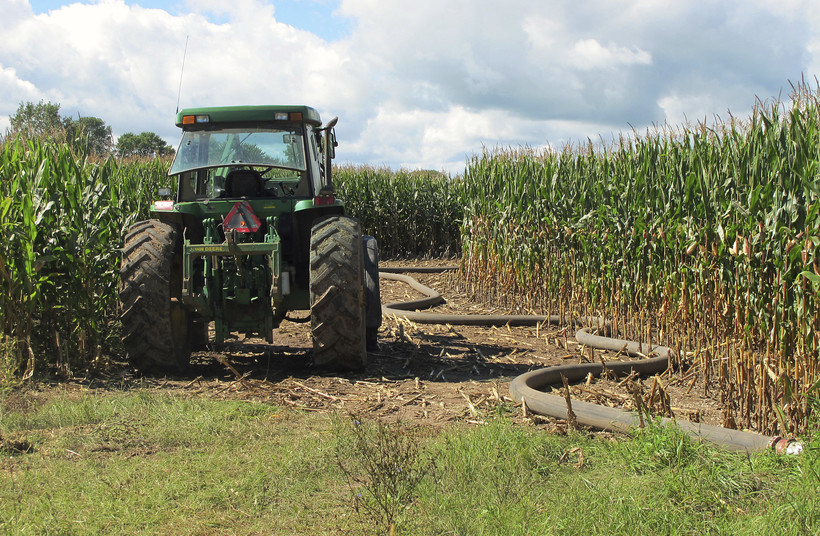 This Sept. 14, 2016 photo shows a tractor and a hose used to spread manure on a cornfield in Kewaunee County, Wisconsin, where nutrient runoff has polluted surface waters and drinking water wells. John Flesher/AP Photo

Manure May Have Been Culprit In Fish Kill In Sheboygan River
By Patty Murray
Share:

The Wisconsin Department of Natural Resources is investigating manure runoff in Fond Du Lac County that contaminated waterways and killed fish in the Sheboygan River.

The contamination was reported Wednesday but is thought to have happened Monday during a heavy rainstorm.

Redtail Ridge Dairy, LLC is believed to be the source of the manure, which might have been washed off its fields into creeks that run into the Sheboygan River. The farm milks 1,400 cows and houses younger cows as well, and spreads manure on several parcels amounting to roughly 2,000 acres.

Ben Uvaas is a wastewater specialist for the DNR who self-described himself as a "manure cop."

He said the manure has depleted oxygen levels in miles of local creeks.

"We have seen fish kills of minnow species like suckers, pickle backs in both of the unnamed tributaries and we've seen the same kind of species, a few of them dead, in the Sheboygan River," Uvaas said.

Uvaas added that, "it was probably a combination of the manure application techniques, the rainfall and the slopes of the fields that led to the runoff."

Uvaas also said a storage pit at a nearby farm may have overflowed during the rainstorm and contributed to the contamination. An investigation into that possibility is underway.

Depending on the outcome of the investigation, Uvaas said the farm owners could face civil penalties.