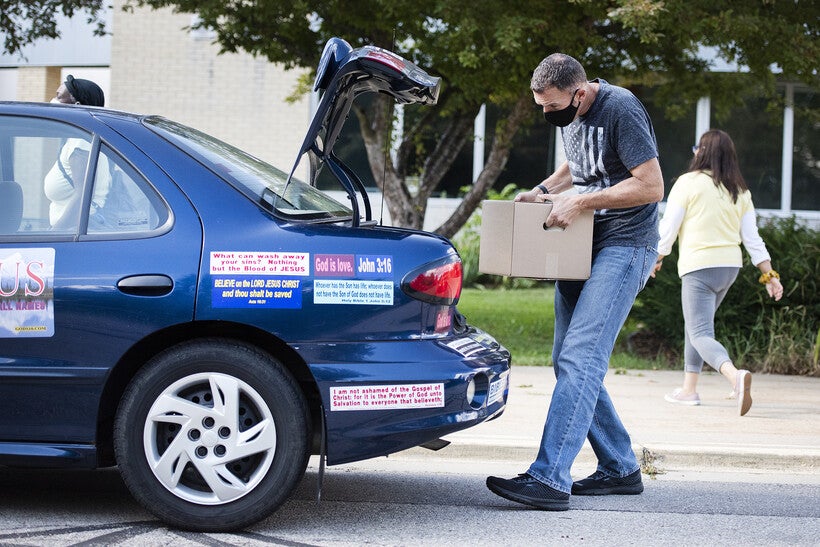 Volunteer Tom Jisa places a box of food in the trunk of a car Tuesday, Aug 4, 2020, at Westside Elementary School in Sun Prairie. Angela Major/WPR

Wisconsin Is Two Deaths Away From Hitting 1,000
By WPR Staff
Share:

New reports of COVID-19 cases declined in Wisconsin Sunday, one day after the state set a new single-day high.

The state’s Department of Health Services reported 621 new cases of the virus on Sunday, a number roughly half as large as the record 1,165 cases reported a day before. Sunday's data brings the seven-day average for COVID-19 cases to 804, which is down from the 871 seven-day average recorded a week ago.

The latest figures bring the overall total of positive cases in Wisconsin to 60,554 since the pandemic began, according to the DHS. A total of 998 people in Wisconsin have died from COVID-19, with two new deaths reported on Sunday.

According to DHS, 8.4 percent of all test results reported on Sunday were positive for COVID-19, which was down slightly from 8.9 percent the day before.

Wisconsin's daily testing capacity — based on the availability of test supplies and adequate staffing — has grown from 120 available lab tests in early March to 24,156 as of Sunday. The number of actual people with test results reported on Sunday was 7,418, down considerably from the 13,162 total tests reported Saturday.