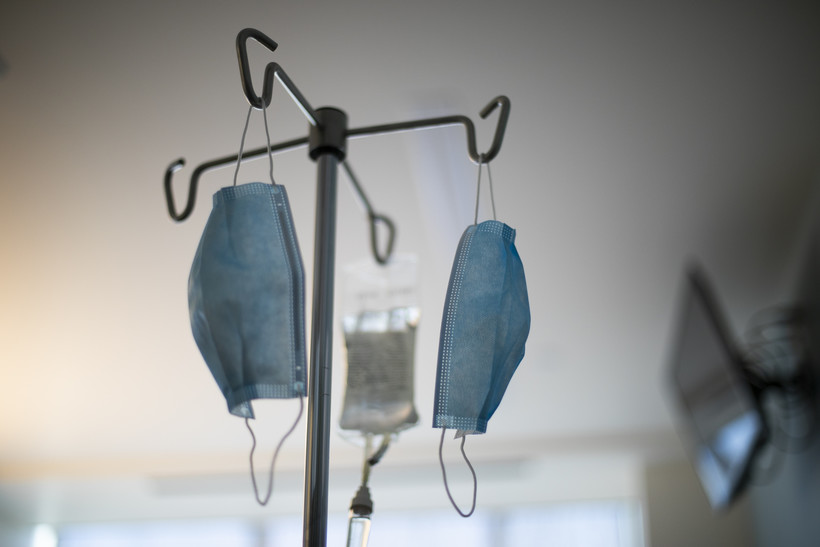 A patient receives an IV drip as face masks hang from an IV pole at a hospital in Portland, Ore., on Saturday, Aug. 8, 2020. Nurses and doctors in Oregon say they are finding little relief with coronavirus infections spreading at record levels, taxing the capacity of many hospitals. Jenny Kane/AP Photo

New reports of COVID-19 cases have started to dip in Wisconsin after hitting record-high levels last week, based on the latest data published by the state Department of Health Services.

DHS reported 3,095 new cases of the disease Monday, bringing the average for the past seven days to 5,859 daily cases. Less than one week ago, on Nov. 18, the state broke a record with a seven-day average of 6,563 cases.

The case total for Monday is less than half of other one-day totals reported by the DHS recently. But it's typical for DHS to report lower numbers of confirmed cases on Mondays, with labs often posting fewer test results the day before.

There were six new deaths from COVID-19 reported Monday, while 9,196 people tested negative.

Of the people who got tested for COVID-19 over the past week, 29.3 percent were positive for the disease, according to DHS. That rate has been on the decline since Nov. 12 when the seven-day average peaked at 36.5 percent.

On Sept. 30, DHS also introduced an alternative positivity rate, one that measures the percentage of tests that are positive, instead of the percentage of people who get a positive result. The new metric takes into account people who have been tested multiple times. The seven-day average for that number is at 13.3 percent. That's down from a high of 18 percent Nov. 12.

According to the Wisconsin Hospital Association, there were 1,988 COVID-19 patients hospitalized as of Sunday. A total of 15,930 people have been hospitalized because of the disease, or 4.5 percent of all positive cases according to DHS.

The latest figures bring the overall total of positive cases in Wisconsin to 357,771, according to DHS. A total of 3,011 people in Wisconsin have died from COVID-19.

COVID-19 activity varies from county to county. The latest activity data from DHS, released Wednesday, showed 71 counties had a "critically high level" of COVID-19 activity, while only Green County was listed as having a " very high" level of activity. Wisconsin overall had a "critically high" level of activity, according to DHS.

As of Wednesday, the Northwest region of the state had the most new cases per capita, as well as the biggest increase in new cases.

Wisconsin's daily testing capacity — based on the availability of test supplies and adequate staffing — has grown from 120 available lab tests in early March to 59,169 as of Monday. The number of actual people with new test results reported Monday was 12,291.