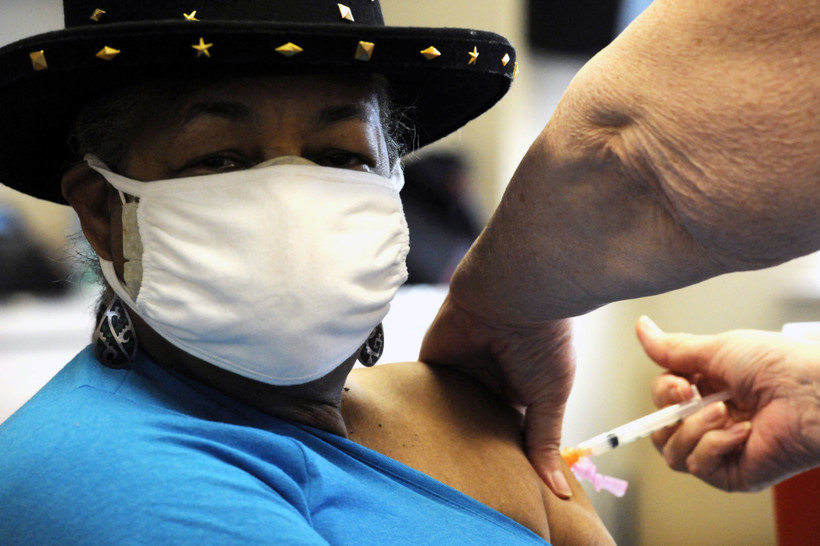 Georgette Moon receives a COVID-19 vaccine at the county health department in Tuskegee, Ala., Monday, Jan. 25, 2021. The clinic has yet to reach its maximum capacity for immunizing people in the mostly Black city, the site of the infamous "Tuskegee syphilis study," that ended in 1972. Moon, a former city council member, said she wanted to both protect herself and be a role model to encourage others to get the shot. Jay Reeves/AP Photos

New reports of COVID-19 cases have continued to decline since an early January surge in Wisconsin, based on the latest data published by the state Department of Health Services.

There were 40 new deaths from COVID-19 reported Tuesday. It comes after a temporary dip with three deaths reported Sunday and one Monday. On Tuesday, 2,087 people tested negative.

Of the people tested for COVID-19 over the past week, 19.7 percent were positive for the disease, according to DHS. That rate has been on the decline since early January, when the seven-day average peaked at 32.3 percent.

As of Tuesday, 578,335 doses of vaccine have been administered, and 107,860 people have received both shots, completing the vaccination series.

Last week, Wisconsin vaccinators requested nearly 300,000 doses of vaccine, according to DHS Deputy Secretary Julie Willems Van Dijk. The state was able to fulfill 27 percent of those orders, using a formula to determine where its limited amount of vaccine goes each week, she said.

"This week we made some changes to ensure that we were equitably distributing the vaccine across our state," she said.

Some Wisconsin Walgreens will receive direct-to-pharmacy shipments of vaccine next week, Willems Van Dijk confirmed. It's part of a plan announced Tuesday by the Biden administration to expedite the vaccine's rollout across the country.

The coronavirus pandemic has disproportionately impacted minority communities. On Tuesday, DHS officials said the agency has plans to begin releasing data showing the racial and ethnic breakdown of vaccine distribution.

"Much of our demographic data to date has been largely reflective of our first population, group 1a, which was largely health care workers and residents of long-term care facilities," Willems Van Dijk said. "So now as we move into a much broader population, people over age 65, our demographic breakdowns by age, by gender, by race and ethnicity will start to be a bit more representative of the population as a whole."

According to the Wisconsin Hospital Association, there were 686 COVID-19 patients hospitalized as of Monday. A total of 24,460 people have been hospitalized because of the disease, or 4.5 percent of all positive cases. That includes more than 100 new hospitalizations Tuesday.

The latest figures bring the overall total of positive cases in Wisconsin to 544,260, according to DHS. A total of 5,937 people in Wisconsin have died from COVID-19.

Wisconsin's daily testing capacity — based on the availability of test supplies and adequate staffing — has grown from 120 available lab tests in early March to 59,273 as of Tuesday. The number of actual people with new test results reported Tuesday was 11,374.